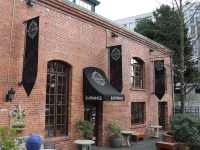 3.75/5  rDev +1.9%
vibe: 3.5 | quality: 4 | service: 4 | selection: 4 | food: 2
The location down by the water is great. On a sunny day you can sit on one of the patios and look across the upper harbour to Esquimalt. It's an old red brick building with wooden beams in the roof and big medallion panels. The inside is spacious and airy but with a crowd inside it gets pretty noisy. During a summer's day the guets are mostly tourists and, in the afternoon, afterworkers. Most of them were drinking lagers or the seasonal wheatbeer with a lemon twist. The bartenders I spoke to were perhaps not as proficient in the brewing process as I had expected. But they were professional enough to offer samples before I ordered. I tried two of their speciality beers: Rock River Bitter and Beaver Brown Ale. They were both fresh and good but perhaps a bit muscled on the taste notes.
Aug 19, 2007
More User Ratings:
Rated: 3.88 by Needmorebeer312 from Washington

Reviewed by Mehinaman from Washington

Rated by N_E_Beer from Canada (BC)

Reviewed by EspressoGuy from Canada (BC)

Huge sunny deck to enjoy sunny days, fun post/beam rooms inside if it's not so sunny. It's a cool place to hang out that's for sure. And the service is friendly and attentive. If only the beers were good it would be so much better. I tried the 6 beer taster and didn't like any. Especially disappointing was the Saison which was didn't resemble any Saison I've tried: it was like a sour pilsner. Too bad. As a matter of fact, all the beers tasted "green" and disjointed.

Second time here and I felt the same way both times.

3.2/5  rDev -13%
vibe: 4.25 | quality: 2.5 | service: 4 | selection: 2.5 | food: 4
An interesting place. Atmosphere was really nice, I would describe it as an upscale pub environment. The food was quite good as well. But the beer was fairly bland, which is even more disappionting when compared to the quality of other Victoria locals. Only 4 regulars plus one sesonal were pouring.

Service was quick and friendly. Prices were good as well.

Overall, I would say that if not for the good atmosphere and the food, this is not worth even visiting as the beer doesn't hold up to the local competition.

Reviewed by ritzkiss from Canada (ON)

3.75/5  rDev +1.9%
vibe: 4 | quality: 4 | service: 4 | selection: 3 | food: 4
Nice spot on the harbor. Big wide open space, bistro/gastopub feel. Exposed beams, wide open serving room, stools and high tables. Was there for lunch during the week so it was comfortably quiet and laid back just as I like it. Just their 4 regular offerings on tap with their one seasonal, $6.30 for a pint which is within the range of reasonable in Canada. Beers range from so-so to really good (get their seasonal offering!). Food was a step above good, has one of their pizzas which was quite nice. I'm sure in the evening it caters to more of an upscale clientele but a nice spot for lunch. Nice place but not a must stop.
Oct 21, 2010

Reviewed by TheStove from Illinois

3.41/5  rDev -7.3%
vibe: 3 | quality: 3 | service: 4 | selection: 3.5
Nice spot on the water in Victoria. Has an upscale brewpub atmosphere with posh looking lighting and nice tables. Definitely seemed like one of the "places to be" as there were a fair amount of people dressed to hit the clubs. Bar area is a little thin on space, fitting 25-30 people but as with most places eventually you'll be able to grab a spot.

Service was great, I asked for a beer list but the bartender just told me the list from memory with a very short description of each.

The beers were good and featured all in-house brews. The selection was ok, typical styles including a wheat, pale ale and brown ale. The brown was flavorful. The standout was the Honey Wheat seasonal they had. Despite the name it was very flavorful with an awesome mouth feel and a bit of a bite. The citrus and honey flavors came through loud and clear.

At $7 for a proper pint I'm unsure about the value. The beers were good but not outstanding.

Reviewed by josiahschlender from Oregon

Canoe was my first stop and gave me a good impression from the start. It's set in a very cool old building that has been tastefully updated. I liked how the pub didn't have as crowded as a feel as many other places I have visited. The tables weren't so close together that you felt like you were intruding on your neighbor's date night.

I tried Canoe's ESB and brown ale. (Which I will note, also make an appearance on the other two brewpubs. It seems like they stick to their British brewing roots.) Both were quite good. In fact, while neither style is one that I usually go out of my way to order, they both were among the best of their styles I have tried. The brown was very malty, roasty and rich, bordering on a Porter. The ESB was expertly balanced with really nice caramel malts and citric, grassy hops.

I believe Canoe only had five of their beers on tap, kind of disappointingly low. I'd love more selection, but I'm glad that at least it seems they are getting the ones they are brewing right.

The food I tried was pretty good. I split a London broil daily special and crispy dry ribs appetizers with my wife. While I wouldn't order the ribs again, I tried them more out of the curiosity because I've never seen them yet they seemed common on menus in Victoria. The place was only about half full on a weekday evening, and our server kept up with us just fine.

Prices were comparable to the other places I visited. Better if you make it there for their appy hour, which seemed one of the better ones in town. However, all prices, including the "appy" hour were quite a bit more than I'm used to Portland Oregon prices, especially the extremely good happy hour deals to be found around here.

All in all, a solid place to visit in Victoria. Don't miss this one if you are in town.

Reviewed by Voonder from Canada (AB)

3.83/5  rDev +4.1%
vibe: 4 | quality: 4 | service: 4 | selection: 3.5 | food: 3.5
It's a very nice place. Kinda odd location - lots of homeless people around, but building is nice, both outside and inside and it was really busy on tuesday night. Service was really good, our server was very promt and helpfull. We just had an appetizer there - calamary, it was different, but pretty good. The pub fare on menu looked regular.
Beer was good too, hefeweisen was outstanding. Brown ale was pretty good, but I found it beeing more stout than ale.
Overall - really nice place, we'll be back for more beer

Reviewed by doubleipa from Georgia

3.15/5  rDev -14.4%
vibe: 4 | quality: 3 | service: 3 | selection: 3 | food: 3.5
Hit this after we had a couple of pints at Swan's. I think most every pub/restaurant we hit in Victoria and Vancouver has massive exposed beams. Anyway, things did not get off to a great start when I asked the waitress if the IPA was a British or West Coast version. Here response was, "Well since we're on the West Coast, it must be a West Coast IPA". It was not. It was a British version and not a very good one at that. The food was average. The best part, I guess, was the atmosphere.
Oct 16, 2006

Reviewed by sinistermadman from Oregon

3.8/5  rDev +3.3%
vibe: 4.5 | quality: 4 | service: 4 | selection: 3 | food: 4
I was in Victoria for only one day in my stay in B.C., and this was the brew pub I decided to go for. It was rather sunny and temperate when I visited so I was stationed on their outdoor patio which has a good view of the marina. Quite nice. I visited the inside of the establishment to check out their digs. Nicely appointed building with a huge timber frame and red brick exterior. The place definitely has some character. I had lunch and ordered the BLAT. Very good. I had their ESB and brown ale, both of which were above average in quality. Nothing to write home about, but quite respectable. Service was attentive and generally well informed on the beer selection, which was only about 4-5 beers.

It may be just me, but beer prices in Canada are exorbitant. Provincial taxes or not it makes for an expensive outing unless you hit a happy hour. Seeing as how I live in the states I guess my "value" rating on this particular establishment is a little off base. Regardless this place is well worth a visit if you are in the area.

Reviewed by canucklehead from Canada (BC)

3.93/5  rDev +6.8%
vibe: 4.5 | quality: 4 | service: 4 | selection: 3.5 | food: 4
Stephenlouis took me here as part of a whirlwind Victoria pub crawl.This pub/ restaurant was a very cool spot with its high girders and beams and cool modern feel. The beers were not bad with the Siren's song Pale Ale being the must have. Buy a bottle on your way out. The service was charming and fast with $5 appys being a midweek special. The pizza I had was thin crust and very nice for $5 and the calamari was crisp and fresh. All in all a great Victoria spot to have a meal and a pint. It also might be said that on a weekday this place was hopping while other pubs I visited that night were less than busy.
Jul 11, 2004

Reviewed by saskguy from Canada (SK)

The brewer used to brew at Swans (along with his brother who is now with Lighthouse Brewing, I think).

RIght across the street from Swans, along the waterfront. I wish they were a little more agressive with the flavours.