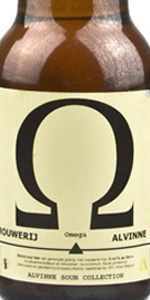 Notes: Flemish Sour Ale fermented with our own wild house yeast strain 'Morpheus'. We've been brewing the barrel aged version of this beer, Wild West, for quite some time. We recently decided to bottle the non-barrel aged version as well, as one of the Greek trilogy (together with Sigma and Phi). If you are looking for a drink that is refreshing and effervescent, you have to try
View: More Beers | Place Reviews
Recent ratings and reviews. | Log in to view more ratings + sorting options.
3.79 by edthehead from New York on Dec 26, 2021

Funky 33ml bottle with best by 12/20/22. Says mixed fermentation on the bottle and I see it’s classified as a wild yeast ale. Bubbled up out of the bottle when opened. Says fermented in stainless on the label.

Appearance: hazy orange, grainy white head that persists.
Smell: fruit or wine vinegar
Feel: light, little carbonation
Taste: immediate sour edge, sharp but enjoyable. Woody as if from a foeder but with a beech quality. Grapes and grass. Sour aftertaste that lingers and a bit of astringency.

Very interesting but not something I’d buy again. I would try other ales from this brewery.

This one pours a clear dark-ish orange color, with a small head, and lots of lacing.

This smells like green apple, pear, citrus, and white wine.

Even though this isn't barrel-aged, it still tastes like it touched a wine barrel in some way. Their house yeast strain is super expressive and tasty, with stone fruit, grape, green aple, pear skin, and hay.

This is very crisp and refreshing, and quite drinkable, with a slightly lingering acidity on the back end.

This is very pleasant - it feels both subtle and bold all at the same time.

Pours a hazy, deep golden amber coloration with a large, foamy head. Smells of biscuity wheat malt and estery yeast notes of green apple and mild peppery spice, with hints of peach and white grape. Taste is a great balance of biscuity wheat malt, estery yeast notes of tart green apple and peppery spice and some lighter hoppy notes of peach, white grape and grass. Finishes with quite dry, with a very light bitterness, mild tartness and some green apple notes lingering in the aftertaste. Smooth mouthfeel with a medium body and carbonation.

A very pleasant Belgian Sour Ale that just has a great, mellow balance going on where nothing really stands out too much and everything complements each other very well.

-hazy pale brown bottle pour with a tall foam cap that dissipates quickly. The aroma is vinous and moderately acetic. The flavor is lightly sour with grape and woody notes. The bottle is over carbonated so the mouthfeel is too fizzy ( a particular bottle issue).

A: Citrus, lemon zest, moderate funk, with a vinous finish.

M: Medium-light bodied with light carbonation with a soft mouth-feel and a light, but pleasing acidity.

O: Tasty; the beer is very well balanced with an interesting aroma and satisfying finish.

Another bottle from the depths of The Bottle Backlog here at Chez Woody is making its presence known!

I Pop!ped the cap & having read that last, I preferred to keep it in the bottle, so I performed a VERY gentle pour. Once sufficiently decanted, an in-glass swirl raised two-plus fingers of soapy, foamy, rocky, light-tan head with decent retention. Nose was bringing the funk! My uncle made a batch of Strawberry-Mint wine once that had a nose just like this! Eau de Open Sewer Pipe was how we described it. Morpheus? Who can sleep with that smell pervading the room?!? Call the manager! Color was a gorgeous Amber to Deep Amber/Light Copper (SRM = > 9, < 13) with NE-quality clarity. Mouthfeel was medium. The taste was MUCH better than the nose. You know what they say - if you can get past the smell, you've got it licked! The taste was oddly tangy to go along with a pronounced lemon-lime tartness, but it slowly edged its way along the base of my jaw to the hinge, where it settled in for some real sourness. It was like the bridge between puckeringly tart & simply sour at the hinges of my jaw. I would NEVER characterize myself as being into Tart/Sour beers, but I have drank & reviewed enough of them to be able to recognize the difference. The terms are not interchangeable, but in this case, I was getting some of both. I even felt like I tasted some saltiness in there, especially at the finish. Finish was quite dry with a lingering summer fruitiness of strawberry, red raspberry & blueberry. Phew! I had been kind of afeered to try this one, but its aging probably helped a lot. The BB date was Jan 2019 with a Lot of 830. You might want to sit on yours.

The scant head is short lived and rocky over a clear, rich amber brew.

Sweet apricots fill the nose before turning quite sour. Brine turns to oak followed by pronounced fermented apples. Warmth brings out grapes with a floral background. Also noted was pepper and mango. The progression here is amazing.

The flavor is fresh and fruity, reminiscent of the juices from a fruit salad. Mild tartness brings out lime and mango, while sweetness becomes a balance. The finish is mildly sour and lingering. Subtle flavors develop throughout.

The texture is silky within a light body and fine carbonation. Alcohol is as anticipated with pleasant astringency and an almost dry finish.

This beer is quite mild for the style, but is elevated by diverse and subtle character. It is refreshing and relaxing, providing a calming influence. I imagine it would go well with camembert cheese.

Bottle dated Sep 2016. Pours a cloudy darker yellow golden color with white head. Funk, tartness, citrus, and other light fruits on the nose; follows onto the palate. Medium bodied. Finishes with a mild acidity from the tartness, little citrus and some oaky notes.

Carefully decanted leaving a mildly hazy with a reddish amber hue. There is a thin bead of bubbles at the edges of the glass, but very little head formation. Acidity in the nose giving an impression of sour apples, vanilla, and orange marmalade. The taste has a less acidic presence. Less fruity as well. Mild flavor in general. Finishes with a mild tannic and acid impression. Mouthfeel is fairly thin. I'd like to see a higher level of carbonation as this borders cask level carbonation. The flavor leaves me wanting as well.

Smells of lightly sour yeast and then some nondescript grain. Pretty bland overall, in spite of a decent little burst of sourness.

Tastes like it smells. Good, fruity sour punch up front, rather limp middle and finish. Nothing bad, but not worth the price of admission.