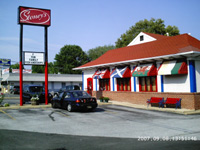 View: Place Reviews
Reviews: 3 | Ratings: 6 | Log in to view all ratings and sort

Stopped here with DarkerTheBetter on a Wilmington road trip.

Ah a British themed pub. The sign outside says "A Little Brit Different." Kudos to a place so serious about being British that they even have the dry humor part down.

Atmosphere was good, albeit dead of customers. Kind of dank in the sense that it was dark and not very "party-hardy." Notable beers are tap were Strongbow Cider, Boddingtons, Smith wicks, and Tetley's. There were more but nothing that you couldn't find at your local watering hole. Mister Ed got the Strongbow and was gracious enough to let me have a sip. Good stuff and I thought that was cool that they had a cider on tap.

Overall a decent bar, and if it was closer, I would probably pop in every once in a while to check out if their taps rotate. If I'm in the area again, I can't see a reason why I wouldn't stop in.

I stopped by with the leftmindedrighty during our tour of Wilmington and wasnt disappointed.

The building itself was probably a fast-food restaurant at one point in the past, but theyve done wonders with it. The entry way has some odor issues that may be just a one-time issue but past that, things were nice and clean. With bricks, dark hardwoods and a British them to the place (photos of the Beatles and other British bands along with albums, British beer, football on the box (soccer on tv), British fill-in-the-blank), I was a bit impressed. Cozy for sure.

The bartender admitted to not knowing about beer, but she was very eager to help and was quick with our drinks. I went for the strongbow as it was a hot day and A-ron went for an organic brew by Tetleys. Turns out, his was $10, which seemed high. At first, I thought this place shouldnt be on BA as there are mostly big name imports on tap, but he bottle list suggests otherwise. There, we found (here goes my spelling) Chemey, Golden Promise, Hobgoblin, Mackeson XXX, McEwans, Monte Python, Old Peculiar, St. Peters, Wychcraft, Lindmans, and four selections of Sam Smith. Not bad overall.

Not a bad place. I would count this as an asset if I lived around the corner.

Overall, I really like Stoney's, and I don't go there as much as I probably should. The atmosphere is nice, as long as there is not some important sporting event on those high-def TVs. I really like how you can see the brick wall on the inside of the joint. Also, the front door being painted red like one of those British phone boothes was something of a novel ploy. The bar is a nice, polished hardwood that appears to be red oak, although the lighting defintiely makes it harder to judge. But the armrests on the bar are comfy at any rate. It can definitey get fairly crowded on some weekends, although if you hit it at the right time, there will usually only be around a dozen people or so.

The service is attentive and friendly.

The bar offers a decent selection of beer from the UK, although sometimes it's hard to know what they have, as the bottles are all hidden in a fridge. On tap they have Guinness, Boddington's, Strongbow Cider, Smithy's, Bass, Harp's, and Stella. I noticed that the fridge contained McEwan's Scotch Ale, although it was hard to see what else was in there. I will say, however, that they had about two dozen different varieties of Scotch and Irish whiskey.

In terms of food, think "pub grub" and you'll get a good idea. The fish and chips are good, and the sausage rolls are pretty solid.

Overall, it may be a bit pricey for what it is, but it's a nice place, and the food is decent, and you can play darts and watch some highdef TV.

Stoney's British Pub in Wilmington, DE
Place rating: 3.89 out of 5 with 6 ratings