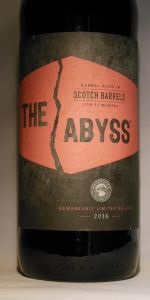 Notes: The most multifaceted liquid truffle ever fashioned. Dark cherries brined in light peat smoke and popped into the heart of a prune. Then drizzled with toffee and flamed caramel, crusted with white and green peppers, and dipped in honey infused molasses. This beautiful construction is then delicately coated with rich dark chocolate and finished with a luxurious coating of milk chocolate and a dusting of cocoa powder and gold flakes. Served on a chard shard of oak with three sultanas and pieces of vanilla suffused marzipan.
View: Beers | Place Reviews
Reviews: 71 | Ratings: 227 | Log in to view all ratings and sort
Reviews by aleigator:

Pours entirely black with a medium sized, dark brown head, which leaves back a thick layer of lacing. After swirling the beer, it reveals an oily, bubbly viscosity as an initial sign of its heavy body.

Offers a truly remarkable nose, which inherits an almost meaty characteristic, resulting from copious amounts of peaty smoke. Then there is the abyss typical blend of slightly spicy molasses and bitter chocolate, which get enhanced by a roasty maltiness and lots of char from the barrel. This peaks with a sudden appearance of honey, which gets highlighted and then swallowed by the barrel. This smells superb.

Mouthfeel is fuller, soft and creamy with a silk texture to it, finding a challenging antagonist in the extremely long lasting barrel, providing the tongue with a mixture of char, smoke and alcohol dryness.

Tastes sweeter than expected, with an early interplay between earthy toffee and sugary caramel, topped off by an untamed blend of tobacco and licorice. From this, the barrel arises in a truly uncompromising fashion, adding more earth, moldy wood, burned oak and salty campfire to the flavors. Once the barrel hits the tastebuds, it won‘t leave em till the finish, while creating a wonderful flavor intensity, underlined by skandinavian licorice.

Wow, I love the extravagantly impression of warming char in this. Usually Scotch barrel beers tend to suffer from an unpleasant tar characteristic which alters or overpowers the base beer. Thats not the case in here. In fact, the opposite happens, once heat, smoke, tobacco and licorice go hand in hand, a wonderful complexity unfolds perfectly balanced on the palate.

Look: black body with a dark brown head.
Smell: chocolate, molasses figs
Taste: chocolate, oak, scotch, smokey, the chocolate and scotch taste stands out the most.
Feel: full bodied, little carbonation, slight alcohol burn at the end.
Overall: I have always seen beer aged in bourbon barrels, and occasionally rum barrels, never in scotch. If I ever find another scotch barrel beer I will buy it. Would I buy this beer again? No. This beer is great, the only drawback is the price, I could buy a case of Yuengling bottles for the for the price of one bottle.

With the promise of a smoky char and an earthy boggish influence, the Abyss that basques in the glory of scotch whisky barrels emerges with a peaten, peppey glow. Notes of cigar wafts about as this version of Deschutes' fames imperial stout carries those complementary char and earth nuance.

Dark as night, the stout's appearance is one of blackness and depth at the onset of the pour. With a creamy tan head building above, the aroma is roasty, toasty, and of burnt sugars, cream and whisky. As its taste soon trends toasty, peaty, espresso-like, its middle palate is bold with cocoa, whisky, pepper and cream. Trending rich and decadent, the stout finishes toasty, malty-sweet and rife with vinous wine and sherry.

Walnut oils and dense fresh roasted coffee flavors stand out while the beer's luscious and accommodating taste thwarts any lackluster character. Instead a long boozy molasses linger brings a strong current of burnt toast, sherrywine, drunken oak and a kiss of peppery earth.

When you think of the most intense possible stout appearance, The Abyss should be up there. Scotch Barrel Aged Abyss fits right in its predecessors mould, pouring pitch black and sludgy right out if the bottle. It looks dense and completely empty yet clean. The darkest tan foam head sits on top for moments before receding into a fine creamy ring around the glass, and rivers of film across the surface.

This version is exceptionally boozey, even after over a year residing in its bottle. Booze, toasted oak, and chocolate are complimented only by an unrecognizable roasted dark fruit. However, as it warms, a subtle amount of dark roast coffee is able to penetrate the scotch boozey depths from below.

Each sip is more intense than the last. Burnt brown sugar, molasses, and heavily toasted white bread are most recognizable. Baker's chocolate then nutmeg and cinnamon follow along with an almost mild Chile like taste and spice. Sweet and smokey oak take the stage along with a slap of alcohol for the final bow.

The feel, in one word... Intense. About as intense as it gets. Slick, rich, full, and oily, followed by tingly, spicy, woody, and boozey, and finally dry and roasty. My lips feel like they are plastered in sticky syrup, and it almost hurts to separate them for another sip.

I have had a few Abyss variants now, but still feel the original reigns king. This might be the close second. It is so intense, and perhaps a little too boozey, but it's wonderful nonetheless. First time I haven't shared a bottle, and first time I'm saving the rest for tomorrow. Cheers.

The dark fruit flavors are considerably more prominent in this variant as opposed to the regular abyss. This one also lacks the depth and complexity of flavors and aroma that the regular Abyss has. And that is the sole attraction of Abyss, its complexity and seemingly different flavors upon every sip. This is very straight forward and not a multi-faceted beauty I came to appreciate and adore as much as I do the regular.

Good, not great....mildly disappointing. Fuck it, I was disappointed.

Pours black with a finger of khaki foam. Head retention is fair with a few strands of caramel-colored lacing left behind. Aroma is dark, with roasted and toasted malts hitting first. Peat, oak, scotch, candied caramel, and molasses all add to the complexity of this beer. Flavor profile is peat, oak, and scotch. Caramel, and molasses sweeten up the back end of this beer, while deep, dark notes of roasted and toasted malts create a firm base. Mouth feel is slightly fizzy, but otherwise velvety and a thick consistency. Overall, a robust stout with hearty notes of scotch.

Served in a 12oz snifter from a 22oz bottle.

Pours a thick black, not quite to the level of used motor oil but certainly closing in. About a half finger of dark brown head that fades into a nicely laced top. Smells of chocolate, whisky, molasses, peat, and earth. Tastes of milk chocolate, smoke, peat, cherries, and red wine tannins. Fades to a smoky finish. Creamy texture. The scotch barrels add an interesting dimension to Abyss, providing a smoky, peaty experience that works quite nicely and I think really highlights the chocolate and charry flavors normally found in Abyss. Would happily pick up another bottle to age.

Pouring this beer dated 12/09/16 from a 22 oz. bottle into a snifter glass this beer pours out chocolate in color with highlights running throughout until formed in the glass. It formed a half pinky width of caramel colored crown that didn't want to stick around too long and chose rather to just form a ring around the glass. (4)
The smell is burnt bitter chocolate mixing with earthy wood, molasses and dark fruit all backed by a somewhat smokey background. (4)
The taste comes in with an earthy soil like presence before turning to that bitter, burnt chocolate. Wood, dark fruit & molasses all still present as well and the smoke finishes it off. (3.75)
The mouthfeel is, I would guess, past it's prime, because it is rather flat with no carbonation bounce. Other than that, it's slightly smoky, earthy and dry. (3.5)
Overall, this was my least favorite out of the variants I had of the Abyss, but that does have some to do with the carbonation levels of it. I always enjoy that bitter, burnt chocolate in the Abyss and liked how this one had a slightly smokey presence tangling with it. While I would definitely drink this again, it wouldn't be anything I would search out in the future. (3.75)