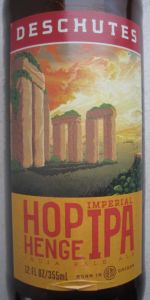 Notes: With an immense hop flavor and bitter finish, this monumental IPA is an enigma worth pondering (see what we did there?). Centennial, Chinook, Cascade, and Galaxy hops come together to create a hop sanctuary. Revere the almighty hop!

This is their new version of Hop Henge Imperial IPA, the hops have been modified as of 1/2009.

A: Clear copper body. Decent retention along the edge of the glass.

T: For a fresh bottle, the hop flavors are subdued. Very malty, with some hop bitterness toward the end. Not bad, but not quite what I want out of a big double IPA. Booze is well concealed.

O: Where are the hops?

Really good IPA. Great balance of hops and malt. Another winner from Deschutes Brewery. Very easy to drink but the high ABV can sneak up on you. Give it a try!

Just a great IPA. Good flavor. Lots of balance, not overpowering, and has a pretty high ABV. Lots of tropical fruits in the smell and in the taste. Easy to drink. Give it a try!!

Nice clear orange body with a frothy white head that leaves sheets of white lace, lazy bubbles floating all around. The nose gives a strong scent of citrus; tangerine, orange, mango, lemon. There's a faint backbone of sweet toasted caramel malt and spicy pine that integrates nicely with the fruits. Marvelous. The flavor evens the field between all of these flavors, balancing them all into an intense, bitter, resinous, fruity, off-dry composition. The feel is fluid, medium body with assertive carbonation whose zip adds to the intensity of the bitterness.
This fantastic shelf beer is why tasty IPA's get 3.5's; the craft beer game has stepped up in a big way. Five years ago I would have been happy to buy this as a bomber for $8.99, nowadays I'm happy with it as part of a mix-a-six. It offered most everything a hop head could want; fruit in spades, pine, bitterness, balance, spice. it only lacked dankness and earthiness, but let's focus on the positive. This is a henge I'm happy to hedge my hops on.

Eyes
Poured a dark gold body with a slight orange glow. Fluffy head formed, a little over an inch deep, collapsed, and left a tremendous amount of foamy lacing throughout.

Nose
Sweet notes of tropical fruit were prominent. Notes of grapefruit and lemon peel definitely suggested this brew had bitter tendencies. Herbal and spiced hops mingled with sweet toasted malts. I definitely picked up a whiff or two of alcohol as well.

Mouth
Sweet and juicy hops hit the tongue first. Sweet notes of orange and pineapple took a tart turn, letting bitter notes of grapefruit and lemon break through. Earthier hops settled in the lower levels near the malts. Subtle notes of pine were followed by a very minor presence of toasted grains. Definitely a dry finish with a decent hit of alcohol. Medium bodied, leaning toward the full side of the spectrum. Moderate/low carbonation.

Notes
As far as DIPAs go, this one is certainly not "in your face" as far as hop intensity is concerned. Great focus on the middle tones of the hops, rather than the often overly-bitter takes on this style. My biggest beef with this brew would be the ABV... 9.3% and I definitely tasted it. Regardless, I am looking forward to next year's version!

It feels weird to me to rate an experimental beer that changes, as far as I know, every year. But this is one very drinkable DIPA. Almost creamy without being cloying. Perfect amount of bitterness. Not too fruity or citrusy. Really damn good IPA. Sure it could be prettier but who cares. Glad I snuck this into the grocery cart today.

22oz. brown bomber with a bottling code: 021 09 0841 E. It pours an orange coppery color with good clarity and visually mild carbonation. A nearly two-finger off-white, beige sticky head sits on top and clings to the glass as you drink.

Sweet citrusy nose with some caramel, grapefruit and pine leading the way. Not as hoppy in the nose as I was expecting, but plenty hoppy just the same.

Nice floral fruitiness to start, like honey and orange blossom, then comes the hoppiness of grapefruit and refreshing pine, followed by a bitter hop finish. Very nice hop riddled flavor. It's got some big body thats produces some more sticky head with a few swirls and brings more floral notes to the nose. Good full mouthfeel with the alcohol hiding deep within, along with the subtle (not too subtle) carbonation, giving this brew fine drinkability qualities.

Very nice job on the hops in this one, a pleasure to drink and then some.

Bond series out of 22oz. bomber. Pours a dark amber with a head the size of the liquid. Excellent aromas and flavor profile. Malt backbone props this up, and some nice bitterness on the finish. I didn't know what to expect on this one but was pleasantly surprised. Similar to Smutty Big A. Much better than some of the west coast hyped up IPAs as well.

Had another one 3/31/09. Yeah, this is a middle of the road DIPA, fairly two-dimensional bitter citrus flavor, not as much complexity as some others I've had since the first tasting. I like most of what Deschutes puts out, but I am downgrading this one a tad.
---
Pours a deep orange copper color, with a bit of a white head that leaves a small amount of lacing. Smells of citrus, and tastes of grapefruit and orange with a mild bitter aspirin aftertaste. There's a lot of citrus tingle on the palette. Not the most intense DIPA I've had; in fact, it's on the mild side for a DIPA. More like a good solid IPA. At any rate, while it's not the most powerful DIPA I've had, it's a solid entry from Deschutes and very drinkable. Too bad they don't make this one all year, as Inversion is not that big of a deal.

Pours dark amber with a two finger off white head which has nice retention. It settles down to one finger, and holds nicely for quite a while. The aroma is grapefruit, orange, and caramel malt.

The taste is a little bit lighter than I expected, but still good. Grapefruit, orange, and caramel malt are all present.I I can also pick up a very light amount of pineapple, but it is not as strong as it is in beers like Abrasive Ale and Dreadnaught.