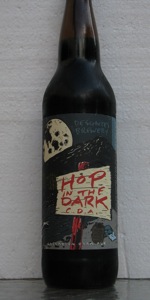 Poured from a bomber into a Deschutes Tulip at 45 degrees. Appears black, with dark brown around the edges, and topped off by a light tan head, 3 finger width head. Good retention and nice spiderweb lacing remains on the glass.

Smells of citrusy hops, lemon and orange mostly, with some grapefruit too. Behind the zesty hops there is a decent cocoa powder aroma along with some faint roast.

First thing I taste is toasted cocoa puff cereal, but it doesn't remain for long as the hops takeover pretty quick. The hop flavor is a pretty typical deschutes style, and reminds me a bit of Red Chair's hop profile. Lots of C hops here, but not overly fruity or juicy in nature. Finishes up with a good deal of roast, pretty tasty.

I like the mouthfeel a lot on this beer, it's somewhat thin compared to others I've had in the style but I think it works. I'm also a big fan of the texture of the head all the way through. Good level of carbonation.

Overall a very solid Black IPA, and another winner of a beer from Deschutes, seemingly the company that can't make a disappointing beer. I think I prefer Sublimely Self-Righteous Ale, mostly because of the hop profile difference, but to each their own!

[Original rating 2012-09-21] Dark brown with a bit of red when held up to the light, almost black. Thin brown head that disappears quickly. Aroma is roasted malt, citrus, stone fruit. Taste is malty, sweet at first with a bitter finish. Some alcohol in the finish, a hint of cough syrup. Mouth feel is a bit thin.

Plenty bitter and impressive hop connotation. They may have used some dehusked black malt, as the bitterness while high, seems hop derived moreso than malt derived. Covers alcohol well. While not a style I'm huge on, when I think of the best in style, this one is up there. Most importantly, because the hops provide flavor, its not just an acrid bitter bomb with dark colors.

From tasting notes. Had on tap at the Bryant Lake Bowl. It pours clear black under a 1” tan foam collar. The dark malt aromas and flavors are clean, smooth coffee flavors – a light roast and not harsh or burnt and are softened by a light caramel sweetness and seasoned by a citrusy, resiny, grapefruit rind bitterness. It all works very well together.

One of my favorite Cascadian IPAs, and here the name is more than fitting. A light chocolate roast and some crisp grapefruit notes with a piney, slightly resiny note on the finish. Delicious.

Hop In The Dark Cascadian Dark Ale from Deschutes Brewery
Beer rating: 91 out of 100 with 1346 ratings