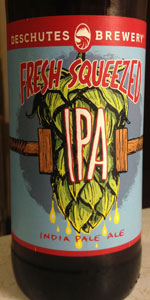 Notes: This mouthwateringly delicious IPA gets its flavor from a heavy helping of Citra and Mosaic hops. Don't worry, no fruit was harmed in the making of this beer.

Appearance: Pours a darker copper color. The head is two fingers high and eggshell in shade. Retention is moderately low, but plenty of lacing manages to stick to the glass. Despite the relative darkness, it's still an aesthetically pleasing brew. (4)

Smell: At first, I don't get much. But once it opens up, it's character really starts to pop. I really pick up a nice orange juice character to it, along with some berries, mango, and pineapple. Hell, I think I'm getting some nice ale esters, such as cherry or apricot. Even better, there are no nasty Mosaic off-notes (read: sweet onion). This nose rewards patience - it's not impressive at all initially, but opens up to become very impressive. (4)

Taste: I initially get a lot of orange character, both peel and flesh. What separates this from most IPAs is not only in its defined malt character, but a defined ester character. Notes of table sugar, cookie, and cherry really help this stand out among the IPA cavalcade. Even better, it conceals the less desirable Mosaic characteristics almost completely. The end result is an IPA that's downright deep. (4.25)

Mouthfeel: It has a lot of malt sweetness lingering throughout, along with a very long finish. While it doesn't feature elite drinkability, that's mainly due to how much is going on with this brew's flavor profile. Still, a decent crispness is featured, and the carbonation helps it go down somewhat easily. (3.75)

Overall: This is a lot more complex than the standard IPA - not even my disdain of Mosaic hops can detract from this. It's one of the few IPAs I want to genuinely savor instead of get down as quickly as possible. I'll definitely be on the lookout for this one again. (4)

Delicious and lots of hops. Pours with huge head (4 fingers) that leaves tons of lacing. Lots of hops aroma and flavor finishing into mango. Silky and almost creamy mouthfeel. Just a bit lacking on bitterness to throw off the balance. Very very good overall though.

I have tried this beer on tap at deschutes brewery in Portland it’s was what your would expect from a world class IPA amazing brown amber color with crisp floral flavors of multiple hops loved it! Cheers!

Red skewed amber with a crackly, generous papyrus colored head and even some nice lace.

The peach rings and gummy candy come out strong. There’s a malt backbone with an English character, which is something I haven’t tasted in a hot minute. The bitterness is smooth, medium, and finishes cleanly.

A medium-light body and creamy carbonation combine for a really put together beer.

I thought I’d had this before and that it wasn’t memorable, but now I’m not so sure. This is a really nice combination of new hops and throwback to English pale ales and early American craft.

Bitter, resin leaning IPA resembling the classic, resilient taste of the style. Not overly hop forward. Based on the name, I expected a lot more citrus and was pleasantly surprised by the outcome.

A great choice for someone who is not a huge modern- IPA drinker.

Honestly it tastes nothing more than average. I give it a 6.1 out of 10 my way. I'd enjoy the fresh Haze better and feel this beer is overrated at a 95. That's forgiving.

L: Pours a crystal clear amber with a beautiful off white head.
S: Smell isn’t as hoppy as expected and a little disappointing.
T: Malt forward and slightly bitter. Citrus and pine.
F: Mouthfeel is resiny and sticky
O: I was really excited to try this and am surprised by the world class rating. It is good, but world class? For the price, it’s solid though.

Great resin on the lips.

A solid IPA brewed with Citra and Mosaic hops. It's not as citrusy as the name implies, but definitely full of flavorful, malty goodness with a smooth easy bitter to finish it off.

Wow…this IPA had such a great rating that it lead me to purchase 12 cans as soon as I saw it at my local store. I was so excited to crack one open, pour it in a tall glass, and let it blow my mind.
Was I in for a surprise when I got my first sip….this stuff is terrible. Maybe my expectation was, and still is, way too high. I even checked the expiration date on the can…it’s not even close close to the expiration date. I dumped out the first one, grabbed a fresh glass, and tried it again. Ughh, this is just nowhere near a “world-class” rating. Now I have to leave the other 10 cans at a friends house. Naw, I would dish this stuff on freind with taste for good IPA’s. I’ll have to find someone to give it to who likes swill.

This a well balanced IPA. The hops are in complete harmony, and the mango and orange flavors are combined with light caramel.

One of the best IPAs you can buy. Citrusy and resinous with a lovely malt backbone. Perfection.