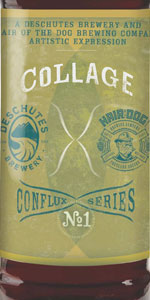 Notes: Deschutes Brewery and Hair of The Dog Brewing Company join forces to weave The Dissident and The Stoic and Fred and Adam into an artistic collage of cask-aging alchemy.

One of the most complex and interesting beers that I have ever tasted. It is a fantastic layer upon layer of incredible richness of aroma and flavor. A truly wonderful beer that one should seek out and enjoy!

12 oz. bottle dated "Best After" 4/30/13. Poured into a tulip with a dark brown color and mahogony highlights. Small foamy beige head with moderate retention that settles into a thin crown and moderate lacing.

Wow, this beer has a lot going on. A blend of four big beers isn't enough, so Deschutes just had to stick it in multiple barrels. Currently it's drinking very well, with all the barrel and beer flavors blending very smoothly. Sweet, dry, and tart flavors all combine to give it a phenomenal balance for such a complex and big beer. Sherry, bourbon, rye, and pinot noir barrels are all noticeable but none overpowering. This was definitely a treat.

Aroma was huge and complex, there was raisin, plum, strawberry, cherry, grapes, wine, whiskey, booze, a sour vinegar element and oak. The color was interesting as well, it poured a hazy deep amber, almost brown, color with very little head, typically indicative of a sour. Lo and behold it was quite tart on the palate, I know there was a sour beer involved and wine barrel aging, and I really liked that. Also got raisin, plum, blackberry, pomegranate, wine, cherries, whiskey/bourbon and wood. There's was a nice sweetness running through it in addition to the sourness, and some earthiness. It was full bodied, but also crisp and tart. All in all I thought this was an incredible beer with a lot of depth and complexity. Glad I was able to try it and can't wait to see what other craziness comes out of this conflux series in the future. Cheers!

This was one of the most deeply layered and complex beers I've ever tasted. Masterfully blended and better than the sum of its parts. All four beers that went into this were present and distinguishable. Huge wine barrel and rye whiskey aromas combine with caramel, vanilla, and tobacco yet still manages to finish tannic and dry. The inclusion of the dissident in the blend really rounded everything out and counters all of the big, sweet flavors with a tanic, tart, and dry finish. Thick, heavy, and relatively low carbonation. This has so much going on yet blends so seamlessly together. Very impressed.

The coup de grace of our Conflux No. 1 tasting, we enjoyed this out of a 12 oz brown bottle with a "best after" date of 4/30/13. Even though I've had this beer before, it will be interesting to see if I can pick out the various components from the blended beers--Fred, Adam, Stoic, Dissident. Poured into an old fashioned glass.

Appearance (4.25) - I really expected this one to look a bit muddled with the various styles being included, but it pours a gorgeous chestnut hue of brown with some reddish tints and a tiny bit of haze, but less haze than I expected. Atop the body sits a finger of ecru foam that shows moderate retention before fizzling away to a ringlet and spots of film on the surface. Lacing is subdued and faint.

Smell (4.25) - Here is where I start to recognize the various notes of the beers I just drank. There are notes of both light and dark fruits, also a hint of pomegranate tartness that pairs up well with the balsamic acidity to balance the richer notes of leather and dried tobacco that peek through from the Adam. I really didn't expect to be able to detect components of each beer so distinctly, but here we are. So far this is a massive success.

Taste (4.5) - Much like the smell, the component beers are each well-represented, with none really overpowering the others. Here, the fruitiness becomes a little more distinct, with notes of golden raisin and dried fig, as well as some black plum. I don't get the pomegranate as much at this phase, but there is a semi-sweet tartness on the finish that provides just a touch of bite. Any more and it would ruin the more savory and sweet elements of the taste, but as it is, it's just a point of subtle interest. There are earthy undertones and wet bark going on here as well, and just hints of bitterness that somehow help to balance out all the disparate components.

Mouthfeel (4.0) - Medium-bodied and moderate carbonation, with a slightly creamy feel and just a pinch of puckering on the tongue.

Overall (4.25), this is one of the oddest and most interesting (in a good way) beers I've ever had. While it's far from the first blended beer I've sampled, I think it may be the first where the beers used were so stylistically stratified. A golden strong ale, an old ale, a quad and an oud bruin aren't a combination that I would have imagined myself. Then throwing it into seven different barrels... crazy. In some ways, it's amazing that it turned out as well as it did--with so many elements, there were many places along the way where something could have gone very wrong. Cheers to HOTD and Deschutes for showing ambition and kudos to them for it paying off. I will certainly buy this beer anytime I run across it sitting on a shelf, even if it's $10 for 12 oz.

Hmm, interesting beer. A few too many competing flavors (in a bad way) for me to enjoy this. Starts out like an oud bruin, and then Adam's leathery, chocolatey flavors take over. The finish is an unpleasant acetic, slightly coppery tang. Interesting and complex, but the flavors just don't meld.

Edit - After having it for a second time at a tasting, it did seem a bit more harmonious, so I increased my rating. Still prefer the individual components to the blend.

A: Pours a reddish copper brown with a really thin wispy brown head that takes a little bit to fade.

S: The nose is really interesting. It's quite the mix of sweet and sour. I get caramel, raisins, plums, cherries, raspberries, vinegar, and boozy heat. Damn.

T: It starts out with a quick hit of sweet caramel and raisin, but the tart and funky come on strong right after. Tart cherries dominate, along with some slight red raspberry. As it moves into the finish it get boozy and clean. There is a great bourbon quality to it, but it finishes with a crisp vodka type heat. Interesting.

M: Full bodied beer. It's sweet and tart and lingers on the palate for quite a bit. It's big and boozy too. This is a slow sipper, for sure.

O: Overall, it's hard to make up my mind on this beer. It's drinkable, and tasty, and funky, but I just don't know if I like it. It's all over the place with it's flavors, and the booze is incredibly evident. I'm glad to have tried this beer, but I don't if I ever need to drink this again. Actually, I bet this beer would do wonders with a few years on it.

Appearance: Pours a murky chestnut with a craggy cap that fritters away quickly leaving a few dots behind

Taste: On the tip of the tongue, the caramel, coconut, vanilla and Bourbon tones marry nicely; would that I could keep it on the tip with my sweet taste receptors as once the beer spreads over the rest of the tongue, the sour vinous character moves to the fore, battling with and vanquishing the sweeter tone; the finish is tart, but not in a good way

Mouthfeel: Full bodied with low to moderate carbonation but a puckery aspect

Overall: I have sometimes wondered what would happen if you took a taste out of the dump bucket at a gala tasting of barleywines, stouts and sours - well I don't have to wonder any more; this could be my biggest beer disappointment ever as I had high hopes after aging this in my cellar for a couple of years

Very interesting beer. Appearance is just ok with a smallish light tan head that soon settles to a ring and island with a bit of lace and a hazy dark amber color. Aroma is a very volatile mix of raisins, prunes, dates, figs, sherry, brandy, toffee, black pepper and a suggestion of peaches. Flavor's somewhat similar to nose, starts out a bit sweet and finishes in the back of the mouth with a long lasting tang. Excellent body. A beer to be shared and sipped. Well done, brewmasters!

O-A wonderful beer, hopefully some age will tone down The Dissident and let the other flavors come through a little more.

Thanks to LuBiere (RB) for sharing!

Poured a reddish-brown in color with a thin, fleating head. It has a big, boozy nose, toasted malt, caramel, fruity/cherry notes, Brett and barrel. On the palate, lots of sweet malt, cherry fruitiness but a bit musty, tart, some oak...very complex and having a hard time describing. A bit thick/oily for the mouthfeel, but not overly so. A really interesting beer that challanges ones palate.