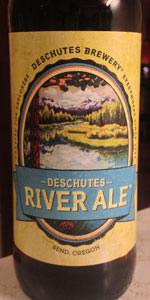 Reviewed from notes. The appearance was a light hazy golden orange colored body with a two finger white foamy head that rises a bit and falls to a half finger coating the top of the body (nice show), foamy clingy spider web lacing graces the sides of the glass. The smell was herbal, but spicy peppery citrus/lemon. The taste was basically the same, but adds a decent malt presence, smooth sweet sticky aftertaste and finish. The palate was light, sessionable. Carbonation is good for the style and decent to me, nothing lacking and nothing really standing out. Overall, many blonde ales on the market with more outstanding qualities. This one, well, not exactly sure, but maybe again.

All I can think when I drink this is how crisp it is. The flavors are mild and I get plenty of piney notes, but oh my god is it crisp. Seriously, try it and you'll see what I mean.

Appearance: It poured a clear golden copper colour with a one finger slightly off white head that dissipates quickly leaving only a little lacing.

Aroma: Bready and biscuit malt with a hint of caramel, fruity pineapple and apricot.

Overall: It’s easy to drink and nice and fruity. A decent beer but nothing spectacular.

12 oz. bottle poured into a willibecher.

A- Copper, semi-hazy. Cream colored head. Retains at 1/4" and little bits of lacing.

Tastes and smells like a Northwest beer. Probably a bit heavy for some taste buds, but if your a fan of beer from Washington and Oregon this will rank high with your favorite Ale's.

Bought a 6 pack from Don Quiojte $7.77. Amber color, light mouthfeel, smooth clean taste, no aftertaste, overall a great beer for when you want to drink a lot. Surprised that the alcohol is not higher give the amount of taste.

A little darker than straw yellow, a little less than one inch of head on her. Absent aroma.

Taste was nothing to write home about, good or bad. Little bits of malt and hops, agreeable to most palates. Unadventurous to ours. Nothing flawed with the beer. Your buddy will prolly like it.

Poured from 12oz bottle into a dimpled mug.

Appearance: medium orange hue with a dash of haze and a thin layer of frothy ivory foam. Pretty nice.

Taste: floral and a little bit fruity with a slightly toasty malt base. Quite good for a session ale.

Overall: this beer really is fantastic for such a low-ABV session ale. It's one of the most massively drinkable beers I've ever had.

Overall: This is a clean refreshing beer. It is fully graced with a hop aroma but has a lot of malt too. The combination makes a crisp sessionable beer. Very Good.

This was one of those palate cleansers that show up to the mega bottle share in March.

Pours a straw yellow, 7/8" head on it, pretty faint, a very neutral aroma, there isn't anything to really speak about, nothing off, nothing in your face.

Taste comes off minimal/neutral as well. Makes sense they call it River Ale, water is the most prevalent aspect of the beer. Softly hits the tongue. Carbonation high. No yeast esters. The beer has nothing wrong with it. It is a good beer to check out in between more flavorful beers or when you need to sober up, but not at as fast of a pace as if you were drinking str8 h20.

Sampled also last night on 9/5/15 while watching college football. Comes in a 12-ounce bottle and chilled down to 36 degrees F in my beer cooler and poured in to a "OMAHA-BUD LIGHT" pilsner glass.

Brew pours a medium-honey amber in color with close to a 2-finger creamy off-white head that stayed around for a bit, like a good German brew. The lacing was moderate and stuck to the sides of the glass, like a good German brew does as well. Very surprised by this one. Aroma is of malts with a hint of some fruit and yeast. More going on with the taste as there is some grass/hay with a hint of the citrus zest right near the finish. Goes down easy with no harsh or bitter aftertaste at all. Once again very surprised by this one as I have only liked a few brews of this style so far. Lighter-to medium bodied with good carbonation. Overall a very tasty brew.

I drank this beer from a standard pint glass. Looks are not too special. It has a golden color, is slightly hazy, and has a nice and firm white head.

The smell is not very strong, and dominated by fruity malts.

With just 4% ABV this is not a heavy beer. It drinks smoothly, is well carbonated and refreshing, but a bit too watery for my taste.

As the smell suggests, this beer is fruity. I tasted stone fruit, as well as citrusy hops. The aftertaste is pleasant.

Subtle, and easily drinkable, it makes a decent beer overall. With it being this fruity, I tried pairing it with a summer salad with nuts and strawberries, and this turned out to be a great idea.

pours a little dark for a blonde ale but great smell. good taste but nothing fantastic.

i would not have guessed this at only 4%. i would have guessed higher, i've had much more refreshing blonde ales but this is pretty solid.

Appearance – The beer pours a clear golden amber color with a big billowy white head. The head fades rather fast, leaving a light level of foamy lace on the sides of the glass.

Smell – The aroma of the brew is rather strong of a bready and yeasty smell mixed with a rather lighter citrus and apricot smell. Along with these aromas comes some lighter notes of a hay and grassy smell.

Taste – The taste begins with a slightly cracker like taste mixed with a bit of yeast. Right from the start there is also very light hay and grassy taste, which create a nice hop base for the taste for the brew. As the taste advances a lighter grapefruit and grassy hop as well as a little bit of a lemon taste come to the tongue. With a hint of pine at the very end, one is left with a somewhat drier cracker malt and lighter soured citrus taste to linger on the tongue.

Mouthfeel – The body of the beer is rather light and thin with a carbonation level that is on the higher side. For the lighter abv., the bit of sourness, and the drier tastes the feel is rather nice and makes for a more refreshing and crisp brew overall.

Overall- A rather easy drinking ale with a little bit of sourness and hop flavor, keeping it lively, but not overwhelming. Not a bad one to go to on a warm summer day as a nice session brew.

On tap, poured into a plastic cup at Deschutes Street Pub Chicago. The aroma is a muted caramel with a touch of citrus and a prevalent grassiness. By mid cup, the sweet citrus aroma strengthens. It pours a clear amber orange topped by a dense white foam that has a mild retention and lace, The taste is a nicely balanced medium light citrus and grain bittersweet. It's a watery thin texture with a fizzy carbonation and a light body. Flavors of bread and muted caramel are dominant with a citrus undertone. It finishes crisp with a citrus zest leaving an aftertaste of bread crust and caramel. It's lightly cloying and a bit sticky, but overall, a nice malt forward session ale

just picked this up at HyVee. it's delicious. not sure if there's a hint of mint or ginger or what's going on. or is it fruit or something I can't place? it is truly a beer with a great taste, thus compelling me to write my first beer review on any site. I even bookmarked this website a year ago and finally today I leave ths review.

Deschutes exudes quality for me, so I was surprised to find a rather off-putting nose on this one, a touch vegetal, not quite textbook DMS, but something off to be sure. Palate improved things a touch, with a sort of light bittering hop note working alongside some crackery malt. Body is thin, which makes sense for the low ABV take on the style, I suppose, but still wasn't really endearing. I don't know...the whole time I just kept thinking, "Why bother with this -- just spend the extra .5 - 1% ABV and have a Mirror Pond or Twilight Ale."

This is a style that is hard for me to get excited about, but this particular one is an excellent example.

It's dark yellow with a bit of fizz. The aroma is fresh yet slightly hops and yeast skunky and skanky. Just slightly, not blonde slut level. A complex odor.

The taste is characteristically mild yet interesting. It does bitter and malt all balanced together. Nice.

The aftertaste is mostly sweet, with less bitter. This is a well endowed blonde.

Pours deep golden with a lasting creamy head. Lacing sticks down the glass.

The taste is of slight honey - some cracker - subtle floral touch.

The taste is of a hint of honey with a hint of orange in the finish. Rather bland, even for the style, though there is enough flavor that it grew on me a bit as it progressed. Keeping style in mind I bumped up the score I was going to give it.

Easy to drink. Pretty much a run-of-the mill inoffensive blonde ale. It does have a nice, though short-lived, aftertaste.

Bought a few of these and went to the river with a some friends. It was a great session, everyone enjoyed the beer, with a modest 4.0% abv it was perfect for the setting. The taste is very mild, delicate almost in a floral kind of way. There wasn't anything too exciting going on with it it, just pleasant to drink without leaving much of an aftertaste.