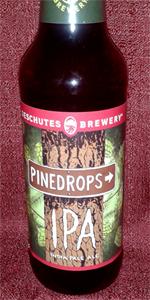 Notes: This lively IPA delivers a crisp and light malt body with ample citrus and pine notes from Chinook and Equinox hops. Inspired by the aromas and silence we experience when exploring the scenic pine forests just up the road from our brewhouse.

July 4th, 2016 - Pinedrops is potent and powerful, with a fruity and bitter aroma, but hard to pull out of the bottle. Like getting the last drops of syrup from inside, some persistence is rewarded. The flavor is even better, proffering a wonderful blend of sweet hops and spice, with a thick vegetal aftertaste that is botanical and powerful.

Pickle juice emerged as this warmed.

Not my flavor profile; hopefully this was my last.

Brillant gold with aromas of bready malt, floral citrus hops, balanced. Much follows in taste with a definite pine resionous medium body. Very session like ipa even at 6.5%. Pops more when fresh. NW IPA and a great example. My favorite from Deschutes.

A: Moderately hoppy with aromas of pine, light citrus and light resin.

A: Golden color, clear, with a moderate, uniform, white head, with light lacing in the glass.

Cloudy amber with 1-finger head which disappeared quickly, well carbonated Pine aroma dominates with citrus in the background. Taste amplifies the aroma—pine and hops in front and hop bitterness following in the finish.

It's appearance is an interesting (but somewhat sickly) yellow, but don't let that fool you. It smells of spruce and pine needles and tastes about the same, with very smooth and pleasant hops behind it. It is a pleasant beer that is easy to drink and always refreshing.

Poured into 24 oz glass mug from two 12 oz bottles. Average looking clear amber colour and average hoppy/slightly piney aroma. Taste is a step up from aroma, hops and a little earthiness with hints of maybe pineapple and mango. Goes down smooth with a slight aftertaste. Not a bad backyard BBQ beer. A little better than average. Prost!

Not my type of IPA. Very bitter and earthy. Disappointing in taste and strength for how hoppy it is, left a lot to be desired.

Dark gold in color, slightly cloudy with a nice foamy head. Inviting smells of citrus and pine, not overpowering on the nose. Balanced taste with pine, old road and pomegranate flavors. Malty finish coats the palate. Nice beer, definitely more on the earthy flavors vs. fruit and floral.

Aroma- no pine which is a disappointment. pineapple, mango, and tangerine in that order. has a slight cat piss and cleaner smell. too much going on.

Flavor- I get a slight pine but mostly that pineapple and mango taste with a little bit of melon. has a slight bubblegum maybe coming from the yeast. weird. interesting. bitterness is there but tame. abv is hidden.

Drinkability- gonna drink this but don't think i'm going to purchase this anytime soon or in the near future.

Overall- this is hoppy i'll give it that. just expected more pine. almost sad how not pine this is. I feel like i'd get more pine in a centennial or two hearted. feels like a ton of "new school" hops thrown in on this brew. kinda reminds me of new Belgium's voodoo ranger imperial ipa but i'd rather have that wayyy more.

Poured from a bottle into a Dogfish Head tulip

S: Pine and spruce... evergreen mostly with a bit of orange peel

O: A really nice IPA. Easy drinking... an everyday beer with lots of flavor. What I'd expect from Deschutes.

A mighty fine IPA. Pineapple and pines. Really goes down well and great with Mexican food. Deschutes makes some nice stuff and this is a solid IPA. Great on a summers day!

The appearance was a super clear yellow color with a less than half finger white foamy head (bar pour, no worries). There was more than enough carbonation seen rising into the quickly dissipating head. The smell, well, there seemed to be that German malty sweetness trying to overpower some of the bitter citrus sweet hops. The taste is basically semi-sweet but lets a decent amount of bitter hoppiness come through to balance out for the most part. Honestly, I really didn’t get too much of an aftertaste, but there is a decent quick semi-sweet malty finish. On the palate, this one sits fairly light. I found myself not necessarily sipping this one, but actually drinking (not gulping). I enjoyed it and found it pretty sessionable. Overall, pretty nice clean smooth drinking AIPA, West coast styled to an extent in some sort of new modern sort of way.

Appearance: Gold/amber wheaty color, very hazy, finger and a half head, sudsy lacing that hangs on the glass.

Nose: pine cones, lemon, other citrus, a hint of sage and call me crazy but I smell apple

Taste: similar to the nose, lots of citrus, a little dry like an IPA should be, but doesn't leave you with cottonmouth. True to the name, very crisp and piney. I picture being surrounded by evergreens when sipping. Not much flavor wise in the finish. Not a bad thing, but I do like a little surprise flavoring in the finish of a good brew.

Mouthfeel: bright, not too much carbonation, acidity leaves a tingle on the tongue's edges.

Overall: love this beer. Drank it several times before reviewing. Crisp, light in flavor while still being complex enough to keep you from being bored. My only knock, which might be a preference to some is that the finish is extremely short. Hence the crispness I suppose. Great spring/summer beer (unsure if seasonal by Deschutes).

Once again, the Bottle Backlog here at Chez Woody & its attendant eradication brings the opportunity for a brewery horizontal. In this case, I have a load of Deschutes beers, all of which are marked as "Bottle Conditioned", which makes it even cooler.

From the bottle: "Family & Employee Owned Since 1988"; "Profile - Hints of pine and spruce. Clean malt and a crisp finish."; "Bottle Conditioned for Quality [-] Live yeast added to the bottle allows this beer to age gracefully and stay fresher, longer. Keep bottles upright, and away from light & heat."; "IBUs [:] 70".

I Pop!ped the cap & began a gentle pour into the awaiting glass. I then followed-up with an in-glass swirl that raised two-plus fingers of foamy, rocky, eggshell-white head with decent retention that left sticky lacing in its wake. Color was Golden-Amber (SRM = > 5, < 7) with NE-quality clarity, prompting a visit from The Gelt Gang of Mammon, Midas & Croesus, all clamoring for a taste. Nose smelled like the pine tar on George Brett's baseball bat! Pine drops? Mic drops. Pine resinates. Ha! Chinookie, and how! Mouthfeel was medium. The taste was immense with pine, underlain by light grapefruit citrus with a crisp, dry malt backbone. Man, this was unsparing in its pine hoppiness! A a self-avowed, self-described hophead, I drink a LOT of AIPAs, but more often than not, they are more citrusy than pine. Not in this case! This will blow your doors off with pine. Finish was dry, but resinous & sticky. Man, I could drink this more often.

Bottle poured into a pilsener glass

Nice and crisp. Hoppy bitter finish with distinctive pine flavor. Even aroma has pine in it. I loved it. Really different and went well with Korean food!

From a bottle marked best by 6/22/17. Slightly cloudy orange color with a half finger of head. Smells of pine, resin, and malt. Soft feel without much carbonation. Piney hop flavors, more malt balance than some IPAs. The pine flavor is quite strong. I don't know if I'd want more than one in a single sitting, but kudos for producing something that is exactly as advertised!

Cloudy amber color with clean white head. Smells of lemons and pine. Taste is fairly similar. There's adequate malt balance and a good bitter seed finish. Ultimately, it's effective, but not as interesting as some of the other Deschutes IPAs.

On-tap served in a pint glass at Craft Silom, Bangkok.

Hazy golden orange color, it comes with very thick velvety white head that very well retains itself with very good retention before slowly sinking to an eternal foamy layer covering atop and leaving numerous of sticky lacing wave all around.

The aroma is very piney together with a touch of strong resin, also grapefruit, apricot, floral, and some spice. Malt is also there with its biscuit and caramel.

The taste is still led by piney hop. The other hop characters then closely follow and display with notes of grapefruit, apricot, lime, some spice, and strong resiny bitterness. Malt is undertone providing its biscuit and slight sweetness.

The body is medium with rather smooth mouthfeel. The carbonation is not that much maybe a bit less while finish is very dry. Juicy and piney led IPA, it is for sure to bring pleasure to the hop heads.

A: Pale gold in color with a light haze, and a large light tan head.

S: Light grapefruit aroma as well as a bit of pine resin. Some light bread notes as well.

M: Medium in body, moderate carbonation, but a nice soft feel to it.

Tons of piney flavor and delicious hops along with great maltiness. Definitely my favorite IPA by deschutes, far surpassing their inversion and slightly ahead of Fresh Squeezed.

12 oz bottle pours a lightly hazed gold color with a decent cap of white head. Fades at a pretty quick clip, but leaves some fine lacing behind.

Nose is citrus and pine needles, not quite sap resinous, but more like crushed up pine needles. Candy sweetness and maybe even some bubblegum.

Taste is a decent blend of pine bark and pine needles drizzled with agave syrup. To me, this isnt very appealing, but Im not a huge fan of piney hops. Id take a Red Chair over this anyday.

T/F: Nicely balanced flavor with citrus and pine. Fairly light and crisp for an IPA, with not a lot of overwhelming bitterness.

O: Very good IPA, but a little short of great. A good choice for a little drinking session, as it goes down fairly smooth and is not too heavy in either character or ABV.

Pinedrops IPA from Deschutes Brewery
Beer rating: 87 out of 100 with 1261 ratings