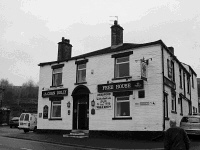 The Corn Dolly is a long-standing Bradford favorite, which has been in the CAMRA Good Beer Guide every year for as long as I can remember. Although it does feel like it is in a quiet part of Bradford, it is surprisingly not that far a walk from the Train/Bus Interchange and Bradfords second Railway Station at Forster Square.

A few steps at the front, leads you into what is essentially a single roomed Pub that has a dividing wall down the middle, which is to your right as you enter. This gives the impression of two distinct rooms, and helps to mask the sometimes more rowdy area on the right hand side where the Dart Board and Pool Table are located.

To the left, a well furnished room, with a mixture of upholstered seats against the wall, tables, stools and chairs as well as a Real Fire, which in the Winter Months makes this part of the Pub a popular area to stand and drink even when all the seats are taken. Decoration is a mixture of traditional English Brasses and a large collection of point of sale Handpump Pump-Clips from past Guest Beers, as well as Beer Mats, many from long-gone Breweries.

The beer range is good. It always has a House-Beer on sale, brewed by Moorhouses of Burnley. Regular beers include one from the Black Sheep Brewery of Masham, Everards Tiger (not often seen in West Yorkshire) as well as the imperious Timothy Taylor Landlord, which is always on form and a firm favorite of mine in here. As well as the staple regulars, it always purveys a fine selection of Guest Beers from Handpump as well. Typically these are a mixture of popular Guest Beers from past visits, as well as beers from newer craft breweries, which adds to the portfolio of beers. Snacks only. In the summer, it is possible to sit outside in a small area within the Car Park that has recently been up tidied and can be popular on hot Saturday afternoons.

It recently changed licensees, but the good news is that it was from Father to Son, a rare event nationwide, but highly appreciated by the locals here.

A winner of Bradford CAMRAs Pub of the Year Award a stunning four times, it was, is and I hope will be, a staple visit when in this part of West Yorkshire. A long-standing stalwart of many Saturday Pub-Crawls in Bradford, when I lived in England at least, and highly recommended. The Goldsborough, which is just next door, is worth a look as well.

Corn Dolly in Bradford, GB2, United Kingdom
Place rating: 3.86 out of 5 with 1 ratings