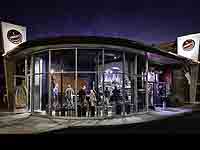 This is a gem of a beer store. While the quarters are small (which limits the amount of inventory), Michael Brawley makes the place hum through his knowledge and enthusiasm. There is plenty to choose from as Brawley has chosen to limit the amount of macro brews so that he can carry a full range of micros and import. There is nobody in the south Charlotte market that compares in terms of his product knowledge so if you tell him the styles of beer you are seeking, he will point you in the right direction and may take you on some riffs that we lead you to new discoveries.

For those of you who don't know the story, Brawley's family was previously in the business and sold the beer store located next door (Mike's) some years ago. More recently, Michael decided to re-launch the business, so he is still in the business building mode and has developed a great reputation with the Charlotte beer cognoscenti. Let's hope that with the success of the latest Oktoberfest (over 4000 people attended) that more beer buyers in Charlotte will seek out the styles of beers in which Brawley's specializes.

I feel certain that if we (and the breweries and distributors) are supportive of his efforts, his success will enable him to increase what he is able to do for the beer community in south Charlotte. Imagine what he will be able to do once the cap is lifted.

After reading the reviews, I was excited to finally stop by. This place is MUCH smaller than I was anticipating and the selection was very good, but not what I was expecting (based on reviews). Maybe they keep all of the good bottles in the back. Tap selection was very good and staff were very nice. From what I've heard, this is the best place to buy kegs in the area as well. I'll definitely be back but was a bit disappointed in the selection.

There's nothing not to like about this place. They have an outstanding bottle selection and really great service. Everyone who works there is laid back and friendly. They have alot of regulars for a reason. They always have a top notch tap selection and alot of "whales" stashed in the back. It's a very comfortable atmosphere to drink a pint, shop or just hang out.

This is definitely the best bottle shop in Charlotte. Everyone that works there is super friendly and helpful and their selection is always top notch. The addition of the bar is icing on the cake.

I can always depend on Brawley's to have what I need!! Great selection of bottled stouts, which you can't always find around town. Since they have incorporated taps, it just makes this establishment even better!!

Been here twice on my visits down to Charlotte. Super friendly folks. Great little curated beer selection. Lot's of tasty local treats. Will always be a stop on my trips back.

I was in town visiting fam for Thanksgiving and after reading the BA review figured I'd stop in. I've never received such stellar service from a nicer group of guys. At first glance, it's a small store with a kitschy, local vibe - I questioned the stellar rating until I asked for some help. I explained I was in from Tampa, FL and had a few key beers I was looking for and not only did they help me taste my way through a great tap selection, they literally crawled over kegs and barrels and cases to pull out individual bottles buried in the cooler so I could get every drop of what I wanted to bring home.

I had the good fortune of swinging in the next morning while @marine1975 (Shane) was bartending and picked up a few pint glasses for my collection. In a town with plenty of great beer, Brawley's stands head and shoulders above anywhere in Charlotte and the surrounding area. Don't waste your time anywhere else unless you've hit Brawley's first!

I've been here a couple of times while on business in Charlotte, first time there about a year ago a guy gave me the last 4 pack of Hop Drop N Roll when he learned I was from out of town. I also met Shane, who hooked me up with some nice beer they had in the back.

I went back there about a week ago and again the selection was great, got fresh hops again, this time all I could carry.

The atmosphere is relaxed and the selection seems quite nice, if I had more room in my suitcase I'd have loaded up on my last trip there. I didn't see Shane the second time and he is the "beer guru" of the store according to the other guy I met this last trip, who couldn't quite help out on the "must gets", but was still as helpful and courteous as possible.

I'll hit this spot up next time I'm in the area for sure.

Great experience. I stopped in here this weekend (Sunday) and picked up a few bottles. There's a decent amount of taps and a TV that was turned on to the Panther's game when we walked in.

Beyond that are the coolers with beer and a few dry storage racks with beer as well. A good selection and excellent for the space. They do have a small space in their walk-in with a few more beers.

The negatives: Selection isn't as big as I've seen in the same amount of space but with the dual bar/bottle shop thing, it's understandable.
Secondly, A couple of the bottles my buddy picked up ended up being a couple of bucks more expensive than the Total Wine a block away. That being said, a few of the bottles were cheaper so I'm guessing on the whole, you end up better at Brawley's than elsewhere.

The positive: There was a woman working behind the counter who may have identified herself but I'm terrible with names, just suffice it to say I am assuming she's normally there. She said her son would have really liked to speak with my buddy and me since we were out of towners and she was sad he wasn't there. She gave exemplary service. Once she found that we weren't from Charlotte, she recommended a bunch of local beers they had (most of which we were on the lookout for based on info gleaned from here).

Awesome bottle shop. I was visiting from NY and Sean was extremely pleasant in helping me find some local gems to bring home. He took over 20 minutes walking me through the store, giving me recommendations. If I were a local, this would be the only place I purchased beer and if you visit, it is a mandatory stop.

Good beer, good people and now serving exclusive draught selections. Do yourself a favor if you are in the area and pop in.

Really feel the need to share the wonderful experience I had in Brawley's. Stopped in after flying into Charlotte on the way home to Columbia, SC. There were about 20 beers on tap, and the bartender (sorry I can't remember the name) was very helpful. After my wife asked about a different stout he pointed out Xocoveza, gave a wonderfully accurate description of the beer, and let her try a sample. I had a La Folie, which I'm always happy to drink.

Selection was really top notch for the size of the store. I could tell that Micheal has thought out what beers to carry to get the most out of his space. Got some Nugget Nectar and Sweet Baby Jesus, as well as several other local goodies. Micheal took the time to talk to me about the North Coast Old Stock Otsuchi, and he also answered several other questions even though the store was pretty busy.

After I checked out he asked me what type of glass I like to drink out of and hooked me up w/ a sweet Teku. This really was the cherry on top of a great experience.

I will definitely be back here whenever I'm in the area. It's really nice to be treated like a valued customer and talk beer w/ some knowledgeable guys. I recommend this store to anyone who happens to be in Charlotte.

Best selection in town and they added beers on tap last fall. A+ service always.