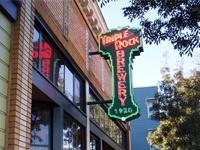 I can't believe I've never reviewed this place. Down the street from Jupiter. Shattuck to whatever this is on. So you're downtown Berkeley, one of the cooler concrete jungles IMHO, and that's coming from a staunch conservative.

Tons of wood when you walk in, good size wood bar, big mirror, excellent taps, excellent house brews. Usuals, some seasonals, a few exceptional rarities. Small area upstairs, I like that they don't let people smoke up there even though its 'outdoors'. Cramped areas and smoking are eh, not the coolest thing in public. But I don't even know if the general public is allowed up there, because come to think of it, the only time I've been up there was during Sour Sunday, so who knows. Its cool, so it'd be ashame if they don't utilize it. But anyways, back to inside, its roomy, some old breweriana around the place.

The food smelled good, but I can't recall what I've had there, so there ya go. Is this place affiliated with Jupiter? It seems to be, both cool places, I recommend checking out both since they're right by each other, and in a nice part of downtown Berkeley as well.

This is a Berkeley institution, and one of the first and longest-lasting brewpubs. Standard fare, beers are all solid if not standouts, and the food selection is decent enough for meat-eaters and vegetarians.

I visited Triple Rock in Berkeley yesterday and I like the place. It reminded me very much of the Big Time brewpub in Seattle -- then I learned that the two places are affiliated! Upon my visit, they had 13 house beers as well as 9 guest taps available. The beers I tried were really quite good; I'd definitely recommend checking out Triple Rock if you're in town. Service was decent enough; I also had lunch which was quite good.

Cool bar with an old timey feel. Never got food there but i always leave with a growler. They fill any growler