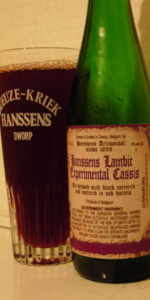 Appearance: Popping the cork was anti-climatic - there was no noise at all, and yet the cork was firmly in place and took some effort to remove. The beer had no head, seems mostly flat other than a little bit of bubbles noted on the sides of the glass and at the top. Clear/bright red-purple color.

Taste: Quite tart. There is some black currant in here, but it's more vinegary and sour than anything else. Very overbalanced.

Overall / Drinkability: Either something is very very wrong with this bottle, or this beer is not at all what I was going to expect. I've had a Cassis lambic before, and it was a delight - sour/tart, but not overwhelming. This is just too much tart and not enough flavor for balance. I feel like I'm drinking flavored vinegar. Quite the disappointment and I could not finish it. Nice color and smell, and that's about all I can say about it.

The, difficult to remove, cork came out without any poof or pop. An easy pour (to avoid sediment) resulted in a deep purple ruby with no head.
Immediately hit with the aroma of black currant jam and hay
currants, almost ripe blackberries, green grapes, hay, straw, barnyard funkiness with a little apple cider
No carbonation, a "thick" feel on the tongue with a dry leathery oak mildly tart finish
This is very good. The black currant (cassis) is front with moderate tartness and natural funkiness filling it all out. An excellent fruit lambic.

Notes via stream of consciousness: The cork came out with some difficulty, but also without any "pop". The first pour was then completely clear but lacking any head. It's ruby in color. I can see it has some carbonation to it though as there are some very fine bubbles, but only a few. The aroma is funky with brett and lactic acid. It's got the usual "barnyard" as well as leather and must, and a bit of fruit to it. I know that it's cassis but I wouldn't know that from smelling it. On to the flavor... it's sour but somewhat rounded. It's certainly got some sharpness to it but it's not nearly as cutting as some. The funk remains heavy and I appreciate that - sour and funky is what I want from a lambic, and the fruit here adds a third dimension that's great. I'm still not particularly getting cassis, but at the same time I'm certainly not getting any other specific fruit as well. If I didn't know that there was cassis here I'd probably suspect blackberry or elderberry, or maybe a mix with some black raspberry thrown in. There's some oak to it, and a dusting of mineral character as well, and I guess I don't need to point out that it's got a dry and acidic finish. It's bone-dry and oaky with a touch of crushed granite-like mineral lingering. It's also a bit astringent, like chewing on a grape, but that's to be expected and not a fault. It's vinous, but really more like red grape juice that's been thinned with white vinegar and water. Ohhhhh, that sounds horrible! It's really not bad at all, and so much more. I could easily see sitting at a table and relaxing in an old brown café in Antwerp while slowly working my way through one of these - and maybe more! It's a sipper. Even a nipper! But I'm constantly drawn back to it, and its aroma and flavor do not let me down. In fact, the further I go, the further I become accustomed to its acidity, and the more it opens up to me. Now, there is the issue of the cassis and so let me address that. It's unique. Cherry and raspberry are common, but the cassis lends it something special. That mineralish note that I found is most likely from the skin of the cassis. There's a kind of bitterness to it that's different, and not from hops. That's the cassis. In the mouth it's acidic, and thus zesty, but also fairly light in body. Ah, this is interesting. Now that I've poured the last of it I notice that it must have been laid on its side before I bought it. One side of the bottle is black with sediment while the other remains green. There's still a lot of sediment at the bottom of the bottle though. The label suggests that it's from March of 2013 which would make it almost 7 years old now, which makes sense. I wonder how much that has changed it. In the end I find it really well done, and somewhat unique. It's everything I'm looking for in a fruited lambic with the geueze base showing itself clearly and the fruit not becoming sweet, or falling back too far in overall flavor. I'd suggest that this is well worth seeking out but I'm pretty sure that time has passed.
Review #6,869

It is good but I am not sure black currants are great in a Lambik. Different but not my favorite Lambic.

Taste: It is tart, some Brett funk, lots of black currants, some oak tannins and red wine flavor.

There seems to be a dividing line between judging lambics. You have your shitty category of lambics that add sugar that you often are more likely to see on shelves than an other. Then, you have those that don't. They're usually, universally almost, better. Well, here is one that doesn't add sugar, but is also kind of at the bottom of the ladder in terms of good unsweetened lambics. I blame the currant. Fuck that thing. Shitty dark cranberry.

Anyways, pours a mixture of brown and purple, more dark than a bright purple for sure. Small head, lacks retention, kind of a brown, cherry cola impression from it. Sour and tart cranberry burnt nose.

Taste, ugh, exceedingly dried out from the currant, the oak further seems like it is sapping your mouth of all water content. Puckering and drying like a sweet tart infused hair dryer. Currant always seems to amp up acidity. Does contribute some barnyard horsey stuff. Does that nice if you're looking for it. Its really the "fruit" that clashes with everything else here. There's some real good aspects of it, but ultimately this would be better without currants.

Looks like the Experimental Raspberry; no head. Similar paint thinner-like aroma, and at the same time metallic. Taste is not as acidic, and the black currants are extreme, but it's still hard to get past the aroma. At least I can finish this one though.

Edit: couldn't finish this one either.

Hazy red color with absolutely no head. Aroma has lots of dusty barrel and cellar notes with some fermented fruits in the back. Taste has medium sourness, quite acidic, fruity with slight pits and skin bitterness. Light body, no carbonation, quite dry. Overall it's really rustic with lots of cellar and damp wood notes.

375ml cork and caged bottle, bottled March 2015, served in a tumbler glass. Pours a dark ruby purple body, minimal head of any kind, zero retention, no lacing. Kind of weird for a fruited lambic of any kind. Smell is a cheesy funk, moderate acetic cidery acidity, black currant tartness, a bit of hay. Solid nose here. Flavour is similar, although it seems a bit more of a sweettarts sourness to me overall; a moderate-heavy acidity overlies the black currant fruit, musty hay, cheesy funk. It's not as complex or funky as the base Oude Geuze from the same blendery, not by a mile. Still, a tasty and acidic beverage. Mouthfeel is lighter bodied, seems a bit undercarbonated for a fruited lambic. Slightly watery, but plenty of acidity on the backend. An overall interesting take on a fruit lambic, but the carbonation is low and the acidity a bit too overwhelming.

My fiancée smelled this and, without knowing that barnyard is a somewhat common wild beer flavor note, she goes "this smells like a horse."

One of the ripest, horsey-est lambics I've ever tasted. Huge sour fruit from the currants and a ton of hardcore barnyard funk. I loved it but this is an extreme beer -- even for the category --that will put some off.