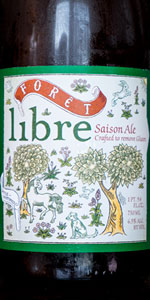 Reviewed by mike22ne from Massachusetts

My buddy with Celiac's says "wow that's actually pretty good!"
And another friend says "I wouldn't have known it was gluten-free if you hadn't told me".

This was back when "gluten-free" was a concern only for celiacs and those with other, legitimate medical issues, before idiot hippies invented the notion of "gluten sensitivity" and began their quest to ruin restaurant menus nationwide. It's perfectly normal and heathy to be repulsed by such people, and, consequentially, to mindlessly reject their material effects. Which is why I, like many of you, have not drank a gluten-free beer for some time.

And so I was surprised to see that Dupont put out a gluten-free product. It scrambled my prejudices. Roughly, my peanut-sized brain received a signal that said "DUPONT GOOD" and was then blindsided by "GLUTEN FREE BAD" and I was so upset I had go to my car, where I peed myself.

Not gonna lie: I have no memory of getting home. Found this in my fridge two later, and so I guess I have to review it.

Tastes very firm and floral up front, grassy and lemony in the middle, and very light and seltzery at the end. A tad thin and inconsistent, but still a solid saison. For a gluten-free product, it's a remarkable achievement.

Reviewed by Can_has_beer from Texas

Reviewed by goochpunch from Texas

Reviewed by trebbates from Texas

4.43/5  rDev +13.3%
look: 4.5 | smell: 4 | taste: 4.75 | feel: 4 | overall: 4.5
Wow. One of those beers that just does it for me. Pours a beautiful golden color with a fluffy white head that left small amounts of lacing. The floral, yeasty smell had me from the pop of the cork. I love a saison and the Belgians never disappoint. This will surely go down as one of the best. Great mouth feel with just the right amount of carbonation. This is a great beer and is worth trying.
Apr 05, 2015
Rated: 3.95 by impending from California