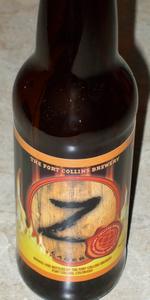 Deep amber in color. It has a nice malty taste, almost chocolatey, and has a mild, smoky finish. If I didn't know it used smoked malt, I probably wouldn't be able to tell from the taste alone. It's pretty subtle to me, but very nice.

Overall, it tasted really good. I would drink this again for sure.

I was talking with the manager of my local brew bar about Fort Collins beer. We're both big fans of Fort Collins brews and I was surprised when he said he had a FC beer he couldn't give away. "I put it on sale for a dollar and no one will drink it."

Z Lager looks very nice in a pint glass. It smells smokey, which is to be expected for this style. But then...there is the taste.

The best descriptions I have come from two other bar patrons:

Patron 1: "This tastes like they drained bacon fat from a dirty griddle into this glass."

Patron 2: "No, this tastes like I accidentally dropped my cigarette in the glass then picked it up and drank it."

I like a rich, smoky beer, but I don't like this one. Nope, it really is cigarette bacon beer.

Odd that this comes from Fort Collins which brews such great beers. Their Rocky Mountain IPA is one of my favorites and is an undiscovered gem.

A brillantly clear copper color lager with a tall white fluffy head thats has great rentention, although there is not much lacing.

A nice and sutle smokey malt aroma. Aroma is similar to what you might experence with smoked cheese.

Taste is smokey up front but mildly so.

A medium body beer with a bit of grittiness.
Smooth and clean with nary any aftertaste.

An excellent ell made beer, the smoked malts are not overpowering and really enhance the flavor of the beer.
A

A- penny copper with a small head that faded quickly, just a bit of lacing, translucent, not hazy.

S- just a hint of smoke with some malt sweetness coming through as well.

T- pine resin with just a hint of smoke, a little caramel in the taste

M- light bodied, lightly carbonated, not much to it.

D- drinkable yes, as there's nothing particularly aversive, but there are better smoked beers out there, won't be seeking this out again.

a - pours amber in color with a thin cap of tan head. after calming i get a thin film and a few thin legs of lacing here and there.

t - carmel malt with a bit of char and an odd, tangy sort of bitterness that lingers for quite a while. not entirely sure what's going on here.

o - pretty good beer, but there are much better examples of the style that are easy enough to come by. wouldn't turn it down if someone offered me one though.

Poured into a standard pint glass.

A: Pure, clear amber with a golden hue and a small, tan head.

D: For me, just a taster. This ain't something I'd buy a sixer of.

12 oz bottle at 42 degrees into a Sam Adams Perfect Pint.

A: It pours a mostly clear copper color with a finger of cream-colored head that slowly recedes but laces okay.

S: Lots of char, caramel, and a little toast.

T: It is essentially a blend of smoke and strong maltiness. If you want a complex Rauchbier, look elsewhere.

M: It has a medium-light body with relatively low carbonation.

O: This is a tasty smoke beer but it lacks complexity and does not stick out in any way.

Pours a clear dark copper orange with a 1 inch off-white head that settles to a thin film. Small dots and streaks of lace form on the glass on the drink down. Smell is of roasted malt and some smoke/campfire aromas. Taste is of roasted malt, smoke flavors, and a coffee grounds aftertaste. Mild bitterness on the palate after each sip. Good carbonation with a crisp and clean mouthfeel. Overall, this is a pretty good American take on a rauchbier style that is much more mild than any of the others I have tried so far.

Pours a clear copper color with a small light tan head. Smell is of caramel and dry. Can't pick up much smoke in the nose. Taste is upfront sweet and thick. Subtle smokey notes really compliment the taste. The smokey notes remind me of smoked pork or jerky, not over the top smokey like some other examples. The body is pretty hefty for a lager. Very nice and drinkable. A nice session drinker.

I picked up a bottle of Fort Collins Brewing's Z Lager last week for $1.89 at The Lager Mill. It's been a while since I've have a Raunchbier, and I have never seen or heard of this beer, so I thought I would give it a try, so lets see how it goes. No visible bottling date, but the store just got it in so I assume it's fairly fresh. Poured from a brown 12oz bottle into an imperial pint glass.

A- The label looks nice and it's pretty well done, it also sticks out a little. It poured a nice amber color that took some burnt orange color when held to the light with a finger and a half worth of off white head that died down to a thin ring that eventually faded to nothing and left hardly any lacing. This was a pretty average looking Amber Ale, the color was ok but the head and lacing were disappointing.

S- The aroma starts off with a lighter amount of medium smoke that impart a very woody aroma that resembles a campfire, after that comes the malts which have a higher amount of medium sweetness to them and impart some grainy, caramel, toffee, dark fruits, toasted malts and a light amount of coffee. Towards the end I get a light amount of citrus hops that add some nice complexity. The aroma is nice, but I feel like the smokey aromas don't blend that well with the dark fruit aromas.

T- The taste is a little similar to the aroma and it starts off with some medium sweet malts that impart some nice toasted, grainy, caramel malts, and slightly nutty flavors. Up next comes the Smoke which is on the lighter side but still noticeable and imparts a nice smokey and woody aroma. On the finish there is a light amount earthy hops that give this beer a lighter amount of bitterness, and a toasted malt and lightly smokey aftertaste. I liked the taste of this beer, it was nice and balanced, but the smoked didn't shine through as much as I would have liked.

Overall I thought this was a decent beer, not true to style enough to be called a Rauchbier, but for an Amber Ale I would say it was a little above average. This beer was pretty drinkable, it was really smooth, and the flavor did an ok job at holding my attention, I could drink two of these but I think that would be my limit. What I liked most about this beer was the flavor and aroma, they were the highlights of this beer and were both pretty balanced. What I liked least about this beer was the lightness of the smoke and the higher carbonation, I needed more smoke and less carbonation. I would be buy this beer again when looking for a lightly smokey beer, but I wouldn't buy it often, I recommend giving this beer a try, it might make for a good gateway Rauchbier. All in all this was a lightly smokey amber, what it lacked in intensity it made up for in drinkability. This was the second beer I have had from this brewery and it was better then their Chocolate stout, I thought it was a pretty solid beer and I wouldn't mind trying some more beers from this brewery.

Pours a pale amber with 1/4" of loose head that quickly fades. Smells of caramel malt, lager yeast, and faint wood fire. The taste is earthy with some obvious wood fire characteristics. There's a faint caramel flavor in the finish and just enough hops to add a balanced bitterness. Mouthfeel is light to medium bodied, crisp, and well carbonated.

This is very drinkable and would make a nice cold weather beer. Overall, though the flavor is mild and not very complex.

Sm: Smoke, light bacon, and plain barley. No trace of amber hops anywhere, but then me nose is broken... Aroma is mild in strength.

T: Poorly handled artificialish smoke and out of control bacon dominate, with tinges of hopeless amber hops and a bit of cream ever-so-slight (but not subtle) on the finish. Talk about ruthless imbalance. That said, the flavour isn't bad. The build is actually decent.

Mf: Smooth and wet. Does it complement the flavour? Not really.

Dr: Very drinkable for a rauchbier, but then it really isn't one. It's quite affordable in any case, and while it won't please hardcore fans of the style, it would make an excellent introduction to the style for newcomers before plunging them into Schenkerla. It's certainly worth a spin, and I admire the brewery's boldness in trying to capture an American mainstream market with this.