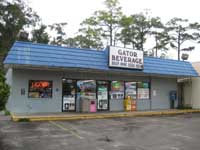 View: Place Reviews
Reviews: 33 | Ratings: 46 | Log in to view all ratings and sort
Reviews by scottyshades:

Although this place has a very good selection for a liquor store, the store itself is a dump...there are boxes and shelves in random places that force you to squeez through the isles and it is anything but clean. The biggest bone I have to pick with this place is that the people behind the counter are the rudest most impatient people I have ever come across. The last thing that they want to do IN THEIR OWN STORE is to help you in choosing a good beer. They rushed me out of the door and literally told me to hurry up when pulling out my wallet and cash.

If you want to find some good beers, go to Gator beverage, but do not expect to have a good experience...hopefully you will find yourself having a better experience than mine

This a liquor store right near UF. On a Friday night, this is full of people buying drinks for the night. Later on in the night its host to a range of characters. I once had a frat boy give me $5 for my beer, without me even asking! Its cramped and not that well light. but they do have a surprising large selection here. A good portion of their beer is stored cold. Not much else to say about it other than its the liquor near UF.

Best craft beer selection in Gainesville. Always has the freshest, latest crafts. A little small of a venue, but huge variety in beer.

Look like a convenience store from the outside but inside it has a wide variety of bottles. They usually showcase the new arrivals near the cash register.

Most of the staff is extremely friendly and helpful. They get all the limited releases in town, in bigger supply than most of the other stores. And they really take care of their regulars.

Largest selection of craft and European beers in town. They have wine and liquor too, but really a ton of quality beer. Staff will help me find what I'm looking for and even pull a bottle or two from the back for me. Also keep me informed when special deliveries are upcoming, i.e. 2015 W00tstout.

The best place to get beer in Gainesville. Regularly stocks new interesting beers. The service is great. They deal with college kids regularly it would be understandable if they seem not to care about you. The more you frequent the place the better the experience. The beer selection is top notch. They keep the store stocked with rare beers from not only America but the world; especially Japan and Belgium. Keep the sours coming.

Walked in here expecting Bud Light central, and got a nice little surprise. Snatched up some Infinium and La Trappe Oak Aged Quadrupel (Batch #3). They had a Utopias sitting on the liquor shelf but I wasn't going for it at $180 (or any price, really). Have had nice finds like Moat Water, they'll get some Cantillon here and there, nice selection of Belgian brews. Sometimes able to find some gems hiding in the back like Swamp Head Roosevelt and BA Human Blockhead. Lots of selection here for a Gainesville place. Will return soon!

A go-to for Craft Beer in Gainesville. The outside facade and frequent panhandlers aren't quite inviting, but don't let that deter you from venturing inside to check out the selection. Wall to wall beer (mostly due to the place being way too small). Great selection, but as a previous reviewer stated, check the dates on stuff that doesn't age well.

The staff can be hit or miss on service. One day you can get someone who is very interested in helping you and makes good suggestions, and on other days you can get someone who has no interest in you or your beer choices and experiences. I think I read a previous post that described the staff as "surly" which may apply sometimes, but is a bit of an unfair assessment. They deal with people from all walks of life, including college bros looking for a keg for their party, craft beer know it alls, and plain ol' drunks. Should probably cut them some slack if they're not overly friendly all the time.

Sketchy looking from outside, but inside it is a crazy beer lovers heaven. Shelves and shelves of beer from most of the breweries that get distributed to Florida. They get in most one-offs, limited releases, etc. The workers there can answer most questions and are a little surly, but I think they mean well.

Be aware of bottle dating here! I don't buy many IPAs or beers I'm concerned about freshness with because they tend to sit on the shelves here.

Selection-wise, this is on par with TIpples as the best place to go in Gainesville, and like any bottle shop just be aware what you're buying and you'll get some gems.

Ok Gator beverage. So the staff is usually very knowledgable and will locate beers for you. They wrote down my info and called me when a beer came in. There is one guy that looks like a burnt out druggie and I dont care for him, very removed and antisocial and hates his job. But as you can see from the pic its a corner convenient store that gets homeless people buying fifths. But the selection is great. they always get all the rare stuff in and I frequnt this shop quite often as they have some of the best prices in town.

I've been going to Gator Beverage for more than 5 years now. From the outside the building is pretty run-down and they get some shady customers coming in, especially late at night. The beer selection is very impressive though, and prices are in line with the best in Gainesville. They also have a good selection of refrigerated beer, including some refrigerated 750s and bombers which can be hard to find. Service can be hit-or-miss, a couple members of the staff are extremely knowledgeable with beer while others are apathetic. Still, it's one of the best places for craft beer in north Florida.

I first went to this place after hearing about the great selection. The selection itself was very impressive and surprising. When you look at it from the outside it looks like your typical college town convenience store with a bad beer selection. There is a large selection of almost anything you could ask for, from great American craft beer to high quality imports. They also have great weekly deals (ex:when i first went they had Sierra Nevada Glissade 6 packs for 5 bucks). On the other hand the inside of the building is low quality, the layout is small and unorganized. They are also not the most helpful. One time me and a buddy went down to pick up some beer for a party and the beer we picked up was skunk and tasted terrible. We called back that night and they completely unhelpful and didn't let us exchange our case. Overall i have a love hate relationship this place, great beer bad establishment.