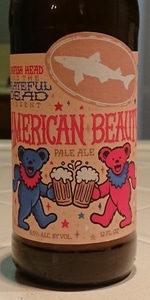 A nice medium amber draft with a nice head. Fruity and hoppy aroma with a hint of maple. Very smooth, rich, malty flavor with a hint of roasted hops. Nice finish that is smooth. Very different that your typical pale ale.

Dogfish Head is at it again with the music-themed beers, and this time it's a band that I've never really been into, not even a little. I remember one night at the Harriet Brewing taproom (RIP), a Dead cover band was playing, and some groovers asked me "do you like the Dead?" as I stood in an utterly un-grooving manner. Not really, I told them, and they looked at me as if a giant eggplant has suddenly bloomed on the top of my head. Yeah, well, how many Horace Silver albums do you have, you filthy hippies?


On with the beer:

In the mouth: Fruity, earthy, gritty hop presence on the palate. Smooth stuff, quenchable, refreshing. Medium body, long hoppy finish. Ends on a dry note, with flavor everlasting. It's a good pale ale, and you can drink it. There ain't nothing wrong with that.

I forgot that they added granola to the beer (of course), but it doesn't really stand out, but, rather, blends in with the malt very well. Adds a particular grainy, roast/toasty character, and the honey smooths it out.

But, speaking of the Grateful Dead, I once had a co-worker who teased me for playing so much jazz at work. I told her that I'm tired of everyone picking on jazz, because jazz never hurt anyone, and the only bad thing jazz ever did was inspire the Grateful Dead. Boy, she did not like that.

Pours a light copper amber color. Smell is citrus and orange rind with hornet and malt. Taste follows the nose with a malty grainy finish. Medium carbonation hoppy and malty with good bitterness.

Picked-up a six-pack of cans at Kappy's in Norwell for about thirteen dollars. Have had a few brews from these guys before. Not bad, not great, just ok.

Pale ale with granola and honey.

T: Good honey grains, nut cluster, granola, is clearly prominent. Some semi-dry grassy-pine hops, and dried citrus from the american hops. The honey is well played with a good role of sweetness and fullness as well a contribution smooth texture.

M: Nice fullness and texture from the honey gives this a slick and full feeling on the tongue. Good vibes of carbonation.

O: A fair pale ale, but by no means what I expected from this brewery. A bit tame at times and ordinary, unlike their go big or go home attitude. The honey played a good factor here with its sweetness and fullness but in the end you would never guess this from DFH in a blind tasting and has a diminishing return on excitement.

This one is alright. Pours a creamy head with clear dark amber color. Smells a little light and fairly hoppy. Tastes like a blend of malt and hops. But for some reason they don't taste balanced. Drinkable, but it's not really for hop lovers. Don't love it. Sorry DH.

Don't like Pale Ale's as much as my wife, but we both weren't impressed with this one. Too bitter on the end.

I enjoyed this beer. It had a nice head, Amberish color and a good hoppy floral scent. It is not complex. The taste a little one note .... but a good note and a good ale.