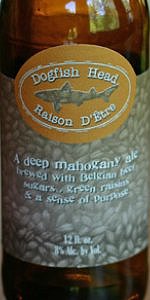 We began brewing this one at our pub in 1996 (we began packaging and selling it sometime in 1998) as the answer to the question, "What beer should I enjoy with a wood-grilled steak?" Raison D'Etre fits the bill. It's as tasty and complex as a fine red wine.

In the Quick Sip Clip video, Sam talks about Raison D'Etre inside the new cellars for our 600-bbl fermentation tanks. The cellars were designed specifically to allow sterile yeast management. The system also allows us to automatically dose the yeast into the fermentation tanks. At Dogfish, we use multiple strains of yeast for our different beers, so we are acutely aware of all that can go wrong when you don't love and protect the yeast.

Pours a slightly opaque orange-copper color with a 1 1/2", tight, cream colored head that drops slowly & evenly to a thick film and leaves good lacing..
Smell is malty, fruity (orange & raisin) & spice. A wonderful pleasure for the nose.
Taste is malty, fruity (apple/orange/raisin), hops (light & late), very complex, an extremely tasty brew.
Mouthfeel is very smooth, full bodied, warms the throat nicely without any harshness from the alcohol.
Drinkability is nearly as high as it can get. Often a beer with this much alcohol can be hard to drink more than one of, but this libation does not suffer that problem. I recommend this beer without any reservations.

A: one finger head for a few seconds after pour, going down to minimal surface layer. good dark brown color

D: could drink a few and would recommend to others

A slightly sweet malt aroma without any outstanding notes. A slight fruit taste floats over the malt background, leaving a hint of sweetness on the back of the tongue.

The body is a little thinner than expected, but enjoyable nonetheless. Average drinkability, you could drink a couple of these in a row, I'm just not sure you'd want to. This beer is sort of boring and uninteresting. I'm not sure what the brewers were aiming for with this beer and I'm not sure this is the proper style category either. I should rate this beer lower because it doesn't fit the style, but I did enjoy it, to a point, and will drink it again.

A BIG thanks go out to the wifey for surprising me with tickets to the game. Cheers, honey!

A: Like fresh apple cider. Dark sepia, with a 1.25 finger head. Some minor lacing, though considering it's a plastic cup I'm not complaining.

S: Hints of sun-dried prunes and figs. A bit of sweet alcohol and and a heavy dose of malt seep into the nostrils. Really different and quite enjoyable.

T: A bit of dark malt hits the tounge first. The mid is a mix of alcohol and raisiny, grapey dates. The finish is fairly dry, as the dark fruits and a pinch of Belgian candy sugar residue carry over and stick to the back of the throat.

M: I felt the carbonation could be toned down a bit, but I wasn't expecting the perfect beer at a ballpark. As I let it sit a while, it mellowed out and became much more inviting.

O: DFH's Raison D'etre is simply an off-the-wall kinda brew. I really love the complexity this one has. The way it balances the dark fruits and the flavor profiles of the Belgian Strong is really well done. Though it's not my favorite in the DFH stable, it's one I'll certainly return to. Thumbs up - well done Señor Calagione!

Poured a dark mahogany brown, almost opaque, with a small creamy head. Not much lacing here.

Rich aromas. Prune and yeast are the predominant ones. Some alcohol also.

A full-bodied brew that is sticky, but very smooth.

Be careful with food pairings. Goes good with stronger tastes like wings. But with lighter fair like steamed vegetables, it is unbearably sweet.

Pours a dark amber with a slight tan head.

Taste raisin up front backed by caramelized sugar notes. Body is a bit thin and it is woody and dry like a wine. Not a bad beer, but not great either - it is a little confusing to the palate.

Decent says it all.

The Appearance was great, the color and head were almost perfect.

The smell was good, it wasn't so good to start with but after it warned up a bit, the smell started to pick up on the spices and raisins in the brew.

The taste when right along with the smell. not great to start with, but improved as time went.

Mouthfeel was slightly oily and a little light for my taste.

Drinkability was decent but not anything to rush to the local beer pub to get.

Pours a deep mahogany with amber highlights and a two finger off white head. Lots of visible carbonation. Lots of raisin and Belgian candied fruit on the nose. A little bit of bready maltiness as well.

Head has now receded to a thick lace. Lots of bready malts up front finishes with a big sugared raisin sweetness. Pretty cloying actually. Alcohol is noticeable as well.

Medium to big in body, some caramel present somewhere in the middle of the beer. Creamy mouthfeel. A strange and dissapointing brew. Not as cloyingly sweet as others I've had though

Delicious dogfish head, as always quite a yum
A: Amber-brown with a nice off-white head. Great head retention and decent lacing
S: Roasted caramel, malts and hops. Very refreshing sniff
T: The caramel is there and the beer is well balanced
M: A bit filling, but it is quite delectably smooth. The 8% abv is masterfully masked.
O: I can see why the name for this is, in French, Reason for Being. I will be for this right 'er!

Burnished orange-bronze with a beautiful roseate blush. The pale caramel cap is remarkably tight-bubbled and soft with a blemish-free surface. I didn't see even a hint of deflation for the first several minutes. Unfortunately, it looks like the glass will be left untouched by lace.

Even with my nose in close proximity to the liquid, I'm having difficulty appreciating much. Vague impressions of dark malt, brown sugar and caramel are about it. The beer needs to seriously up the ante on the palate.

The flavor is as bold as the nose is shy. Raison D'Etre doesn't strike me as a BSDA; more like an old ale or even an English barleywine. There's a considerable amount of malt onboard. The flavor profile is made up of caramel-toffee, light molasses, cherries and raisins macerated in dark rum and, unfortunately, unmasked alcohol.

This bottle is at least one year old (bottled in October), but it could be as many as two years old. One would think that over that much time, the alcohol would have been tamed to some extent. It's still a little too raw for my tastes. There's also a metallic character that appears on the finish.

Warming and further inebriation don't bring anything new or interesting to the table. The flavor is still unintegrated, although not totally without merit. The mouthfeel is a bright spot. It's solidly medium and is as smooth as the day is long.

As noted on the label: I can taste the sweetness of the Belgian beet sugar, I can taste the green raisins (they taste like dark raisins to me) and I can taste the 'sense of purpose'. Dogfish Head does not lack vision or audacity, but they too often fail in the execution.

That's too harsh an assessment. Raison D'Etre isn't a failure by any means, but it doesn't hold together well enough to be anything more than a decent, quasi-drinkable curiosity. If the rumors of retirement for this beer are true, I certainly won't lose any sleep over it.

12 ounce green bottle, bottled on 6/5/2006. Served in my Dogfish Head snifter, the beer pours a mahogany/red color with an inch white head which went away very quickly. This is a sweet smelling beer. The first aroma that hit me was raisins, there's also some brown sugar, molasses and caramel. The taste is very malty and sweet, like raisins, figs, brown sugar, caramel, butterscotch and an herbal taste that reminds me of Jägermeister. Finishes with a bittersweet aftertaste. Mouthfeel is medium, with it being a bit syrupy with just the right amount of carbonation. Drinkability is good, the alcohol isn't too noticable but it does hit you after a while. Aging this beer for a year hasn't hurt it at all, it's pretty tasty! Another good brew from DFH.

A - Pours out dark reddish brown in color. Has a one finger off-white head with little retention.

S - Smells sweet and very boozy. Definitely picking up raisins along with bread and sour white wine. Kind of a funky smell.

T - Whoa this beer is hot. Even for 8% abv. Very alcoholic taste up front. Raisins are hidden by a medicinal flavor but still faintly there. Towards the end it sweetens up a bit with a syrup and candy sugar notes along with some sourness. Alcohol stays with this beer all the way to then end. In a bad way.

M - Mouth feel is medium bodied and with high carbonation .

O - This has to be the worst Belgian Strong Dark Ale I have had to date. Smells funky. Flavors are off and carbonation is too high. I wonder if I bought a bad bottle. Glad I just purchased the single bottle.

On tap @ Silvertone into pint glass...

Oooh, I like this more than the usual DFH suspects. The earth of the Ringwood strain is still there but the big raisins and mild oaky booze neutralize it nicely. Deep caramel/molasses/brown sugar sweetness with only a hint of booze burn. Well-done.

I'm digging the palate on this one. Nice heat that's blended well with malt and brown sugar sweetness. Hop grass is mild complement. Even finish.

A - Mahogany body with a very reactive carbonation. Short tight head that diminishes at a visible rate.

M - Medium bodied ale, with a fruit bread coating for the tongue. Goes down smooth.

D - Finally introduced myself to the Dogfish Head Brewery, with a new style. I'm not sure if I'd know what to pair this with for perfection, but I had a strong urge to eat freshly picked figs and pears afterwards.

Poured a bottle into a snifter.

A: Looks mahogany as stated on the bottle. Needs a vigorous pour to get some good head. Little carbonation. Clear & clean looking.

S: Very complex. Raisins, candy sugars, caramel & chocolate, grapes are all aromas that I get. This is a great smelling beer.

T: A raisny, chocolate-caramel taste mostly dominates. This is one to really sip & savor.

M: Starts sweet and finishes semi-dry. Nice little kick of bitterness at the end of each sip. Maybe a tad too syrup-like, but something I still enjoy.

D: The alcohol definitely shines through on this one. Sure- I've had plenty of higher alcohol beers before, but for some reason this one really seems to pack a wallop. Perhaps maybe it's because I consider this one a great tasting brew, where I'd like to have a lot of them but know in doing so would likely make for an ugly late-night into early morning.

Overall, this is easily one of my favorite Dogfish brews aside from 90-minute IPA. Not quite sure why others aren't as impressed. Sure, DFH beers are usually hit or miss, but this one is quite tasty.