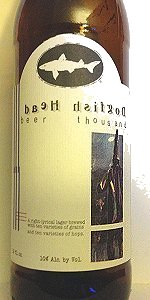 Poured from the bottle into a Dogfish Head Spiegelau IPA glass.

Frothy three finger head wit a soapy retention, thick bubbled collar and puck in the make up. The body color is a gorgeous crystal shimmering bronze, nearly red and with some nice plentiful but not excessive carbonation. This clarity is really stunning and with a good amount of darkness too. Real impressive looker.

What an interesting aroma. Clean with a sharp hop front, hints of mint, but a real candy store sticky peppermint and chewing gum sensation. Big herballity, a bit of tropical juice, there is a whole lot going in there, kind of crazy. Real interesting and lots of fun.

Overall a real unique creation, and still maintains some lager roots, with so much complexity and diversity going on. This could be the ?India Pale Lager? To set the benchmark perhaps.

I thought I hated the idea of an imperial pilsner, but this was great. Not too boozy, distinctive lager taste. I wouldn't hesitate to have another. Merry Christmas. I'm drunk.

Invested in the whole 4-pack since this brewery's beer got me into craft beers. I saw it advertised in BA mag recently and the ingredients sounded great. Poured into a pilsner glass: Appearance is clear golden, rapid bubbles, light body. Big white head settles to a ring. Moderate lacing.
Smells nice and grainy, bready, with a hint of banana esters.
Taste is similar to the smell, except with more earthiness. Gritty, dry, yet with tasty hops and grains that don't differentiate from one another in order to lend much complexity to the ale. Mostly the corn impression I usually get from imperial pilsners in general. Fruit note involves the banana.
This is still quite drinkable for its strength. That speaks well to its overall balance. Medium body, and moderate carbonation that's more crisp than smooth. As it warms and gets sipped even more, I pick up fruit flavor highlights at the finish, a hint of berry, nondescript mostly. Minty bite. Somewhat boozy. Not sweet to me. Just solid.
A big, lager-looking, heavy-earth grain-bomb. If that sounds good, this is for you.

Pours a hazy honey orange with a foamy khaki head that settles to a partial film on top of the beer. Small dots of lace slowly drip into the remaining beer on the drink down. Smell is of malt, honey, and candied citrus fruit aromas. Taste is much the same with grain, honey, candied fruit, pear juice, and garbage flavors on the finish. There is a mild amount of earth bitterness and an alcohol kick on the palate with each sip. This beer has a lower level of carbonation with a slightly crisp mouthfeel. Overall, this is a pretty poor beer with an odd and fairly jarring garbage can flavor that only gets worse as the beer warms up.

A: clear gold beer with some bubbles winding up from the bottom; a finger of ivory foam on top slimmed quickly but a sheen persisted

S: wet fresh grains and mountain flowers - clean and floral with some herbal aspects, something ripe and fruity underneath...

T: fruity sweetness with a fresh grain base, hops seem to run the floral route with bits of citrus; impressions of rose water, pale fruit, and chewy grain

O: a nice lager with a dedicated focus on the grains and hops, and the muddling of so many actually worked rather well, creating favorable flavors and aromas that are good for the style while also distinctly unique.

Ten malts, ten hops and ten percent alcohol provide an exponential taste that boldly steps from the confines of pilsner and becomes an animal all its own. It's pretty safe to say that these brewers went and "Dogfished" it up again!

Beer Thousand pours with an elegant honey amber clarity with a cottony swath of foam. Above it all swirls aromas that extend from those honey appearances and offer a floral, candied and herbal scent. Its flowery bouquet brings out the taste of sugar cookie and biscotti to support light caramel, vanilla and chai.

With the simple syrup taste reluctant to fade, the middle palate is balanced with lingering malt and a rising hop bite. Lemon, grass, pepper and tea flavors offer a much needed complexity for the malty underlayment and counters with its resinous bite. With notions of fruity and fresh tobacco and marmalade ebbs and flows, the taste is rounded, smooth and complex.

The spicy taste of hops and alcohol intertwine upon the finish, giving slight numbing with a peppery prickle and leafy, grassy and stemmy bitterness. Trending mead-like, the beer's aftertaste is honey and biscuit throughout.

It is an attractive looking golden-amber pour with a modest white head that becomes a ring. Looks like it should.

The aroma is grainy with an apple undertone, some light toasted malts, and a subtle sweetness.

The body is around medium.

Although I picked up no notable booze on the nose I get a lot more of it burning into my throat along with a vigorous grainy character and a big bitter bite to finish.

Meh.... Not anything special, but ok.

Fantastic beer. It's 10% and incredibly smooth -- and I didn't even age this.

Appearance - Pours Clear and purely golden in color with a half finger head that gives way quickly yo a flat, barren surface and the faintest trace of suds around the edge of the glass.

Taste - Follows the nose for the most part. Apple fruitiness and a lingering honey sweetness. Slight hints of alcohol. Mild lemon zing in the finish.

Overall - Drinks a bit like a chardonnay, though with a thicker body. It's good, but I'm a bit confused about its purpose; if I wanted white wine, I'd go get a white wine. I was hoping for something more akin to beer! This isn't the first DFH beer I've had that wished it were a wine, and I'm guessing it won't be the last.

Poured from a 12oz bottle into a pilsner glass. (Note: I was lucky enough to get the 4 pack with the bomber and vinyl package. Very cool idea from Dogfish Head!)

Appearance: This beer pours a medium to light gold in color. Nice looking head quickly rises up the glass and dissipates most likely from the alcohol. Leaves behind some nice, sticky lacing. Nice carbonation profile as the bubbles stream up the glass.

Smell: I get a lot of tart apple and citrus notes up front. Almost a honey like aroma as well. It smells well balanced and unlike any lager or pilsner I've witnessed. Has a bit of a Belgian yeast like aroma to it as well, almost a bubble gum or banana tinge but it's not overpowering. Very pleasant to say the least.

Taste: Same as the aroma, that crisp apple and honey tones really hit the palate hard! Again, not overpowering at all.. they mesh together well. A pleasant alcohol burn comes into play as well, similar to the profile of a Barley Wine. The malt and hop profile is very well in check, they actually cancel each other out. This could be from the huge grain bill that accompanies this beer, which might be the only flaw. But yet again, this is a lager, so having either one component really shine would basically take away from it's style orientation. Either way, DFH pulled off a very nice flavor profile here with neither the grains, malt or hops taking over one another.

Mouth feel: Medium carbonation, it's got a nice rolling mouth feel. Not too heavy, especially for a lager. It's crisp yet still let's you know that this is a 10% ABV beer so it's also a bit subdued as far as a overall thirst quencher as most lagers are profiled as.

Drinkability: Overall I was really impressed with this one. First off, I love the packaging. I paid $22.99 for the box set and felt it was well worth the money, especially with the vinyl and I wasn't even expecting another 22oz bomber of the beer in this box set, which really made happy when I opened it up. I love the idea of DFH going "against the grain" to use 10 different hops and 10 different grains to make a lager that has some actual character. The crispness of it's mouth feel paired with the nice apple and honey elements with a healthy kick of booze on the end makes this beer a stand out. An excellent effort from Sam and the boys down in coastal Delaware!

Quick review. Big, bold, unique take on a pils. The exceptionally mellow but well-defined hop character puts this a cut above for me. I like the fact that on paper this is a big beer, but once it hits your lips it still reads like a pils.

Pours clear, bronze, with a smallish head and lots of carbonation. Smell is slight alcohol, some kind of mustiness, slight lemon sour.