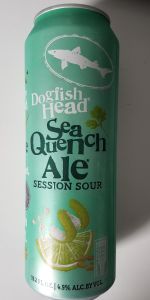 Notes: SeaQuench Ale is our session sour quencher made with lime peel, black lime and sea salt. It’s a citrusy-tart union of three German styles of beer blissfully brewed into one. We begin by brewing a straightforward Kolsch with lots of wheat and Munich Malt, then we brew a salty Gose with black limes, coriander and our sea salt. We follow it all up with a citrusy-tart Berlinerweiss made with lime juice and lime peel. All three beers are then blended together in the fermentation tank to create this German hybrid.
View: More Beers | Place Reviews
Recent ratings and reviews. | Log in to view more ratings + sorting options.

If you love lime like I do, this is a must have. A really refreshing summer treat. The subtle sour flavors of salt and lime are really impressive. Dogfish head proves again why they are one of the best breweries in the world.

L - Poured from a can into a Tulip glass. Color is a hazy, pale tan. Two finger head on aggressive pour.

T - Very much a light fruit taste. It almost comes off as a champagne over top of a beer. Lemon/Lime the more I drink it, but still that initial champagne taste sticks in my head.

O - Overall this is very light and refreshing. I probably won’t add it to my regular rotation, but it does seem like a perfect summer, outdoors, or camping beer. I recommend you try it.

This beer pours a cloudy, pale, orange/yellow color with a significant white head that dissipates very slowly. The aroma is sweet and fruity; predominately citrus. The taste is overwhelmingly that of bitter lemon. The mouth feel is sticky and syrupy.

Hazy, pale gold appearance with a initially large, dense white head and spotty lacing. Musty aroma. The sea salt is easy to identify; not too sure about 'black' limes, but a lot of lime nonetheless. Enjoying the tartness of the taste that matches up well with the citrus. Medium bodied, nicely carbonated mouthfeel leading to a lingering finish.

Light gold color with moderate head. Arima is sour with a hint of salt air. Mouthfeel is smooth with good carbonation. Taste is sour with lime and a bit of salt. Overall a great warm weather beer.

Look: Hazy pale yellow with a green tinge. Half a finger of thick white head with short retention.

Taste: Mild sour lime and wheat malt. Mildly salty finish. Reminds me of a limeade a bit. Refreshing and not overly sour.

Overall: A refreshing and light drink for a warm seaside day.

Had this after working far longer than I should have replacing a kitchen sink. I generally don't drink sours in cold weather but I was really thirsty in a way water can't touch. This hit the spot so well as far as taste and thirst quenching ability that I intend to have some in my beer fridge all summer long. Darn it was good. Sour enough to cut the dust but not so sour it makes you pucker. Really well done.

Possibly the greatest sour ever made!!! My absolute year round go-to beer. Very few other sours even come close.

Hazy gold color with just a hint of green and a nice foamy head that retreats fairly quickly but does manage a bit of lacing.
The aroma is fresh bread, lime and sea spray with a hint of grassy hops.
The taste is lime and salt up front, light wheat malt in the middle. The finish is back to salty lime fairly dry with some grassy hops.
The body is light/medium, smooth and easy to drink.
Altogether this would be a nicely refreshing beer for a hot weather cooler,, but it also goes well with most foods.

Hell no. The Jamieson of beers. You know what I mean.

Got this in can form from a local shop in Grand Rapids. Served in a goblet.

A: Pours a hazy gold color with a green tinge, has a white foamy head with little bits of lacing.
S: Smells of sea spray, limes, lemons, salt, peppers, and wheat.
T: Crisp and savory. Tastes of wheat, lime, salt, coriander
M: It’s crisp, dry and light.
O: I love berlinerwesses and this lime twist of the style is great, another good brew from Dogfish.

The worst beer I have ever tried. Absolutely disgusting.

The aroma is dominated by lime.

Hazy amber-orange topped by a 1 inch white head, thick, fluffy, and creamy. The head recedes fairly quickly, leaving sparse lacing. No head remnants at all after 15 minutes or so. The beer look is also hampered a bit by dark rather large floaties that settle to the bottom of the glass (I just poured, no attempt to decant).

The initial taste hits with the tart salty lime, which mellows into the middle, finishing with a very pleasant crisp tartness. The lime flavor is, of course, dominant throughout. It is a natural lime flavor like fresh-squeezed limeade. The malts (wheat?) to provide a good backbone, keeping this beer well into "you're drinking a beer" territory (I make than comment with reference to fruit-punch-doesn't-taste-like-beer entries into the style).

The body is moderate-thin and crisp with nice dancing on the tongue.

Overall, I quite liked this beer. It is refreshing, tart but not puckering sour, drifting a bit toward Margaritaville with the lime and salt, but with the malt presence keeping it well within Beer Town. Not really a "session" beer for me, though. One at a time will do nicely.

Right from popping the top, I got a nice whiff of soft lime juice tartness. It pours a hazy urine color, with an obnoxiously large white head that, thankfully in the case, has pretty poor retention. It does leave a slight cap, fat crown and decent lacing.

Besides the lime, I get some wheat bread in the nose and a perhaps psychosomatic hint seawater.

More wheat than I imagined up front in the taste, but with plenty of lime, and probably the most salt I’ve ever tasted in a beverage. What is probably a dry, wheaty finish with a twist of lime becomes a salty finish.

This is definitely a quenching beer, and I’d have no trouble putting some back on a hot day.

August 2, 2021 - Hazy pale gold, white head recedes quickly, hardly more than a couple of fine bubble left after a couple of sips, no lacing; Smell is light but distinctive; Good tangy mouthfeel; Flavor is not bad, only slightly sour; I'm not a big fan of sours, but this one is only mildly sour, not bad.

This beer is surprisingly pleasant. The lime and black pepper stay with you after drinking. The low alcohol content means that you can enjoy more than a single one. It’s a beautiful beer.