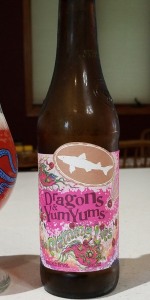 Notes: A music collaboration of epic proportions with The Flaming Lips, this lip smackingly tart pale ale is brewed with dragonfruit, yumberry, passion fruit, pear juice and black carrot juice for an explosion of fruit in every sip!

Poured a 12 oz bottle into a frosted glass.
Look is a pink/purple/amber with active carbonation and a bright, white thin head. Very unique.
Smell is fruity, almost champagne like.
Taste was similar to a shandy but with a slightly bitter/hops after taste. A bit of a bite when it clears the pallette.
Feel is thin to start, but medium to finish.
Overall a unique, refreshing summer beer, but wish it had a bit more hops to balance out the fruit and absence of malts.

I am continuing New Rock & Roll Beer (& Other Stuff) Sunday (Week 690). I had been thinking about going to the Punk In Drublic fest in PHL today, but it just became too logistically and monetarily daunting, so I gave up on the idea. I am not giving up on the idea of NBS, however.

I Pop!ped the cap on this latest oddball from DFH & began a slow, gentle pour into the awaiting glass. An in-glass swirl raised just over a finger of dense, foamy, rocky, pinkish head. like fresh-spun cotton candy, with decent retention, leaving some nice lacing in its wake. Color was a pinkish-Amber (SRM = N/A) with NE-quality clarity. Nose had the sweet fruitiness of Hawaiian Punch Red Fruit Punch, a mélange of sweet fruity smells that would be impossible to discern one from another. That is not meant as a slight, but just as a simple observation. Mouthfeel was thin-to-medium, not watery, but just a couple of steps ahead. The taste was a slightly tart, fruity mélange of flavors. It would be very hard for me to tell one from another, but it was a very pleasant fruity beer of which to partake. Therein lies the rub - if I am meant to rate to style & not to taste, then this is going to suffer as a result. The standard bearer for an APA is SNPA & this was NOTHING like SNPA. It would be better served if thought of as a "Fruit/Vegetable Beer", but I am growing tired of arguing that point. I found the color amusing, I liked the slightly tart taste of the fruit, but the lack of any discernible bitterness left it out of the running as an APA. Finish was dry and fruity, a nice novelty, but just not in keeping with the style. YMMV.

Collaboration with The Flaming Lips. Bottled on 3/27/18. 12oz bottle poured into a tulip. Pours ruby red with great clarity and transparency with bubbles racing upwards; fluffy white head with some pink hues that falls leaving great retention and sticky lacing. The aromas have hints of cherries and citrus. Subtle hop aromas in the background. Malts are there. The flavors are very clean, crisp and refreshing. More hints of cherry along with some pear. Some cranberry in the mix. Hints of vinegar. Mild tart and sweetness. Moderate to low bitterness. Finishes juicy and dry at the same time. Alcohol goes unnoticed. Mouthfeel is great. It's on the lighter side of medium-bodied with active carbonation. It's sharp, fluffy, smooth and easy to drink.

This is a solid brew. It's definitely not your traditional pale ale, which is what you would expect from Dogfish Head. It's like a fruit beer crossed with a pale ale with a mild sour vibe going on. It's definitely a hybrid brew. The craftsmanship is on point. It's very refreshing and fun to drink. I like it.

I'm a pretty big fan of Dogfish Head beers, but I have to say this one is pretty meh, not a word I'd usually apply to DFH beers.

It's colorful. But the aroma is muted a lot. The taste is a fruity blend. It's not particularly tart. It's just a little boring. Not a bad beer, just not up to the usual DFH standards.

Poured from a 12 ounce into a Teku glass. Bottled 16 March 2018.
3.75/2.75/3/3.5/2.25
Pale effervescent orange with very light, pinkish head.
Smells kinda sour and "fruity-herbal".
Tastes weird, light, and wheaty. You can't really tell there's any fruit. Or rather, it's faint, murky, and thin. Not objectionable at all, other than the weird muddled sourness. Extraordinarily reminiscent of Magic Hat #9, and if fact if a bar had this on tap under that name, I would just think the tap line was a little funky.

Disappointing use of allegedly crazy ingredients and allegedly interesting band. Not recommended.

S---Sweet & fruity. Berries is how I'll describe it.

F---Light & eminently drinkable. A bit of tartness, but I won't even presume to guess from which fruit.

O---This is legit different. I'm completely unfamiliar with yumberry & dragonfruit. Bur it works. It's a tasty beer. I'd get more if I saw it again.

Dragons & YumYums from Dogfish Head Craft Brewery
Beer rating: 83 out of 100 with 405 ratings