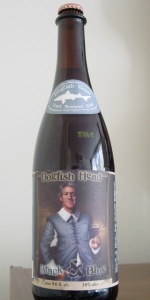 Berries and a bourbon like flavor. Very muted flavor in general for the abv. Not tart, not very sweet. Kind of bland/muted.

Treated as a straight up fruit beer, this was poured into a pint glass. The appearance was a glossy purple to brown color with a slight transparency about it. Floaties bounce off of carbonation rising to fill a one finger white to off white foamy head. It dissipates at a nice pace and leaves a small fairly thick ring of foamy lacing around the glass. The smell starts off with a some blackberries and blueberries (obviously, right!) and blends into a light caramel to biscuity maltiness. The taste was a nice mix between the blackberries and blueberries to a little bit of spiciness from the Belgian yeast. Yields more to the biscuity side than the caramel side in the taste. Its somewhat fruity in the aftertaste yet allows the spice to hit in the finish nicely. On the palate, this one sat about a light to medium in body with a decent sessionability about it. Carbonation feels good as it is and falls in and around my tongue appropriately. Overall, as a fruit beer, it works, with the Belgian spices snapping in and around my tongue, it wants to let you know, "hey, I’m not just any old fruit beer." I’d have this again, nice beer.

2/3/17...pours a purplish blue brown with flecks of sediment. High tan foam that settles. Strong fruity smell, black berries for sure. Strong fruity taste, berries blended into a tangy malt. Some hints of astringency dissolve into a belgian like goodness. Solid.

On draft at Lexington Beerworks
A-pours a ruby amber with very nice carbonation and short white head
S-Smells extremely fruity with a little bit of funk
M-med to full body a lot of carbonation on the tongue
T-Very fruit forward with both the blueberries and blackberries. Almost a sour beer. No alcohol flavor even with an abv at 10%
O-Overall just a good beer. Not really my type of beer but was good.