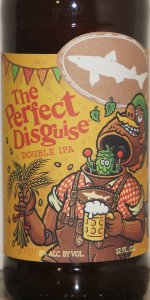 Notes: On the surface, The Perfect Disguise looks like a straightforward Kölsch with a crisp Kölsch yeast and traditional German malts and hops … but things aren’t always what they seem. With a quick sniff and a slight sip, you’re greeted by a creamy mouthfeel and full body thanks to the addition of a unique German chit malt - the first hint that this beer may be somewhat different.

Hiding deeper behind that German disguise is the double dry-hopping of an American Double IPA, with nearly 4 lbs. of German and American hops per barrel. It brings tropical flavors of citrus, tangerine, mango, gooseberries and peach.

The beer poured golden in color, and the body was slightly hazy. The head was a little small, peaking at one finger thick. The aroma was very hoppy, yet somehow delicate. The hops smelled gently spicy, and this was followed by a whiff of mango and pineapple. The taste was citric up front with lemony tang. The beer was more bitter mid palette, and the finish was somewhat spicy. The drinkability was very good, the mouthfeel was medium thick, and the carbonation a little prickly. This was a very balanced DIPA. I haven't had a Kolsch in quite a while, so not sure if this was very close to that, but I did like it a lot.

A double-dry-hopped double IPA fermented with Kölsch yeast? Sounds very Dogfish Head! Everyone's all about characterful yeast these days, and Sam just had to go and make everything plain again. Kölsches are known for being a great mix of worlds... the best fruity and estery elements of an ale with the clean fermentation and finish of a lager. Well, we're in a world where the dirtiest IPAs are regarded as the best, so of course he had to go ahead and buck the trend.

Pours a semi-hazy golden medium-amber color with an excellent head of white foam. Superb legs and cobwebbed lacing that just lasts and lasts. If held up to light, I can detect a bunch of sediment suspended in the body... how very 2013 of them! It's always fun to find beers like this in the age of opacity, so I'll give it a pass and even go on record saying I enjoy the appearance here. Good stuff, especially with the solid lace.

The nose is ripe red raspberry, earthy dankness and pomelo with a slight side of passion fruit and apricot. It's a bit grassy and stemmy without many specific descriptors, though, to be honest. Hey, Kölsch yeast is very clean, isn't it? I've used it in homebrewing before when I wanted a clean pale ale, and it worked well, but the specific hop notes definitely suffered and this feels very much in the same vein. Everything becomes a little more homogeneous when the yeast is cleaner, and I'm assuming this was lagered for a while as well. This has a nice smell, but if you're used to heavily aromatic DIPAs, it will be a little shocking to you.

On the tongue, The Perfect Disguise has a flavor pretty similar to 60 Minute, just with some new-school upgrades... earthy and citrusy with some apricot jam-like notes, a note of ripe red berry, and a bit of a floral component toward the finish. Overall, though, this just doesn't push the envelope as much as it probably thinks it does. I like the idea... Kölsch yeast can be a great component when it comes to pale ales, as it can lay bare a lot of the hop components that kinda depend on ester-driven yeast... I think this uses some newer school hops, though, and it just doesn't gel right for me. The feel is quite nice, and it drinks easy for an 8% beer (maybe that's the point?), but it just doesn't feel completely right to me. I wanted to really like this beer, but it's not up to snuff. That said, it is an interesting one and definitely has some uniqueness going for it.

Appearance is a really nice hazy light orange juicy bomb with nice 2 finger head. Aroma is very much fruit forward. Taste is quite fruity but something else going on hear that is quite unique and I can't pick out. Some light to moderate bitterness int he finish. It feels a little lighter than 8% as well. DFH did good with this one. In the world of IPAs this beer brings some unique aromas and tastes to the adventure. It's not mindblowingly great but it is quite good. Highly recommend.

Looks semi opaque, with quickly dissipating foamy head. About a 5 on the SRM color chart. Smell is sort of muted fresh grass, hay, distant hops- Tastes like fresh fruits for sure !, mild citrus,peaches. Feels well carbonated , mildly astringent. Almost a dry finish. This is a weird,interesting, fun type of beer- Overall Dogfish head pulls off another off beat brew- I said it tastes like coconut- It does not- Coconut was coming through by reusing an IPA glass which had intense Sabro hops-

Pours golden with nary a head. Aroma is boozy first with an earthy hop presence. Flavor packs a pleasant surprise with a slightly sweet malt coming to the forefront surrounded by mild earthy and fruity hop, quite smooth. Finish is rather clean and not bitter.

For me this is just an average IPA definitely not a Double IPA.

S - All hops in the aroma; fresh and clean combination of pine and tropical fruit.

T - Flavors are a nice blend of bready malt and hops. The hops flavors are similar the aromas, with strong mix of pine and tropical fruit, but also an earthy note that does not hit the nose. Slightly sweet finish, then serious, lingering hops aftertaste.

O - A great DIPA that does not shy away from hops but manages some balancing malt character.

Aroma: Full-on tropical fruits! Delicious before I even taste.