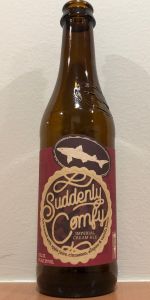 Notes: Things are suddenly getting real comfy around these parts with our latest off-centered creation – Suddenly Comfy.

Brewed with fresh apple cider, Saigon cinnamon and Madagascar vanilla beans, this Imperial Cream Ale is made with all the fixings of a great apple pie … just like grandma used to make.

Inhale and you’ll be greeted with aromas of pie crust and brûléed sugar. Sip and you’ll find notes of fruity sweetness. Savor and you’ll venture on a fragrant flashback that has you longing for the past.

A- A clear golden copper with a small white head.

O- A fun beer that delivers on being apple pie like, very easy to drink.

A: Pie crust colored head is fizzy and thin, quick to dissipate. Fair clarity with a dark orange colored body shows a good pitch of macro-bubble carbonation of average density. Thin ring around the vessel.

T: The aroma was sweet and candy like, reminds me of the old school necco wafers. Freeze dried apple slices, sprinkled with cinnamon and some spicy hops. The cinnamon really comes through strong throughout.

O: Overall per style its hard to argue, a big sweet and comfy dessert style beer with a warm toastiness and pie like spicing that brings a big appeal to the otherwise mundane cream ale style. Good range and balance of flavors/spicing brings this alive like a holiday dessert style beer, perfect for the fall/xmas season. Because of its huge sweetness and abv% drinkability is best limited to one.

Pours dark straw
Smells of cinnamon and vanilla
Taste cinnamon vanilla with an apple malty aftertaste
Mouth feel is smooth with hints of spice.
My favorite thing about this beer is how well this beer goes with the season. Drank two after eating comfort food on a cold fall night and it really fit the bill. Would I want one at noon on the Fourth of July? No. The special thing about beer is how some thing great like this can sneak up on you in a really special way. Obviously breaks the style but who cares it a a fun seasonal and it’s a great follow up to punk’in.

Pours a slightly hazy light amber color. Thin white head dissipates quickly, but leaves some lacing around the edge of the glass. Apple aromas and flavors. Notes of the vanilla and aforementioned spices. Strikes a good balance of tart and sweet. Heavy body. Tastes and feels a lot like drinking apple cider (a real, non-alcoholic apple cider, not the super sweet alcoholic ciders such as Strongbow). Finish is sweet (I feel it in my teeth) and quite acidic. I would say this finish is the only detractor. This beer was bottled in October, and the flavors are definitely associated more with Fall. However, I never saw it on the shelf until a few days ago. According to the brewery’s website, this is the 1st year of it, and it was released in October-December, so that timing sounds more like they intended it to be a winter seasonal.

L: Hazy copper with 1/2" off white head when poured hard into tulip. Head dissipates quickly. Little to no lacing as this one goes down.
S: Different...not bad. No hop presence. Nutmeg maybe? Unique for sure.
T: Similar to some of the pumpkin seasonals I've had but not as strong. Vanilla? Maybe a hint of lemon? Again, unique. This is one of those beers that I enjoy for about the first 5 or 6 sips because if its unique character and then I find myself yearning for a beer that tastes....well....like beer.
F: Slick with minimal carbonation.
O: Yeahhh.....its a "no" for me. I support Dogfish for searching out unique flavors and stepping outside of the box but this tastes like I just choked down a Yankee candle.

Pours an orange/amber with a finger of dense, off white head

It smells incredibly sweet, with notes of cinnamon, maple, peaches, sweet apples, and a bit of an oak character, probably from the vanilla beans

The taste is more of the same, with the apple flavors being more pronounced towards the end of the sip, in more of a tart way than in the nose

The feel is very creamy (as the style suggests) and is very easy drinking for 8% abv, beyond smooth

DFH got this right on with the whole apple pie vibe, it's a perfect dessert beer and I'm loving every last sip of it, very glad I have 7 of these left

On tap:
(Note: there is only a slight nod to the claimed style of this review. I believe it fits better as a fruit/spice beer than cream ale for many reasons)

Initially the beer hazy a hazy look to its orangish amber color, but gains clarity as the glass empties. The various streams of carbonation sustain an off-white foam that covers 3/4 of the surface before I dig in and for most of the beer.

Given this beer could be a fruited beer with cider inclusion, or a spiced beer with the obvious fall pie spices involved. So, pointing aside, this beer smelled like straight up apple strudel to me after it was first put in front of me. The tart-ish apple was up front with the malts forming enough of a sweet bread note to drive the impression home. This impression gave way to the spices as I dug into it, bringing more of an apple pie with a granola crisp topping. As I sipped, the aroma flittered between these similar impressions.

Starting off, the mulled apple cider flavors are front and center, harkening all the way back to my initial whiffs. The spices stay to the side, and the very light tartness of the apple mostly defines the drink. As the beer warms, the cream ale starts to sneak in a little in the back of the taste, as it meets the apple and lingering spice there. For an 8% beer, this has a light feel and clean palate. It is actually fairly dry, with just a little pseudo-sweetness from the background vanilla note.
(Note: the bottle I had a month later had a more distinct vanilla and allspice presence)

I’m sure this beer is exactly what the brewer was trying for, and is another interesting/fun mix of food and beverage from the folks who consistently want to bridge that gap.