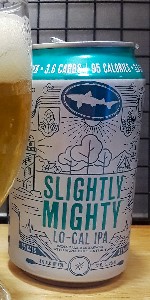 Notes: A lo-cal IPA that is slight in cals and carbs with mighty hop flavor! Slightly Mighty has all the flavor and tropical aromas of a world class IPA, but with only 95 calories, 3.6g carbs, 1g protein and 0g fat. Brewed with locally-grown barley, and a touch of monk fruit that delivers body and complexity but adds zero calories or carbs, Slightly Mighty is light-bodied and offers a lingering balanced sweetness.

Rated by artf from Pennsylvania

Reviewed by Cdriver0414 from Kentucky

5/5  rDev +37.4%
look: 5 | smell: 5 | taste: 5 | feel: 5 | overall: 5
I have spent a lot of time searching for a high quality low calorie ipa. The monkfruit in this ipa takes it to a different level for a lighter beer. It may not compete with the best ipas in the world but if you are looking for a crushable low calorie ipa that does not lack in flavor, I can't recommend this one enough
Jun 26, 2022
Rated: 3.82 by mdaschaf from Indiana

Reviewed by BroncWise from Texas

I was worried the monk fruit would create a terrible aftertaste. The aftertaste is there, but nowhere near what I expected. In fact it’s very minimal.

3.83/5  rDev +5.2%
look: 4.5 | smell: 4 | taste: 4 | feel: 3 | overall: 3.5
Look: Cloudy apricot with 3 finger foamy white head. Smells fruity with light hop notes. The taste is grassy with some apricot with hints of hops, The mouthfeel is light which is expected for a light beer. Overall this beer surprised me, it is low cal but Dogfish squeezed every ounce of flavor out of the light brew. I appreciate the effort of Dogfish to try their hand at a light IPA. This is my go to brew when I want to back off the high alcohol content.
Oct 16, 2021
Rated: 3.7 by TheMole from Nevada

3.66/5  rDev +0.5%
look: 3.5 | smell: 3.75 | taste: 3.5 | feel: 4 | overall: 3.75
12oz. can served in a shaker pint. Pours a dull orange with a loose, quarter-inch, off-white head and a slight haze to the clarity. Nose reveals hints of citrus, herbal notes and a biscuit malt. Taste consistent with nose - less citrus presence. Everything more or less coalesces together. Mouthfeel is light in body with an assertive carbonation that leaves a residual prickle across the tongue. Overall, a pretty drinkable session IPA.
Sep 02, 2021

3.68/5  rDev +1.1%
look: 4 | smell: 4 | taste: 3.5 | feel: 3.75 | overall: 3.5
This beer is marketed as a low ABV / low calorie IPA. I have adjusted how I approach such beers. I don't compare them with 6+% IPAs, since even though they are entered here as the same style, in reality, they are not the same style. Therefore, I now approach them on their merits as a hoppy low ABV ale. I expect them to be thinner, less malty, and hence less well balanced, but I also expect them to be enjoyable as, for example, a summer crusher.

It has an orange slightly hazy appearance, well carbonated, topped with a tall airy white head, recedes to 1/4 inch fairly rapidly, but has good retention after that.

The initial taste presents a slightly bitter, slightly harsh orange rind flavor followed by a mild melon-like taste. The flavors tend to munge together rather than remaining distinct, resulting in a not unpleasant but muddled taste. After the initial hit of mild bitterness, it mellows out. The finish is fruity, mild, and on the dry side. The aftertaste is pleasant but mostly unremarkable. Half way through, though, a bit of sharpness builds in the aftertaste.

Overall, OK. Easy enough to drink, decent, if muddled, flavors, and a dry finish. Still, though, I wouldn't put this at the top of my low-cal crusher list.

F: resinous silky texture; light-bodied, but with a plush skin, and oily legs in the finish... its hop pop and the stealth dry cut enlivens the palate, stoking a mellow, fiery warmth

O: skeptical at first, but the hop flavor/expression is relatively booming here... dry, but not thin... tepid yet beckoning introduction; it had me wanting another well before the end (1801)

Rated by AuSablePine from Michigan

Reviewed by tdm168 from Pennsylvania

Overall, a good beer and likely one of the best options for low calorie beer.