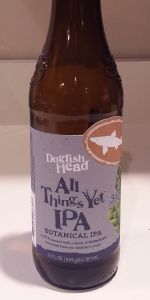 Notes: All Things Yet IPA is spiced more like a spirit than an IPA, brewed with a blend of botanicals borrowed from our distiller’s stash. Marring the intensity of a classic American IPA with the bright and citrusy sensations of Dogfish Head Distilling Co.'s Compelling Gin. Brewed from barley malt and rye, and spiced with Centennial and Simcoe hops, we've layered on the complexity with a unique blend of botanicals, including juniper, coriander, lemon peel and green cardamom. The result is a singular drinking experience which evokes fine gin cocktails and good times. The ample aroma and dry, clean finish are an appetizing lead in to many memorable sips.
View: Beers | Place Reviews
Reviews: 4 | Ratings: 22 | Log in to view all ratings and sort

I have been doing a deep delve into Fruit & Field + Herbed & Spiced Beers the last day or so & this seems like an excellent way to wrap up this leg of my Bottle backlog eradication here at Chez Woody. This, like the Brooklyn Rosé de Ville, was a recent acquisition from the Friendly Greek Bottle Shop on my last visit.

From the Bottle: "An IPA brewed with a blend of botanicals borrowed from our distiller's stash."; "Ale brewed with Juniper, Lemon Peel, Hibiscus, Coriander, Green Cardamom & Chamomile."

I was making the jump from the previous wine tasting to cocktail hour! I could hear my favorite bartender, Russell "Rocky" Albrecht, upon coming on duty, shouting "Cocktails!" I would stick with beer, but it was all the same to him.

I Pop!ped the cap off of the bottle & began a slow, gentle C-Line pour into the awaiting glass. I did this with some trepidation as there was a good bit of flocculate visible on the kick/punt. I was striving for clarity on the initial pour with an eye to getting the adjuncts back into suspension on a subsequent pour. It foamed beautifully, forming two-plus fingers of dense, foamy, rocky, bone-white head with excellent retention, leaving loads of lacing in its wake. Color was that of liquid sunshine: Yellow-Gold (SRM = 4 - 5) with NE-quality clarity, prompting The Gelt Gang of Midas, Mammon & Croesus to join me for Cocktail Hour. Nose reminded me of the first time that I drank Gin.

It was my first overseas liberty port, in Barcelona, Spain & I was proffered a Tanqueray & Fanta Limón. One sip & I was hooked! I became a frequent G&T, or more precisely, T&T drinker for a long time until better beer came along & I made the switch.

Nose was highly evocative of that cocktail. The tang of juniper & the spritzy citrusiness of lemon were what carried this one for me. Mmm. Mouthfeel was medium, about on par. The taste was so cocktail-like that I began to think that perhaps I should have a mixed drink to follow this one, but then I remembered that I have enough beer on hand to float a battleship & that should remain my priority. It is hard to describe a Gin & Lemon if you have never had one, but if you have had Gin, we can start there. It is not a distilled liquor to be drank neat. Its botanicals, especially the juniper, give it a harshness that cries out for set-ups. Tonic with a lemon twist is common, but the way that Fanta Limón shined was that it was not a soda pop to be drank on its own, but to be mixed for an extra spritziness. A lemon twist simply enhanced the effect. This beer was much like that - Gin with its trademark juniper with bright, spritzy lemon citrusiness. Finish was Extra Dry, by way of Bombay, old man.

Now, let's go for that remainder, shall we?

I vigorously swirled the remainder while it was still in the bottle. Once I was satisfied that nothing remained on the punt/kick, I let fly with an aggro pour the likes of which I have not performed in some time. The color became only slightly hazier, but the nose expanded exponentially! Now, the tropicals were REALLY prevalent & not just juniper & lemon. Do I regret doing it my way? Heck, no! It was like two different drinks from the same Bottle! YMMV.

Botanical, dry, sprucy... these words are commonly used to describe IPA. But they also share commonalities with gin. So when on sips IPA, it often evokes a similar palate sensation with gin. So, it wouldn't take much to push the beer closer to the spiced spirit and that's just what Dogfish Head brewers did.

All Things Yet Botanical pushes further into the blended spirit by capturing the senses with a heavy spruce, spice and ether enhances scent. Pale straw and woven with a moderate haze, the frothy ale leads in with a supple sweetness of honey, agave and mild breadiness.

The beer's ample carbonation dissolves the sweetness and maltiness while providing a brightness to the fruit peels and herbs that largely frame the middle palate. Lemon, grapefruit, orange peel and white grape precede a spicier tone of cardamom, juniper, grassiness and gently muddled pine needles for a peppery, gripping bitterness that speaks to the sticky and spicy resins of more aggressively bittered IPA.

Medium bodied and trending dry, the beer's fleeting sweetness allows for a late palate of distilled spirits and a simmering spice on the back of the tongue. Blooming botanical spices keep the gin influences front and center as the IPA rolls into a long and persistent bitterness to the delight of a more West Coast IPA appeal.

Poured from the bottle into a Spiegelau IPA glass. Bottled October 9th 2019.

Mix of botanicals and hops on the nose for sure. A lively mix of juniper, coriander, and crispy malt caramel aromas. Hop angle seems to go a little floral to tea like which is a good quality to the added herbs.

Palate seems to go in a different direction. A bit of a weakened and wet mouthfeel, that brings a bit of herbal heat on first sip. Hot hits of ginger like flavors and herb at first. Subsequent sips get into more rind and citrus peel like character. Dried out lemon and citrus peel, with hot zest like bitterness that washes pretty quickly on the palate. Nice aftertaste of good minty like herbs and malt sweetness to match.

Some very neat flavors, but strangely doesn't seem to have as much hop character to discern from. Neat tasting brew though.

All Things Yet Botanical IPA from Dogfish Head Craft Brewery
Beer rating: 88 out of 100 with 22 ratings