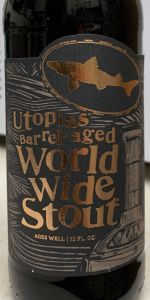 The experience of drinking Utopias is often described as ritualistic. Rare and often rumored about in the darkest corners of the beer community, this variety of World Wide Stout is dark, rich, roasty, and complex.

I think this is a pretty neat concept. It's a well-known-and-revered stout, aged in barrels from a much more elusive beer.
It's like getting a wrapper from a collectable candy bar.
12 oz bottle into stemless wine glass, shared with wifey.

Somewhat thin, mostly black with some ruby highlights in the more light-vulnerable areas, with no head.

Flavor is too much of a good thing. This thing is so boozy it's hard to distinguish very many actual characteristics. I'm going to try though. Sherry, oak chips, caramel square, red licorice, horehound, hop oxidation, ethanol, then at the back end you see more sherry, black twizzlers, and very slight sarsaparilla. All of this buried under three liters of Smirnoff.

Feel obviously is liquor-like. Save for the plentiful carbonation. Thin and hot, that's practically all you need to know. It drinks like a carbonated shot of Vodka.

Overall, I've never had Utopias, so I can't rate on that scale. I can say that this beer was overwhelming to me. I'm not going to sit here and say it sucks, but it's definitely not something to be bought and enjoyed immediately. You'll need patience, I think. (Throw these bottles in a time capsule and forget about them for a decade!)

Obviously at 17.3% you shouldn't have the expectation of this being smooth, but this was a hot mess. I like Sam Calgione and his out-of-the-box brewing, but this was too much for me. I think this baby needs to mellow out 5-10 years before we can see the actual WWS pop its head through this boozy mess. I did not find WWS base anywhere in this beer.

Closer to a round of shots than a good barrel-aged stout. Highly likely I will not return to this one.

Served in a snifter from the glass.

Appearance: Semi thick body coming off almost opaque with a dark brown tinted black body and a dark tan head which initially rose half a fingers length off the body.

Smell: Champagne like aroma which hovers the nose yet leaves just as quick as it goes in.

Taste: Sweet complex brew, feels like butterscotch candy meshed with marsala wine and a hint of red grape. The brew had a yeasty feel which doesn't let go of the palate.

Mouth: Semi thick body with a medium to full carbonation. Finish us ridiculously sticky, sweet finish just wants to linger like gum under your shoe.

Overall: Beast of a brew, a bit boozy but seriously worth grabbing more than two. Unique taste which makes love to your tongue. Salud!

Pours ebony with a 1/4" tan head, which fades to a wisp. Minimal lacing.

Outstanding! Lives up to the hype in my book. Albeit price is a bit steep.

An even pour yielded a small, noisy tan head which quickly dissipated; no lace.

Pours a dark cola brown that appears as black once it sits in the glass and props up a tan head that is apparently in the Witness Protection Program because it almost immediately went into hiding.

The nose is a little boozy, with a sherry note that fades to stone fruit, which I absolutely LOVE, and some dark chocolate as well. I am officially salivating. Wow.

The taste features the stone fruit flavors prominently, and there’s a big dollop of the dark chocolate that is truly delicious, and a bit of booze at the very back of the palate.

The mouthfeel is thinner than I thought it would be, but as I rolled that around in my old beer nerd mind, it made sense - I wouldn’t anticipate that a cognac or sherry would be thick and creamy, and that’s what I’ve seen Utopias compared to the most, so it shouldn’t surprise me that this magnificent beer actually feels carbonated!

I’m really glad I got to try this world class beer - it is definitely worth seeking, IMHO.

Pours near black dark brown with a mocha colored cap that disappears instantly. Aroma is sherry, roasted chocolate malt, stone fruit, vanilla and so much more. Flavor follows the nose. I've had Utopias on several occasions and this really takes over the flavor of the WWS which is already a fabulous beer. Feel is a bit thin for a stout but as good as this tastes it's hard to fault. Overall a phenomenal beer.

This beer pours a luscious pitch black color. There' was actually quite a bit of head to this beer - 2 finger. The head actually lasted a long time considering the super high ABV. There's no lacing on the glass.
The aroma is so damn complex, I can't do justice to it. I get a good whiff of the utopia barrel. I get chocolate, toffee, caramel, dark fruits, and vanilla.
Taste is amazing. I get the utopia in here. I get, like the aroma, chocolate, toffee, caramel, dark fruits, vanilla, and more I just can't put words to.
The body is thick, and full, as expected. There's so little alcohol burn here, but you know it's a sipper by the feel.
This is amazing. That's all I can say.

12oz bottle dated 3/20/20 poured into a DFH Signature Chalice. Big time chocolate cake aroma coming off the pour. Body is thinish but expected for the ABV. Minimal head that slowly recedes with no lacing. Alcohol legs coat the glass. Tastes like chocolate cake drizzled with Utopias. Barrel char is faint. Mouthfeel is velvety. This is a decadent treat. I hope DFH and BBC produce this again, and expand the distribution.

*11/07/21 drinking a 2021 bottle found on a shelf in Florida. Thank you DFH/BBC for making my wish come true. Not as good as I remember, but still fantastic. Glad I picked up two 4-packs. Ratings were slightly downgraded, but I’m still loving this beer.

Hard to believe I’ve never reviewed a WWS of any kind, so here we go on a lovely sounding 12 oz. bottle.

The pour is Pitch Black without the screaming aliens & I’m having a miserable allergy day so it smells mostly like malts, booze, & snot.

Utopias Barrel Aged World Wide Stout (once I clear my nose) is a shrine to booziness. Booze & barrel stamp all over this beer, leaving little beer-like stuff to the imagination/palate. Fruity in a porty manner rather than a wine-y manner or actual fruit manner, which is my preference in stouts, laying on top of bourbon, port, brown sugar, figs, molasses, with a strong spike of vanilla on the finish. Heavy – this is a meal in a bottle. And as delicious as it is, I’m already getting sleepy about halfway through.

A beer that mimics the barrel & sips more like a liqueur than a brewski. My dad wouldn’t recognize this. Still an excellent…beer.