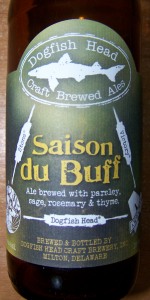 Notes: Plans call for Saison du BUFF to be a 6% alc/vol Saison brewed with parsley, sage, rosemary and thyme. This beer will be brewed three times, once at each brewery using the same recipe.
View: Beers | Place Reviews
Reviews: 467 | Ratings: 1,676 | Log in to view all ratings and sort
Reviews by ogman:

Had in a four pack I picked up in Delaware. I thought this was only a one time thing but I guess they keep brewing it. Fresh bottle date, nonetheless. Pours yellow, mostly clear, with a super fluffy head.

Smell is... Odd. I can't put my finger on it but there is a ton of spice and herbs here. Somewhat medicinal. Had one sip and I don't like this at all. So I let it warm up, still bad. Very medicinal in the herb choice, almost like a liquid Ricola cough drop. Drain pour.

Had another bottle a few days later, drain pour. Not good.

Vile. Loathsome. Worst beer ever. Since this is a Dogfish Head and Stone collaboration, I was expecting something potable if not profound. But like many collaborations, Saison du Buff is the crap of both worlds. And the Rosemary! What kind of savage puts rosemary in beer? You might as well use lavender and bathe in it. Dirty bath water tastes better. Washed it down with Choc Lobster.

Bottle: Poured a cloudy dirty beige color ale with a good foamy head with good retention and some lacing. Aroma of spices including spices with solid rustic malt backbone and some nice fruity floral ester. Taste is a great complex mix between some rustic malt with some great notes of sage with nice floral undertones. Thyme and parsley are harder to detect then the other ingredient. Body is full with good carbonation. Solid offering that I would love to have regular access to.

Appearance: Very clear, no haze at all, pale gold with a very tall head made of fine bubbles.

Nose: Herbal, hops aroma, fresh apples, tart cherries, slightly citrusy like candies lemons, not at all a typical Saison. I can't pick out the specific herbs used with the exception of sage. Everything else melds into a strong herbal nose that is intoxicating.

Taste: Very light mouthfeel, spicy and herbal, lemons, it has a nice saison bite and a great pepperiness that comes through to a smooth finish. Slightly malty but the hops cut through that pretty quick.

This was a very interesting take on a classic Saison. I commend the trio of breweries use of unusual ingredients in the brew pot to literally spice things up a bit. I can't wait to get a hold of the other two brewery's versions and see how they compare. I'd recommend drinking this one as fresh as possible to preserve that great herbal character from the added herbs.

Pours a pale yellow color with a decent two finger white head that falls with some lace left behind.

Taste is bready malt with good yeast notes to start moves into tart citrus lemon mostly. Finish is lots of spice mingled with grassy hop notes and some light bitterness. Overall decent enough finish just seems like too much spice for my tastes. Would have enjoyed this one much more if the spice was knocked back a notch.

Mouthfeel is good light with some nice peppy carbonation.

Drinkability is hurt for me by the spice give me more wet horse less spice but just my opinion.

Small head over a light yellow, slightly hazy body with fast bubbles.
Smells nice and spicy, tangy, subdued funk. Reminds me of an antique outlet, maybe weathered indoor upholstery.
Tastes crisp with a unique bitter aftertaste. Rosemary really stands out here.
Interesting, even with the blatant rosemary it gave me the impression of being like a cucumber herbal/medicinal aftertaste. Even though I like this for its unique flavor, I'm not sure it would be in regular rotation for me if it were available in my state. But I would try it again as it's a solid collaboration brew; in a way it made me think of the cucumber saison by Cigar City. And that's refreshing.

A: Pours a slightly hazy golden color. About one finger of a white foamy head with almost no retention at all, dissipates very quickly. High carbonation, streams of bubbles are visible coming from the bottom of the glass. Almost no lacing left. (3.75)

S: Very strong smell of thyme, ocimum, sage and rosemary. After many sniffs, I still can't detect the parsley. The malty character of this beer is pretty much all hidden by the strong herbs smell. I can feel grassy and spicy hints and also lime zest. The aroma itself is very refreshing. More so than the taste. (3.5)

T: I thought the taste would completely follow the nose, but it isn't quite that way. Thyme, sage and rosemary stand out upfront, but the malty character appears later on, with a lot of carbonation. Belgian yeast is strong, giving the beer a touch of funkiness. The alcohol is pretty much undetectable. (3.5)

O: Even though I found this brew very interesting and unique, the addition of the herbal spices wasn't great. A more citrusy touch and a less herbal touch would make this beer better in my opinion. Still refreshing, not as much as other Saisons, but very unique. I would have this again, but there are many other Saisons I would pick over this one. (3.5)

Smell is a riot of flavor; one of the best smelling beers I've had in a long while. Yeast comes through off the top, with the herbs close behind. Sage is the predominant flavor; the parsley and thyme are both there, but considerably more muted. The rosemary is nearly invisible. All in all though, it's a beautiful aroma -- I could be satisfied just smelling this one for a while.

Taste is a bit more one-dimensional. Where the aroma was a shape-shifter, always on the move, the flavor of this beer does one thing (a very intriguing thing, mind you) well, and that's it. Nice bitterness on the sides of the tongue and on the swallow. A drying finish keeps things from getting cloying. Notably, this iteration of SDB seems hoppier than its cousins from Stone and Victory.

Mouthfeel is fine and well. If anything, it could be a bit fuller; I really like my saisons foamy.

Bottled in 2012C. Poured in to Founders tulip.

S - Bready malts, clove and citrus up front followed by thyme and sage. Not getting the rosemary specifically. The herbs start as the background aroma but become very dominant after they are initially detected.

T - Saison flavour profile up front that are well balanced by the herb additions. Bready/grainy malt, lemon and clove up front. The sage and thyme enter as secondary flavours and become especially noticeable in the finish.

It had a hazy pour with I would say a 2.5 finger head. As soon as I opened the bottle it smelled immediately of herbs, but mainly thyme. When I tasted the beer I got a slight amount of sage followed by rosemary, it finished with the grassy bitterness of parsley. The mouthfeel was actually surprised me and was a bit spicy. Overall it was a new experience for me I never had a very strong herbal beer before so this was hard to rate. But I do think that this beer would go good with a roast chicken or it could probably hold up to a grilled pork chop.

S - Yeasty, peppery - spicy white pepper notes coming through strongly. Some thyme is present, making it even more herb like.

T - Starts off lightly malty, somewhat grainy. Mid-stream brings on some peppery yeast notes, spicy. Pilsner malt makes an appearance in the background. Finishes yeasty, spicy, some of the rosemary and thyme makes it in.

M - Moderate beer body, thick and creamy. Appears to be driven by the strong carbonation profile. Finishes with some bitter cling on the tongue.

D - Decent drinkability. Flavors are a bit unique for sessioning. ABV is high, but well hidden. Somewhat filling at times due to its higher carbonation.