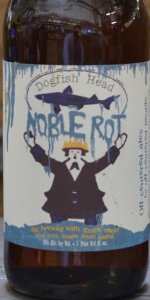 Notes: This saison-esque science project gets complexity and fermentable sugars from two unique wine grapes sourced with our friends at Alexandria Nicole Cellars in Prosser, Wash.

The first addition is unfermented juice, known as must, from viognier grapes that have been infected with a benevolent fungus called botrytis. This noble rot reduces the water content in the grapes while magnifying their sweetness and complexity. The second is pinot gris must intensified by a process called dropping fruit, where large clusters of grapes are clipped to amplify the quality of those left behind.

Noble Rot is brewed with pils and wheat malts and fermented with a distinct Belgian yeast strain. It has a spicy white wine body and a dry, tart finish.

A: The beer is a light yellow color, with a thin white head that fades quickly and leaves a thin lace on the glass.

T: The taste starts out with some mild sweetness from flavors of citrus, fruit and spice which then transitions into a bit of tartness as the esters come in from the Belgian yeast. The malt character is on the thin side and there is very little hops presence, but still a good balance. The after-taste is slightly tart.

O: Tasty with good complexity, goes down easily, not too filling, well-disguised strong kick, good representation of style, this is a decent beer to drink for a long time if you’re in the mood for the style.

Noble Rot opens with an almost Flemish nose, full of sour and tart aromas that tingle the nasal passages. Lemons, oranges, limes, and pink grapefruit dominate the profile, along with a good backing of the kind of sour funk that goes well with Flemish sours (though nowhere near the potency). A good layer of baguette lies just beneath, joined by brown sugars and touches of caramel. Overall, the nose is intriguing, and obviously bends toward the citrus and sour profile, though is balanced enough by sugars and grain aromas to not smell like sour citrus candy.

On the tongue, the beer is more sour than the nose let on, beginning with a huge dose of fresh-squeezed and unsweetened lemon, lime, and grapefruit juices, mixed with a sour flavor that nicely complements the tartness, much like eating just the skin of a peeled grape or kiwi, without the sweet center to offset the tangy rind. These opening flavors make up the vast majority of the flavor profile, making the beer taste somewhat like sour candy. Some brown sugars and toast crust lie beneath, but can get easily lost against the sour/tart blast. The aftertaste is more sour/tart, perhaps even strengthened by the dying off of sugars, and at least for this reviewer is mixed with an overtone that reminds me of accidentally biting into a grape stem, or gnawing on a fresh-cut green tree twig, being heavily woody and plant-like. This latter flavor doesn't quite fit with the rest of the brew, and makes the aftertaste moderately unpleasant. Mouthfeel is medium-light to medium, and carbonation is medium to medium-high.

Overall, once I got used to the sour/tart combo, I found the beer quite good, especially after I noticed that the flavors were strong enough to mask the 9% ABV. I do wish something could be done about the tree twig aftertaste, but luckily another mouthful of beer quickly solves that (admittedly, this is a very dangerous solution). Certainly an interesting brew, and like almost everything Dogfish Head makes, is worth trying.

a beautiful clean light yellow pour, 2 fingers of fluffy/foamy bright white head which dissipated slowly, tons of visible carbonation, excellent head retention, great lacing. smells of bready pilsner malt, lemongrass, white wine, coriander. slightly tart/sour on the palate, a spicy black pepper feel up front which i'm guessing is from the belgian yeast strain, definitely tasting a lot of white wine grape flavors, nice and funky farmhouse flavors. this is a wonderful saison with a slightly tart/sour feel to it, medium in body with high carbonation it is both refreshing, and sweet.

as far as the weird one offs that DFH releases, this is one of the best i've had. a very delicious, very refreshingly perfect for this 60 degree day, slightly sour which is exactly what i was hoping for. love it.

A: crystal clear bright straw yellow. Lots of carbonation.. almost looks like cider or chanpagne. Very tiny trace of a head but the carbonation keeps it from looking very flat. Kin of weird for a saison, but it looks pretty.

T: Sweet up front and then it dries out gradually. Kind of like a champagne actually, but with malt and very light hops. Apple, white grape, apricot. Some mustiness but not harshly so. Nice tasting.

M: The tang and carbonation really stings the tongue at first but then it leads into a sweetness, and then it dries out. very short lived finish, overall very clean. a complex and fun moutfeel.

O: I don't think the carbonation was obnoxious but I wish I could try it without so much...maybe it would be improved and taste more like beer to me. Don't get me wrong, I enjoyed it, but I want more out of this beer. Would like to have this for New Years!

Pours a clear golden color with a huge, fluffy paper white cap. Chunky sheets of lacing coating the glass. A large amount of bubbles are present.

The aroma is of white wine, fresh peeled grapes, and an earthy must. Nothing too deep or overly complex.

Tart white grapes carry you through to a finish of white wine and earthy must. The flavors are all overlapping. Clean, tart, and dry. It is almost like a blend of sparkling white grape juice and white wine.

I really don't know what to think about this beer. I'm not a wine drinker, but I appreciate the attempt at marriage. I have a hard time grading this as a saison so I am going on mostly personal taste with a bonus point for originality.

Beer is a clear golden colour with a smallish white head. Decent retention, head fades but not entirely. Some lace.

White grape juice, yeast and some lemon. Does smell a bit "musty".

Overall, not bad, but I can only take the grape juice flavour for so long. Would be nice if that was toned down and the yeast ramped up.