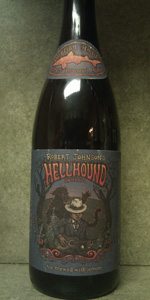 Notes: Hellhound is a super-hoppy ale that hits 100 IBUs in the brewhouse and 10% ABV. It's dry-hopped with 100% Centennial hops at a rate of 100 kilos per 100 barrel brew-length. Can you tell we're stoked for this mighty musical centennial?

To accentuate and magnify the citrusy notes of the Centennial hops (and as a shoutout to Robert Johnson's mentor Blind Lemon Jefferson), we add dried lemon peel and flesh to the whirlpool.

The beer pours a slighlty hazy copper color. The head was a solid 2-3 fingers and was a slight off-white. There wasn't much lacing throughout the drinking. Looks like a lovely brew.

I believe the beer has lost some of it's hoppiness. There is a good deal of sweetness in the nose, as well as some graininess. There is a wee bit of lemon, but not as much as I would have thought. Toward the end, there's a smidge of alcohol.

Much sweeter than expected. There is a lot of grain and malt character, possibly from a large amount of pilsen malt. There is a bit of citrus, both lemony and a tiny bit of grapefruit. The citrus is less like hop citrus and more like zest, most likely from the lemon. There's some big caramel and slight toffee as well. The aftertaste is like eating lemon pith - it's very pleasant. There's some slight alcohol on the tongue as it warms.

This is a big and almost syrupy beer. It's not hard to drink, but it's pretty much a sipper. There's a slight bit of warmth, and just a little carbonation.

This beer is good, but isn't all that special. It could be a year-round like 90 Minute IPA. I enjoyed it, but it's almost forgettable for such a cool sounding beer inspired bu Robert Johnson. It's good, not great.

Had this on tap late summer '11 at the advice of an enthusiastic barkeep.

But my hopes were dampered upon smelling this beer. Was expecting to encounter a nice citrusy hop bomb, but instead smelled some dirty, earthy off concoction. Yuck.

Took a hard first sip and found myself recoiling. Very unpleasant musty taste, the malt & hops are fighting each other in this beer. Lots of unpleasant hot alcohol flavors too.

Took a break and drank some water after the first taste just to re-gain my bearings. Took another sip and it was just as disjointed as the first.

Struggled through a few more sips then pushed the glass toward the barkeep. Told him I hated his suggested beer and thankfully he took it off the tab.

Look: Poured into a snifter, it pours with a HUGE fluffy head which retains for a long while. Hazy and amber in color.

Smell: It's like hoppy lemonade. I really can't describe it any other way. Very sweet smelling.

Taste: Hoppy up front with a nice fade to lemon sweetness.

Overall: This may be the best IPA I've ever had. Then again, I'm a stout guy.

Pale, somewhat hazy golden yellow color. Nice sized head and some serious lacing on down the sides of the glass. Very full citrusy and lemony aroma. Nice solid "quneching" burst of cirtusy hops. Again somewhat lemony but more of a general citrusy flavor. Definate solid malt flavor to round things out. None of the booziness or burn I was expecting to follow. Nice, creamy and velvety mouthfeel-along the lines of 90 Minute with an added dryness. Very enjoyable beer overall. I tried not to form an opinion on this early on, as DFH is beginning to get a tad gimmicky for me. This is very well done across the board. Seems to me it needs to be enjoyed fresh however.

Really interesting ale that's certainly worth trying if you come across it. Pours a cloudy orange color with a nice amount of foamy head.

Taste is bitter and complex. Brewed with lemons, this ale is nice in the mouth but the aftertaste is a little harsh... the lemons which provide a nice aroma transform into an almost dish detergent aftertaste.

Still, enjoyed this a lot and thinks it's a nice spin on the normal IPA/2x IPA.

Tried this one recently at one of the alehouses. Appearance is orange to maybe a dark amber. Head was about medium with some nice staying power and good lacing.
Odor was citrus first. Sweet citrus, pine, and some malt also come trough.
Taste is mostly citrus with grapefruit seemingly the main element. I also got some orange and hoppy pine. Minor malt undertones also are there.
Mouthfeel is nice. Medium body and is not heavy on the tongue.
Overall, a very nice ale! A little better than I had anticipated and carried more hops through than I though.

Appearance: orange and yellow in color with a 1" head that lingers a bit. No lacing develops.

Smell: loads of lemon zest and some hop bitterness are easy to pull from the glass.

Mouthfeel: medium bodied. Lightly crisp to start, smoother and a bit dry at the finish. Aftertaste is long as the lemon and alcohol last in the mouth for a long time.

Overall: this beer is a very slow sipper and in the end not as pleasurable as other unique offerings from DFH. Bitterness doesn't really come through as anticipated, and lemon tones are a bit too strong.

750mL bottle (bottled 2011 102 2) poured into a tulip. Pours a clear honey amber color w/ a huge thick head and almost no visible carbonation from the bottom of the glass.

Taste leads off with a lot of caramel malt and booze - coats the tongue with a warm, slick mouthfeel. Some fruitiness, definitely a bitter finish. Not picking up any lemons. 10% alcohol pretty dominant.

Overall a maltier IPA than I usually enjoy. Not a bad beer, I just like a paler malt balanced by the copious hops.

Still, good on DFH for paying tribute to a genuine blues legend.

Pours clear copper with an off-white head of a half inch. A partial skim coat for the duration with a few dots of lacing.

Aromatics lead of with pine, grapefruit, and some sweet malt. Earthy bark and caramel follow through.

Piney, resiny hops ride atop chewy malt with hints of grapefruit and earth on the palate.
A mild, slightly coarse bitterness follows through.

Finishes with a lingering bitterness, pine, and malt.

Tasty enough IIPA, but a bit heavy on the malt and lacking hop complexity and the pungent aromatics of a great IIPA.

These notes aren't too recent, but good as ever.

Hellhound pours out a heady golden orange color with a creamy white head that shows good retention. Lacing is left in creamy, heavy spotting with some patches as well and spindly legs spreading here and there.
Hops presence on the nose is almost herbal with a heavy floral bitterness at base. There's lots going on here as a bit of sweetness mellows it, lemon is evident both in a zest (rind) as well as almost juicy way. Malts add both balance and complexity with a bready backbone. Pith and light fruits add to a deep complexity.
It's a little less complicated in the flavor, as showcased most strongly are the lemon and bold hops bitterness taking over. It is a sweeter DIPA for sure, with an almost candy sweet aftertaste underneath the floral base hoppiness. Alcohol makes its presence better known with each sip.
This is a pretty big DIPA as far as the body goes. Crispness is there but the focus in the feel goes to smoothness, which there's plenty of.

Ahh, the newest of the DFH things. A beer that actually sounds interesting. Double IPA with lemons? Could be an outstanding brew. At least it's an outstanding idea.
Murky orange with chunks of sediment floating about the glass. Decent head, sticky up on it.
First impression of aroma is of caramel malt, followed by some grapefruit and lemon flavored pine-sol. Not in a bad way either.
Taste is sort of like a 90 minute to start, malt forward, balanced bitterness, with pine and citrus hops coming on at the end, followed by a very odd, slight, but carrying lemon acidity. Not a well-matched final mouthfeel to what the hops start with on the finish.
I feel like this beer could definitely work: I've had my partner's homebrewed double IPA brewed with grapefruit that was outstanding and my buddy's golden ale fermented with lemons that was exceptionally drinkable on a summer day, but this lies unbalanced somewhere along the way towards a successful homebrew experiment. Stay the course, though..I know you will.

smartassboiler, Feb 09, 2013
Robert Johnson's Hellhound On My Ale from Dogfish Head Craft Brewery
Beer rating: 89 out of 100 with 1880 ratings