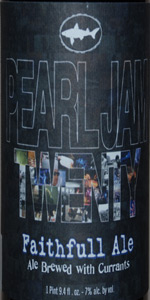 Notes: Faithfull Ale is a celebration of Pearl Jam's 20th anniversary as a band and its extraordinary debut album, "Ten." In recognition of these milestones, this Belgian-style golden ale is delicately hopped to 20 IBUs and fruit-forward from 10 incremental additions of black currants over a one-hour boil. Faithfull clocks in at 7% ABV.
View: Beers | Place Reviews
Reviews: 245 | Ratings: 725 | Log in to view all ratings and sort
Reviews by GPHarris:

a - poured a one finger thick creamy white head into a tulip glass that left a thin ring throughout. the body was a hazy orange color due to sediment.
s - fruity and yeasty.
t - yeast, fruit, slight hop bitterness.
m - thin and crisp.
o - interesting take on a BSPA but i wasn't a huge fan of the fruit in this one.

Aromas of Belgian yeast, black pepper and currants float from the glass. The fruit aromas bordering on vinous really appear more as it warms and there is just a hint of sugar.

The flavor offers a more pronounced fruit profile featuring the berry-like currants and again subtle sugars and a generous pepper kick when the beer is first poured. It even becomes a touch bready at the very end.

Medium in body with generous carbonation and a cloying finish.

I was rather impressed with this beer. True to DFH form it was not a pure example of the style but the ingredients used made for a tasty brew.

taste: DFH lost me years ago unfortunately - their experimental stuff is commendable but always seems to fall flat. the currants in this beer are found in the aftertaste, musty, bread, stale, lemon peel, spiced yeast. Sam is very gifted, but does he really think this tastes good?

mouthfeel: a bit dry in the finish, somewhat of a spoiled-milk aftertaste

Poured from a 750ml bottle into my tulip glass.

S: Slightly malty with hints of sweetness throughout. Not very strong but pleasant.

T: I actually really liked this. Very easy to drink with a nice fruity flavor to it with a sweet taste.

O: I liked this beer, but then again I wasn't expecting it to blow my mind like others may have. It's a nice easy to drink beer with good flavor throughout.

A: pours a beautiful clear gold into a DFH signature glass with two fingers of head that slims pretty rapidly to a thin skim of white bubbles.

T: currents, grapes, and very wine like. Peaches, apricots and apples make up a big part of the beer. Light citrus and lemongrass notes.

O: good beer and some amazing notes, a little to warm for a 7% and not enough hop flavors to be a great BPA.

1500th review. Figured I should make it Faithfull to celebrate this personal milestone, not because it's my favorite DFH beer (it's not) but because DFH are hugely responsible (along with a handful of Belgian brewers) in showing me the light, beer-wise. That was a long time ago now. And I remain a faithful Pearl Jam fan, so there's longevity in common. Oh, and it can't be said enough: later Pearl Jam albums like 'Binaural,' 'Riot Act,' the self-titled and 'Backspacer' are absolutely terrific. Now for the beer...

The pour produces something very lager-ish looking, like a strong Euro lager or a Dortmunder or something...just really slight of head (which is snow white) and a sunny golden/yellow color with good clarity. Head disappears quickly.

Aroma isn't promising. There's a bit of mineral/coin underneath a honey-like sweetness, a fairly limp hop personality, and a lot of white grape. But it doesn't shine. It don't shine at all...

The taste is what counts most, and we basically get a near-fascimile of Midas Touch. Has that abundant and clean white grape/raisin at the forefront, the lick of honey, and the overall breezy, easy-drinking simplicity of that elder beer. Faithfull is less sweet than M.T. probably, and with a thinner body. Slight bit of alcohol warmth creeps in, especially with warming, but 7% is never enough to threaten dominance. A lot of pear and pear juice follows in the warming. Crisp and well-carbonated, there's a nice mineral/honey/white grape character hanging around in the finish, as well as a slight hop bitterness.

Don't it make me smile? Yes, it does, but that's all it makes me do. It's nice. It's even nicer if you like Midas Touch (I do). And especially nice if you wanted this bottle for your personal Pearl Jam collection (I did). But really, Pearl Jam deserves a way better, more exciting, more complex beer, but hey, it's the thought that counts.

A - Pours a clear, glowing gold with a creamy white head that settles to a soapy cap, leaving some spotty lacing clinging to the glass as it recedes.
S - Interesting aromas of mildly fruity Belgian yeast, berries, and sugary malt with a touch of sweet corn.
T - Subdued flavors that run similar to the nose. I watched the video where Sam explained that the band drinks Pinot Noir and Corona while on tour, and that's honestly what this tastes like. Sweet malt, corn, and berries with a bit of Belgian yeast influence.
M - Fairly smooth, slightly creamy, with a medium body and decent carbonation. Maybe a touch watery.
O - A cool idea, but this one comes across a bit style-over-substance. Corona plus Pinot may have sounded like a cool tribute idea on paper, but this didn't work out so well as a finished beer.

A-Pours gold with just a bit of haze. Fluffy, frothy one finger white head that has decent retention but leaves no lace.

S-Slightly bready/yeasty with a hint of funk, a little fruity (white grapes), a bit earthy. Its not bad, but not particularly enticing.

T-Follows the nose. Bread, yeast, a bit of funk and earthiness with white wine hints. It ok, but doesn't really impress.

O-Well, I wouldn't buy another especially given the price ($12.99). I really expected more than just an average BSPA. I'm a bit disappointed.

750 ml bottle. Served in a tulip glass, the beer pours a clear dark gold color with about an inch carbonated white head that fizzled away quickly. There's a small amount of lacing. Aroma is sweet and fruity, but it's also weak. The brew smells like berries, currants, wheat/grainy malt, and some honey. It tastes like currants, wheat/grainy malt, grassy hops, honey, and some white grapes. But like the aroma, the taste is underwhelming. Mouthfeel/body is light/medium, it's a bit creamy and smooth with good carbonation. Overall, this beer is just average to me, and since I'm a fan of DFH I'm probably being generous with my rating. This was a one and done for me, I was glad I got to try it, but I wouldn't buy this again.