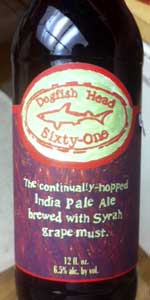 Notes: Sixty One was born at the crossroads of serendipity, experimentation and brotherhood.

Whenever Dogfish Head President Sam Calagione and his neighborhood friends gather for drinks, they give each other a big ol' man-hug and order a round of 60 Minute IPA. A few years ago, Sam also ordered a glass of his favorite red wine and poured a little into each pint of 60 Minute. They all dug the combination of fruity complexity and pungent hoppiness, and the blend became a beloved tradition.

Sixty One captures that tradition in a bottle and marries two Dogfish Head innovations: beer/wine hybrids -- which Dogfish has focused on for well over a decade with beers like Midas Touch and Raison D'être -- and continually hopped IPAs.

The name Sixty One is a reminder that this beer is Dogfish Head’s best-selling 60 Minute IPA plus one new ingredient: syrah grape must from California. The label, painted by Sam, is a twist on a typical watercolor. Rather than using water, Sam mixed the green pigment with beer and the red pigment with wine. And because Sixty-One pairs so well with chocolate, he painted the browns on the label with melted chocolate.

I was skeptical about this brew, so luckily I was able to find a single instead of having to buy four. It pours a dished out mix of amber and copper, pretty deep in hue with gazing, ruby tones when held to the light. A light, lavender head foams up big on top; creamy, chunky, and lasting for over half the glass at a substantial height. The beer looks pretty good.

I drank a lot of Welch's Grape Juice as a kid, and this beer smells like Welch's Grape Juice. A faint hint of must sits behind the grapes, kind of dry and damp woody-ish, almost like how your basement wall would smell after the window above it leaks, just before it starts to mold. Faintly leafy hop hint in the back end, but nothing takes away from those grapes.

Grapes, with a nasty, cellar-ish, old funky, weird musty off-flavor. Keep in mind, none of these descriptors are being used in the sense that they'd be used for a lambic or gueuze. It's downright nasty funk. The heavy grape flavor blunts some of the awful-ness, but this is still pretty hard to drink. Thin bodied, spritzy carbonation, weird sweet grape, funk aftertaste.

Well, my expectations for this beer were low. The look and aroma kind of redeemed things a bit for me. But then tasting it pretty much just killed everything. I don't know where things went wrong, but this was a disaster. And I don't understand how it can be labeled an IPA. It's more like a wine cooler gone wrong. A half & half mix of 60-Minute and Boone's Farm would probably taste better than this stuff.

On tap at Mr. Brew's in downtown Madison, Wisconsin. Served in a snifter glass. Pours a medium purple-brown body, one finger white head with fair retention. Some splotchy lacing disappears fairly quickly. Smells of caramel malt, toffee, strong grape juice-like character, a bit of earth and mustiness. It's interesting, but not particularly compelling. Flavour is caramel, toffee, a lot of grapes, a strange mustiness, earthy bitterness. It's a very unique flavour profile that doesn't quite fit my standard vocabulary. Mouthfeel is medium-thinner bodied with an earthy finish. I don't think I could drink more than one of these in a sitting. Overall, it's interesting but certainly is an off-centered beer worth drinking once in a while, but for me, not on the regular.

Sixty-One (61) brewed by Dogfish Head Craft Brewery, with an ABV of 6.50% This American IPA pours out a nice deep copper brown color with a small off white head. Really digging the copper color of this brew. There is a decent amount of lacing to this brew, it sticks to the side of the glass well. The smell is rich with hop bitterness, and earthy grains and malts. You also pick up on some mild sweetness in the smell as well. So far this is a nice inviting brew. Now for the taste, it is Bold with flavors. You first pick up on the hoppy bitterness, mixed with a light sweetness. Then the earthy grains and malts tie it all together. There is a lot going on in this brew. The body of Sixty-One (61) is a solid medium. There is nothing overpowering about this brew, it has a super nice balance to it. This American IPA would go nice with a dinner, or a cool spring day. The mouth feel is Bold, Hoppy, Clean, Smooth, and Refreshing. Overall I am going to give Sixty-One (61) a 4.25 out 5. I would definitely look this brew up again giving the opportunity to. Dogfish Head Craft Brewery, did a real nice job with this brew.

Well if you ever wondered what would happen if you topped off your 60 min with some wine here ya go. Its wonderful, perfect with some food or after as dessert.

T: The red wine taste is the dominant player, I get a little malty sweetness and some hops but they are background flavors

M: Very interesting, your mind is thinking wine and you get the dryness but the carbonation of beer.

O: Good beer. This is a very nice pairing of two classic drinks. I am eager to explore the food pairings with this one.

Drank from the bottle so gave it slightly above average 3.5 looks since its a DFH brew. Kind of hard to smell from the bottle, but inhaled enough to state it's very musty with more yeast and cracker than hops; some very mild spices come through, but it's really musty and fruity smelling which seems sweet overall. Tastes old, best way to describe it is like a lager sitting too long in your grandfather's fridge or a fresh beer with green grapes that turned brown and started to rot. After that initial flavor there is quite a bit of malty biscuit, graham cracker, chalky yeast, mild floral hops and light spices like coriander and pepper. It's almost like the base beer wants to jump through the suppressing grape must, but just can't make it through. Barnyard funk and frost brewed vegetables seem to sweep through at the end to just make it confusing. This was a nice light beer with mild carbonation, a medium body and a slightly bitter finish that was pretty dry....however, it was so far removed from the classic and delicious base beer that it had to be a disappointment. It's not a bad beer, just a letdown to me since its a Dogfish Head and I thought the added fruit would make for a more dynamic 60 Minute. Oh well, I tried it.