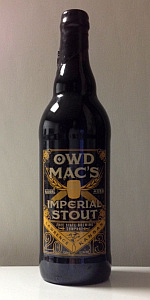 Incredible. This beer smells so boozy and yet it is incredibly smooth. For the high ABV you'd never know by tasting it. So roasty and there is tons of dark fruit to balance it out. Worth seeking out.

Was fortunate to get my hands on a bottle of this thanks to the generosity of a friend who isn't a BA, but is certainly a beer advocate. Enjoyed out of a brown 750 mL bottle with a waxed neck and crown. The silkscreened label denotes "2013", which confuses me, as the bottles were released in November 2014 and the beer purportedly spent 2 years in Templeton Rye barrels, meaning it would have been brewed in 2012 (or maybe early 2013, I suppose). Oh well--I poured this beer of mysterious dating origins into an oversized brandy snifter.

Appearance (4.5) - A moderately aggressive pour yields about a finger of beige dense-bubbled head. It doesn't last very long--maybe 30 seconds--before fading away to come to rest as a ringlet around the edge of the glass with a smattering of film across the surface of the liquid. No lacing outside of a mottling of isolated spots--more legs than lacing, really. The body is pitch black, with just the barest suggestion of a dark burnt wood brown at the edges of the mass of liquid.

Smell (4.0) - I have to admit, the smell isn't as intoxicating and pervasive as I hoped it might be. There are subtle hints of caramelized fig, baker's chocolate and vanilla overtones, but the dominant character of the aroma is certainly rye whiskey--or really, the astringency of whiskey in general. The more complex aromatic profiles are in the background, initially giving me pause that the year I've waited to open this was still not long enough and that I'm about to take a drink of a boilermaker. In fairness, however, as room temperature begins to take hold, the astringency fades and the sweeter, richer profiles make more of an impact. Still...

Taste (4.5) - ...it should be stated unequivocally that the star of this beer is the taste. My initial misgivings about the aroma are utterly destroyed upon my first sip. All of the muted characteristics from the smell--dark chocolate, caramelized fig, vanilla are much more prevalent, but now have the augmentation of other flavor profiles: sweet coffee bean, cocoa and even some richer suggestions of dark fudge. The sweetness of the taste is a nice yin to the yang of the less overt aroma. Once it hits room temperature, there is also some definite suggestion of port wine. But really, I think what makes this beer for me is the heightened vanilla profile that so often accompanies rye whiskey--especially Templeton.

Mouthfeel (4.5) - This is moderate-to-low on carbonation and it has a nice full mouthfeel. I'm a bit surprised given how long it spent in the barrel. This must have been one chewy SOB before it got placed in barrels, because it has retained a great, full mouthfeel in spite of all that time. The finish is semi-sweet and the viscosity lingers on the back of the tongue after the beer is long gone.

Overall (4.5), just an outstanding beer from Free State. With this kind of adept showing at barrel-aging, I would love to see them take a crack at putting Old Backus in some kind of barrel. I've been told this particular beer was pretty hot right out of the gate, but with about a year to sit in the bottle, it has become a masterful marriage of the best characteristics of whiskey and imperial stout.

Aroma is quite pleasant with some rye whiskey, bangload of roasted malts, hints of coffee, dark fruits, and some tobacco. Very enticing. Flavor...wow! Picks right up where the nose left off. An incredible balance between the barrel and charred, caramelized, sweet malts. Wave of decadent chocolate hits you at just the right time. Each sip gives you a new experience. The feel is very impressive. Creamy and coating without any boozy burn.

Just an impressive offering from a brewery that I usually find their offerings uninspiring. This is world class level. Some similarities to BCBS without quite as much residual sweetness.