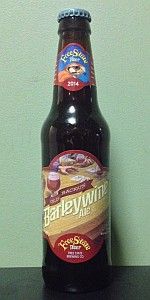 Old Backus contains just over 2,000 pounds of malt and 55 pounds of hops. The original gravity is 25.6 P/1092 which contributes to an alcohol content of 10.5% by volume. This is a tremendously complex beer that should be savoured slowly and in moderation. It will continue to change with age as it is served unfiltered.

This barleywine is named after Richard Backus, an old friend to the Brewery.

Plum and raisin sweetness are balanced nicely by spice and bitterness from the hops. Carbonation is perfect for the genre. The fuller body and higher alcohol content distinguish it from its West Coast cousin, Anchor Brewing’s Old Foghorn. That said, given the more pronounced bitterness of Old Foghorn (at least in the 8.2% ABV version to which comparison is made), I think both qualify as British Barleywines.

Drink this if you want more body and less bitterness. For more nuance and bitterness, Old Foghorn’s lower ABV iterations May be a better bet.

Bottle as part of a 4 pack. Currently the #1 beer in Kansas:

No overt hop notes or off-notes. Not quite dialed-in balance-wise.

Mouthfeel is a bit gooey, certainly thick & full-bodied, and a biteen chewy. Smooth and wet otherwise. Unrefreshing but not boozy.

I don't find it to be a very great barleywine even compared to your typical always-on-the-shelf barleywines from other states. Best beer in Kansas? Not in my book...but even if it were, respectfully - we're still talking about Kansas.

2015 bottle has held up really well. this is a nice barleywine, not overly complex, not barrel aged, not trying to do too much, just a good old fashioned strong ale that is perfect for the late fall and early winter stages of the year that we are in now. deep reddish amber color, frothy tan headed, bubbly for the style and its age. the aroma has a little wet cardboard oxidation, but i always think that flatters a barleywine. the hops have held up, or else this was insanely hoppy when it was fresh, it still has a nice piney and orange peel character to the aroma, and plenty of bitterness as well. caramelized and long boiled grain sugars, a light maple or brown sugar note, and a warming booze nose. the flavor is the same, but its just so well integrated all of it, the hops are not just in the finish but all the way through, and the malts are rich without ever being sugary to me. the age has helped this mellow i would think. its warming but not hot on the alcohol and has a long bready finish, very much a barleywine of the old school, but but a beer i really enjoyed in this seasonal context. i hope to be able to try it fresh sometime...

(Written Aug 4th, 2015) 12OZ bottle, 2014. Not much carbonation when opened; poured with a very light head, but I really like the color of the head: light caramel; beer somewhat cloudy at first, then cleared out to a very nice caramel color; strong aroma of bread; taste is heavy sweetness (But not cloying), medium bitterness, and some sourness; soft carbonation, sticky, medium body. Overall, I like it, but perhaps not as good as some other barley wines I have had? I look forward to seeing how this will age.

Appearance - The beer poured a deep copper color with a bright white head.

Taste - At the front, I detect sweet caramel, bread, amaretto, fruit leather, and ginger The overall profile is well-balanced as it not overly sweet and no taste profile dominates. The experience is completed with a pleasant warming sensation

Mouthfeel - Low carbonation and a syrupy texture let this linger.

Overall - For the style, this is near perfect.

Free State is the best, period.

(I will review this properly another time)

Reddish-brown with a bubbly tan froth. Smells of gum and cherry syrup. Tastes of plum, black grape, burnt sugar and pine. Has a sickly sweet aftertaste. Syrupy and even medicinal in spots. Medium in body with a touch of alcohol warmth.

I get the history of this one, and have nothing but respect, but it's really not working on any level for me, and ain't nobody got time for that these days.

Old Backus pours a copper-orange mixture with a smallish 2 finger head. Opacity is about 70%.

Aromas start to lift as the glass is agitated, I'm getting a lot of grape skins both black and globe. Resinous and viney qualities are very present, as is a large body of toffee and caramel malts. Some fresher aromas are released as the snifter is agitated further bringing forth snap pea and dry grass.

Barleywines are no joke and this is no exception. Flavor impacts like a fiery comet into the core of your palate. Some aged and spoiled alcohol are first sampled, followed by tons of grape skins soaked in the stuff, tasting like someone popped the lid on a forgotten barrel of whiskey at the bottom brink of a pirate ship. It pretty much stays there except for a thick slop of toffee malt backing. A sharp note of hop finishes the profile with a stinging character.

Feel is thick and destructive, but doesn't completely devistate, more like bends your tongue a little bit much like a tree in an F1 tornado, then passes by and leaves a trail of dust and dryness in the air. More "sessionable" (excuse me, if you will) than other BW's.

Overall, Freestate's offering isn't bad, but it's not among the best I feel. It could have more variety in the flavor, and a little more synchronity with what's there, but it's still an enjoyable brew nevertheless. Probably won't return soon, but it's worth a try if you haven't had it.