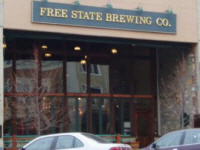 Reviewed by marc77 from California

4.15/5  rDev +0.7%
vibe: 3.5 | quality: 4.5 | service: 4 | selection: 4 | food: 4.5
The beer at Free State is consistently good, with some of their seasonals being superlative. It's got a bit more of a restaurant - type atmosphere than a local brewpub, but if the brew is good, one can't complain. It can get a bit crowded at times. The food is easily well - above average for a brewpub, being well beyond greasy brewpub fare (though they have that too) Some dishes are delicious. The service is prompt, courteous and gets the job done. I highly recommend this place.
Apr 08, 2002
More User Ratings:
Rated: 4.25 by atlbravsrno1 from New Hampshire

4.26/5  rDev +3.4%
vibe: 4.5 | quality: 4.5 | service: 4.25 | selection: 4 | food: 4
Large brewery with lots of seating located off of the main strip in downtown Lawrence. Exterior is reminiscent of an Irish pub, with ornate woodwork and large windows. Inside, the woodwork continues, illuminated by natural light from the front windows and lots of lighting otherwise. This space feels organic, not curated for Instagram posts or some new-age interior design - it's comfortable. Seating is available all over, between several rooms. Space is well kept and clean, as is the glassware. Service is good, working well to pair beers with meals. Selection spans their own brewed beers, which tend to be a little bit more old-school in their styles. Styles lean much more towards the sessionable and social beers rather than heavy. Food is good as well. Kid friendly. Fun space to visit on Massachusetts street either before a concert, during a visit to the college campus, or simply a mid-day stroll up and down Mass street.
Dec 09, 2019
Rated: 4.1 by Manthon from Pennsylvania

Reviewed by The_Epopt from Texas

Reviewed by JISurfer from South Carolina

Reviewed by KSBlacksnake from Kansas

Reviewed by DelMontiac from Oklahoma

I entered Free State at around 5 pm after a stroll downtown. The place was already in full swing at the smallish bar which was full with people standing around it chatting with glasses of various shapes and sizes in hand. The fermentation tanks and all the workings are behind a glass partition next to the bar - typical kind of thing. There are tables outside for the smokers. Don't dig having to walk through the smoke at the front door, but also pretty typical for a downtown sidewalk venue. There is seating on two levels, upstairs giving you either a nice view of the patrons, bar and brewing below or a view out the large windows to the street. Not a large establishment, but very nice and airy.

I was seated up stairs immediately by a friendly hostess and a young waitress took my beer order for an Oktoberfest as I looked over the menu. Very impressive menu. I love a good reuben sandwich, so I kept with the Oktoberfest theme. The beer was fantastic. I also tried their Lovejoy IPA which was nice too. Sandwich was grilled a bit too crispy according to the roof of my mouth later on, but still good. The real star on my plate, however was the potato salad. Best potato salad every...stuff of dreams. I'm not kidding.

After 3 beers, the reuben, potato salad, pickles, and two of their Belgian style short tulip glasses, I only spent about $27. Not bad at all! So for the money, it's five stars in that category. I mean, I've spent that much on 4-5 beers in other brewpubs.

I will definitely go back to the Free State pub. I've been drinking their fantastic beers for years and they're even better in person. Even if you're in the Kansas City area, they're only about 30 miles away. Go check 'em out!

Reviewed by professorpint from New York

4.5/5  rDev +9.2%
vibe: 4.5 | quality: 4.5 | service: 5 | selection: 4 | food: 4.5
Stopped by Free State on a Thursday and liked it so much that I came back the next day. Friendly bartenders and regulars create a positive vibe of camaraderie that is very welcoming. Had the limited release Yakimaniac IPA and was very impressed. The food is above average pub grub with some creative vegetarian options. Picked up a 4 pack of the Cloud Hopper Imperial IPA which is excellent. Honestly wasn't expecting much from a brewery in Kansas but Free State crushed it, and Lawrence was actually a cool town with a kick-ass record store and multiple book stores.
Aug 14, 2015
Rated: 4.42 by SCW from New York

Reviewed by lovegarden from Kansas

4.65/5  rDev +12.9%
vibe: 4 | quality: 5 | service: 5 | selection: 4 | food: 5
Free State is one of the best breweries in Kansas. Located in Lawrence, Kansas, they offer only their own brew, and they usually have a wide variety. You can also get their beer at stores around the region. My two favorites are their Old Backus Barleywine and Oatmeal Stout.

Free State has excellent food, and I have never had a bad meal at this establishment. I recommend their fish and chips or their Sonoma Shrimp Fettuccine.

The atmosphere is great, but it can get crowded. Check out their website and use their text ahead seating.

Rated by Wendt from Missouri

Reviewed by rwhitmore from Kansas

They only serve their brews, there's usually a range of styles to choose from. Servers are generally beer-knowledgeable, and many are very good at discussing the beers in depth.

The food is uniformly very good, and some dishes are always great. My only real beef is the inconsistency of the Pastrami Reuben. I LOVE a good Reuben, and when they do it right, it's wonderful. However, it's sometimes under grilled, and doesn't have that great crispy exterior I want in my Reuben.

If you're in the Kansas City area, take the 30 minute drive to Lawrence and put the Free State Brewing Co. at the top of your list. You'll like it a lot.