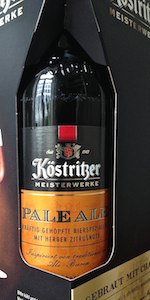 16.9 oz. can.
Label states 7.0 % abv.
Moderate pour yields a one plus inch off white head over a bright amber body with sticky lacing. Nose of light brown bread, slight pine, and wet leaves. Taste starts slightly sweet and finishes nicely bitter with the malt present throughout the experience. Good feel and overall, a very enjoyable offering from this schwarzbierbrauerei and would definitely recommend. Cheers!

On Tap at Old Europe (DC). Well-balanced and very drinkeable with both new world and old world characteristics coming through (especially the malt backbone).

Pours a slightly hazy, deep orange coloration with a medium, fizzy head. Smells of bready, caramel malts and grapefruit, with just a hint of pine. Taste follows the nose with a firm bready, caramel malt backbone balanced very nicely against citrus hops: grapefruit, tangerine, pine and a light, crisp bitterness. This may not be anything special, but it's a really, really solid and pleasant Pale Ale that represents fantastic value. Beats the shit out of Störtebeker Pale Ale for sure, even though they do go in kinda different directions. Too bad you can't actually buy it anywhere anymore...

On tap at Wolff's Biergarten in Albany, NY.

This one pours a mostly clear orange, with a small head, and lots of lacing.

This one smells like orange, pine, tea, pilsner malt, and grassiness.

This is suprisingly pleasant, I didn't really expect a pale ale from a German brewery to be all that impressive. It's got a nice creamy and pleasantly hoppy flavor, with a kick of citrus- orange and grapefruit, with a big grassiness, and a sturdy malt backbone.

This has a pretty crisp mouthfeel, and a nice foamy creaminess. It's very drinkable.

This was a nice little surprise- very tasty.

Hazy amber color, very persisting head. Smells quite good, of well balaced citrusy hops and (wheat?) malt. Taste is a slight disappointment in comparison, too much sweet malt and not enough hops aroma, though the bitterness is quite pronounced and lasts (too) long. Still one of the few decent Pale Ales from larger German breweries.

From Corte Ingles, 75 anniversary feria. In Bavaria glass. Reading CSHTP6 Ch7 & Playing South Park Stick of Truth. Good nose that promises more than the taste gives, but still fine. Some fruitiness from its hops and a subtle tartness

Clear orange color with beige head. Aroma has some fresh, floral hops along with some sweet malts and honey. Taste starts quite balanced with the malt being a bit more accentuated but in the middle some weird off-taste appears. It's somehow bitter and medicinal, like an aspirin. It's not that intense but it spoils the overall taste a bit. Body is medium-light and well carbonated. Overall it's a well made pale ale, if it just wouldn't have that weird aspirin note.

The pour features a reddish amber color with a touch of haze. The head, while small, lasts forever. It leaves some substantial spotty lace.

Smooth pale to crystal malt smell. Very attractive without a lot of hop. Creamy with a bit of caramel. A little bit sweet.

The flavor is a nice blend of toasted grains and sweet cream. The hop, althoug subtle, is an important contributor to the overall flavor. The finish is a decent blend of the two competing elements of malt and hop. The malt wins out with a smooth, very creamy finish.

S: Initially there wasn’t much to report, as the beer warmed hints of citrus and farmyard funk came through.

S:
-lemon,orange,grapefruit,mango
T:
-Follows the nose
-medium bitterniss
O:
You won't believe it but this is a damn good IPA by a german macro brewery

Surprisingly, for a German Fernsehbier company (Kostritzer belongs to the Bitburger Gruppe) the Pale Ale's ingredients are listed on the box above and on the bottle.
Ingredients: Pils, Münchner and Caramel malts, Citra, Delta, Hallertauer Blanc, Galaxy and Calypso, and of course water and yeast. Impressive list of malts and hops, and it's clear from the malts that this beer is more in a German direction. I've never heard of Hallertauer Blanc or Calypso, so I'll have to do some research later to find out more about them.
Anyway, maybe by listing the ingredients, they're trying to give themselves street cred for being a Craft Brewer.

Appearance: The influence of Münchner and Caramel malts are obvious in the color = very deep amber with hints of red, which would the perfect color for a Märzen, which from the malt bill is what it looks like. It's sitting under a huge white head that takes more than 10 minutes to get the liquid level, snow white and fine bubbles. Nice looking beer.

Aroma: Mmm, nice. Typical Citra smell! I get grapefruit, mango, a little pine, caramel and a hint of Pils malts, but it's not as strong as I'd hoped. The aroma is stuck deep in the glass and I really have to breathe super deep to get it out. Though the aroma is wonderful, being weak is a sign maybe it wasn't dry hopped much or enough or long enough.

Flavor:
Front: lots of tartness and some decent bitterness, not a Noble Hop, but more a Cali bitterness, heavy on the tongue. I also get a deep dark fruity flavor, almost a burnt caramel flavor, that's near mango but not as sweet.

Mid: Lots of bitterness here and the same fruitiness combined with tartness. On the sides, you could imagine you're drinking a Märzen if you ignore the hefty bitterness.

Back: more of the same, and very flavorful. The hops are present in the fruitiness, a little pine, mango, but also lots and lots of caramel and some Pils malt hiding inside there, too. This is a good beer.

Mouthfeel: Nice and thick the way you'd expect a well made German beer to be. It feel more like a German than a British or American beer, for there's no dryness or thinness to make the beer anything less than a nice German süffig Gemütlichkeit feeling. You don't feel the higher alcohol *6.4% at all in the mouth, but you feel it later when you've finished the bottle.

Overall: This is a very good beer! Except for the aroma, I would give this beer across the board 4.6. It's a wonderful cross between a Märzen, a Pale ale, and an IPA, but a really wonderfully malty one with lots of caramel and sweet qualities, but also the weighty bitterness and fruity elements you'd expect in an IPA. It's neither overly bitter nor over fruity, nor overly sweet caramelly, yet it feels like there's a lot of each of these elements swimming together to mix for a heavenly balanced beer. Like I said before, without the demerits for a weak aroma, it's a 4.6, but with that weakness taken into account, it's only a 4.3.

Pale Ale from Köstritzer Schwarzbierbrauerei GmbH & Co.
Beer rating: 86 out of 100 with 39 ratings