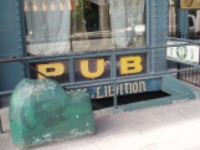 Make no bones about it, the Dubliner is a college bar, but it's one of Omaha's oldest pubs, and one of the ones with the best character. Sure, there's the Crescent Moon that has a great beer selection and good service, but that's way up the street, and in such a college town, there's not much else around in the old market.

So the Dubliner... it's downstairs, and the main bar is separated from an area where they have music. It looks and feels cellar-like. Fortunately, it smells OK.

The tap selection is pretty good, and it includes a fair amount of local brews. There's nothing special, but at least it's not all crap.

I've never had food there, and to be honest, I don't remember them having food. ???

But the service is good - at least quick - and a few recommendations are always available during daytime hours before it becomes a big college mess.

Worth trying? Maybe, maybe not. I'd put it right up against Old Chicago as they're a chain, and if you've been to one you've been to most - and this at least has some style. On the other hand, it's not a beer mecca by any stretch.

This past Saturday went at around 10:15 PM. This one is a smoking bar and coming from Colorado I have gotten used to no smoking so it was a bit of a change. Downstairs pub which feels very cellary - which I find charming.

Having a cover at a normal bar with some light live music seems a bit ridiculous as the guy playing somewhat nontraditional Irish music was far from professional. Nevertheless I paid and it was fine.

This Pub has two places to get drinks: one long bar at the entrance and another shorter bar inside a bit. Each time I wanted a drink I waited no longer than about a minute for service. They have pitchers of the Mega stuff for those inclined and plenty of bottles/Cans for the better of the sessions beers: Celebrator, Boddingtons etc...Drinks are reasonably priced.

Overall the atmosphere was good and friendly with a mix of ages and types of people. Omaha seems to be packed with the "former frat guy now business chump" so be prepared to see a lot of that. They also have a free popcorn machine if you are so inclined - perhaps thats why they charge a cover.

Overall I wasn't totally impressed or excited about this bar over most, but with a nice group of people it could be a lot of fun.

Update: The tap list has lost something, more BMC and few noteworthy craft beers. The bottle selection is solid but it is hard to trust the quality.

I will visit this place again in a couple months; if the tap list still sucks it will no longer be in Beerfly.

The Dubliner Pub has its charm. This below ground level pub is located on the outskirts of Omahas Old Market. The décor is brick walls, wooden floors, and wooden rafters it is rather dark inside and often hot. The bar is situated to the left as soon as you walk in the door. Often there is a $2.00 cover charge, no big deal as the prices for draft beers are .25c - .50c cheaper than most places. Speaking of prices, they are listed on the tap-handles, a brilliant idea! Speaking of taps, they have around 12-14 taps. Boulevard Wheat, Fat Tire, Warsteiner, Guinness, PBR, Pilsner Urquell, and Shiner Bleak are the only non-macro American Lagers. There is a cooler of beer with a listing of everything they have, which includes some very solid British and German beers and a few other dandies. The micro selection is very limited but there are a few good craft beers (New Belgium, Boulevard, Sierra Nevada, Anchor). However I am leery of the bottled imports, I never see anybody drinking them. How old are they?

Seating is plentiful. There are two dartboards, a jutbox and a couple TVs. It can get kind of loud conversations can be difficult. Bathrooms are small and tucked away.

There is another section of this pub with a second bar and a stage for live music, poetry and such, but I have never stepped foot inside.

They do serve food, which is catered in from the Brass Grill, which is above them. Ive never tried it.

I have good help and awful help. The bartender (if it is a bald guy with a baseball cap) is really nice others can be clueless. Ive gotten the wrong beer too many times.

The Dubliner is good enough for a few beers every now and then. Sometimes the crowd is full of drunk-ass kids. But if you are barhopping in downtown Omaha and you want a good beer, visit here.

After perusing BeerFly, and with the limited time I had to see some of Omahas finer BeerFly establishments, I decided to try the Old Chicago on Harney Street which is close to the Old Market area. After parking, I noted that the Dubliner Pub was also close by, a name I remembered from my earlier searching and as it was just a couple of blocks and a short walk from the Old Chicago, I figured that it was worth a try.

First off, dont make the mistake I made and actually go in the street level entrance, this is to the restaurant portion called the Brass Grille, and this only serves one draft beer (a Wheat) and whilst it has a nice interior, it basically sucks beer wise.

You need to head down stairs to the underground entrance; a cheeky chappie told us that the entrance fee was $2 because of the turf men. I wont repeat my response here but we decided to give it a go anyways.

Sure feels like youre in a Cellar bar, lots of exposed stone and brick walls, wooden fittings and some old bric-a-brac. The Bar runs down the left hand side and is decorated with about 14 taps. Nothing outstanding in the way of good beer, lots of macros and imports. A small bottled beer range makes up the selection but it seemed that everyone here was drinking draft beer. As such I stayed with the same, putting the rather high proportion of macros aside I made a tough choice and opted for the Fat Tire Amber  either this beer has changed drastically since I last had it, or the lines needed cleaning. A very unsatisfactory beer situation indeed.

Service was random and sloppy, I f**king hate it when they put your change into a large puddle of beer as well, that's just ignorance and very annoying.

It was a Friday, busy and quite loud, but somehow I couldnt relax in here and felt pissed at myself for detouring and bringing my work colleague here. It was a very short stay and the beer was not finished.

I knew it was a mistake coming here! Serves me right, I usually never pay to enter any establishment. I'll do well to remember that rule again in future.

A below average beer bar for my liking. So avoid my mistake, give this one a wide berth, save yourself $2 and head straight for the nearby Old Chicago if you want good beer!