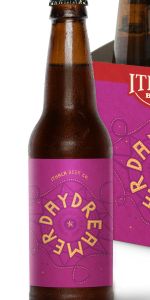 Notes: Originating from Cologne (Köln), Germany, the Kölsch style is historically only brewed along the Rhine (Rhein) River. The style is so regional that Germans in other parts of the country may not even be able to get it. We brought the style here and added our own little bit of personality by making the traditionally 4.5% alcohol beer closer to 7%. This full flavored dreamy Kölsch will stand out from the rest with its strong pineapple-like aroma and complex fruity flavor.
View: Beers | Place Reviews
Reviews: 34 | Ratings: 123 | Log in to view all ratings and sort
Reviews by ogman:

Poured from the bottle into a Gaffel stange glass.

Fluffy bright white almost three finger head that settles nicely, a bit soapy to fine bubbled appearance wise. Body color is a bit darker with a big brass and almost chestnut brown hue to it, slightly hazy a bit and cloudy, but with a good amount of nice carbonation as well. A pretty nearly solid looker in the appearance department.

Heavily ester forward on the nose, hints of fruit and white large grape. Sticky and pasty smelling, perhaps a little bit of florals dropping in but also a bit of bile creeping up as well. Definitely got some Kolsch yeasty ester action going on but it's going close to overboard, and there's not much chewy malt density coming off of this or much of anything else.

Palate derives very much from the nose. Fruit forward quite large surprisingly in the mid palate. Lots of washing blueberry and other fruit juiced like quality. Moderately carbonated wit a simple malt depth that stays out of the way but doesn't really come with a lot of chewy density, more of a neutral feel. Finishes with lots of white wine grape quality, and very clean, if a little steely fruit tasting but not totally metallic.

An interesting decent beer, but only has one part of the puzzle it seems. Really wishing for some classic malt character, but it's hardly even noticeable through such a large fruit forward brew. Drinkable though and easily refreshing.

Served cold into a stangeglas at high atitude in Castle Rock, Colorado. Reviewed live as a kolsch per the label.

HEAD: About 3-4 inches wide. White in colour. Frothy. Leaves no lacing on the sides of the glass as the head recedes.

Appears well-carbonated. It's a nice looking kolsch, but doesn't hold up to the best offerings in the style.

A pleasant but simple aroma of average intensity.

Suggests no booze or off-notes.

TASTE & TEXTURE: Pilsner malts, crisp clean barley, light floral hop character, and a bit of alcohol (the latter of which definitely isn't to style). It's clean, crisp, and somewhat refreshing, but the balance isn't quite dialled in and it's not gestalt. In going for a higher alcohol kolsch with more hops, they've stepped on the fundamentals of the style. I'm not liking this much.

Overcarbonated. Medium-bodied where it should be light-bodied.

OVERALL: Drinkable but underwhelming. It's not bad for an American stab at a Kolsch, but it pales in comparison to great traditional versions of the style. Not Ithaca's strongest work by any means. I wouldn't nab it again.

Pours a golden color with an off white head that trails the glass. The smell had a bit of honey and caramel to it. Very enticing. The flavor was nice with baked bread flavors mixing with the caramel and honey giving a hearty yet well balanced beer.

Surprisingly good. Definitely a lager but with lots of light floral and tropical fruit aromas; a mix of overripe grape and banana. Good taste, but heavy on the alcohol with a finish that feels overly dry and grapefruity to balance the earlier robust and juicy floral/tropical flavours. Overall tasty but conflicted; could be toned down a bit to shine on the flavourful lager-ing and accompanying bright bouquet of flavours.