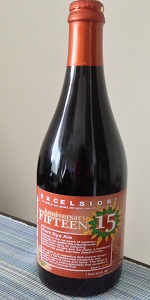 A: Pours a very dark brown with a big effervescent tan head. Head fades slowly, leaving a wonderful thin spiderweb of lacing everywhere on the glass. Great retention too.

S: Wow, very interesting aroma. It's tropical fruit and spicy rye at the same time. Unique combination. Spicy cloves in there too? Strong spiciness in general but the tropical fruits temper it a little.

T: Again, very spicy up front. Spicier than even most other rye beers. Lots of sharp rye and cloves. Mild tropical fruit here, not as strong as in the aroma but still present. Touch of sweetness and then a decent wave of hoppy bitterness in the finish. Lingering spicy rye and just a touch of that nice tropical fruit in the aftertaste - quite drying while we're at it.

O: Very nice rye beer. Very spicy, possibly the spiciest rye beer I've ever had. And I've had a bunch. Definitely a must have if you appreciate that aspect of these beers. There is just a smidge of sweetness and a little tropical fruit hops to balance complement the flavor but it's mainly the spicy rye and cloves. The spice and hop bitterness in the finish can sometimes make for quite a drying hit but it's not obnoxious. Delicious and unique, I enjoyed it.

Pours into a a cylinder a murky amber brown color with a fluffy light tannish colored head that leaves one and a half rings of broken leace as it settles into a frothy mass.Yeasty spiced phenolic notes mixed with sharp caramel toffee and nuttiness,there is a dry spicy hop note in there as well.Light phenols and medicinal notes upfront on the palate than a big drying earthy/ leafy hoppiness rushes late giving a spicy finish,the rye is there giving off spiciness and light lactic notes.The alcohol creeps a little but the complexity of this beer makes it very drinkable even for someone like me who is not a fan of the phenols.

Notes via stream of consciousness: So this is 5 years old? Let's see how it's held up. It's poured a slightly hazy dark chestnut brown body beneath a finger-thick head of dense tan foam. It was originally unfiltered but I'm sure it cleared by now, it's just that I disturbed the bottle. Held to the light there are some orange and golden highlights coming through. In the nose it's malty, darkly caramelish, and spicy from the rye. There's also an orange-like fruitiness in the background. I'll assume that's from hops, and that they're not as strong as they once were due to its age but I'm not sure, I never tried it fresh. On to the flavor... very nice. It's got a rich maltiness that reminds me of a bock, and there's plenty of dark caramel, but there's also plenty of rye. I'm surprised that it comes through so clearly in both the aroma and flavor. I'm not picking up any oxidation, at least not the papery/cardboard type, and if it's increased the perception of the maltiness I have no way to tell. A smooth but firm bitterness balances it and it doesn't seem sweet, and at the same time it's fairly spicy which I'm guessing is coming from both the rye and hops - it finishes with some residual caramelish malt, spiciness, orange-like fruitiness, and a little bit of pine and earthiness. At 8.4% I'd think that maybe some of that spiciness is coming from alcohol but to be honest I'm just not finding it anywhere other than that it gives the general impression of a strong beer - you know it's there but it doesn't stand out. In the mouth it's medium bodied and creamy smooth with a very fine-bubbled, natural carbonation that just lightly tingles on the tongue. Looking back, the head help up quite well and there was some nice lacing left behind. Given the amount of malt that's there though, and the fact that it's just 8.4% alcohol as opposed to 10 or 12 it should probably have left more lace. That's pretty much the only fault that I can find with it, and overall it's quite nice as it is. I'm really surprised it's held up as well as it has but I don't see it lasting much longer.
Review# 6,621

alysmith4 from District of Columbia

A: Poured from the 750 ml capped bottle into a Piraat tulip-snifter type glass. Body is the color of black cherry soda, with a half-finger off-white head. Decent amounts of lacing on the glass.

S: To be honest. . . I don't like the nose. Cloves and rye spice are both evident, and IMO don't play well together scent-wise. Seems to create a slight sour milk smell. After I get past that, I'm getting rye spice, cloves and a Belgian-like yeastiness. Bubblegum perhaps.

T: Tastes come together better than the nose - substantial rye spice. This isn't a rye beer where you sip it and think, "Geez; how much rye did they really use in this one?" The rye is noted. As are the cloves, some dark fruit (think ripe cherries) and then a good amount of hop bitterness at the finish, splitting off from the spice of the rye. Phenolic Belgian yeastiness as well - reminds me of overripe melon to some degree. After a few sips, this grows on you.

M: Medium-to-full in heft. Modestly sharp in carbonation, but not offensively so. In fact, it may help to wake up the taste buds to all that's going on with this beer.

I picked this up at Brass Rail Deli, shared with tenderbranson69 enjoyed chilled in a goblet.

The color is deep brown like coffee with opaque clarity thick rocky head with pale tan shade with fine bead lace stick thickly inside the rim of the glass. The smell has a light earthy nose, slight fruity mildly citrus and tropical with subtle yeasty medicinal ester. The feel is great, very nice balance of sweet malt with creamy body and medium carbonation with subtle spice from the hops and mild alcohol in the finish. The texture of the yeast adds to the wheat smoothness in the malt body with a little residual sweetness in the finish.

The taste is good with some mild spice and toasted flavors up front with a tangy tropical fruit from the hops with light yeast tanginess and some hints of gentle dried fruit flavor with a hint of coffee and pine in the background. The yeast adds a weird phenolic tinge which seems to hint at hefeweizen with a clove almost mincemeat with nutty and fruity combo of malt and hops with some spice and caramel toward the end. Overall this is a hard beer to nail down not a truly cohesive taste..it has a mix of ingredients that seem to come at you at various directions on the palate somewhat intriguing yet it doesn't really meet the expectations based on other Excelsior beers I have tried, very good but not great.

750 mL bottle. Deep brown. Smells of cardboard, sherry, rye, and caramel malt. Tastes of rye still. Grainy brown bread once the oxidation subsides a little. But the oxidation lingers into the finish. Medium heavy. Way too old, but still decent.

This looks like a really interesting beer, hopefully not too old, with no date, but I don't think it's too old as sixteen isn't out yet and I think I got this a couple months ago.

Nose is actually pretty bad... ick, probably older than I thought but it shouldn't get this bad until like 4 years. BBQ sauce and ketchup at first, a big vegetal soy like not so nice aroma. that eventually gives way to caramel and brown sugar, candy like with age, as it starts to open up some mild rye components, amber toasted malts, brown malts, etc, with hints of herbal earthy hops big toasted malts and some estery booze.

Taste brings sweet candy smooth creamy malts, brown malts with a creamy feel, with some brown sugar, caramel, candy syrup, etc, and plenty of toasted brown almost biiscuit like notes. It again gets some of that vegetal BBQ sauce ketchup thing going for it, but not a ton. Some sweetness with candy tastes lead to a bit of warming booze, and some esters, which is probably what leads that BBQ sauce thing. Bitterness catches up eventually, a semi bitter spicy earthy hop thing, wih a mild kiwi like terroir note, but not really any fruits or tropical notes, and some fruity rye flavors, just a touch spicy. The weird yeast additions bring mild phenols with those previously mentioned esters, and touches of baking spices. The big spicy hops really come through on the finish with fair bitterness, bit more vegetal BBQ sauce and ketchup almost soy like thing lingering, sticky syrupy notes, and more phenols and booze.

Mouth is sticky syrupy, some warming booze, lighter carb even esp for a bottle conditioned beer.

Overall blech! really sad at this, drain pour I can't even finish my glass let alone the whole 750ml! This beer was a horrible mess, can't be that old, but seems like it's a 4 year old beer. Big sweet candy with that messy soy and icky BBQ ketchup sauce thing, even the hops were pretty meh that didn't jive well with the sweet candy mess, and weird yeast additions like spices, esters, and phenols. This beer really didn't have anything good going for it, heck even the rye was muted and a weird fruity rye note instead of a nice spicy out front rye. I really haven't been liking the last few Excelsior series beers, so not sure if they're really streching with them, or just went down hill. But ewwww!

Sweet pine and banana give way to light rye and rubber band. Earthy with cloves, this one is quite complex, albeit, confused and pleasant.

Caramel and caramelized sugar open with light bitterness. Rye bread develops with warmth as does a light sourness. Spice and smoldering smoke give way to raisin later in the session.

Fifteen has a full body and almost creamy texture with light carbonation. Alcohol is present but subdued. The finish is dry.

This one has an abundance of character and is quite interesting. One could easily finish a couple of glasses with lively conversation. Enjoy with good friends while eating a variety of sausage or pizza.

3.75 A: Black color. Two fingers of frothy beige head. Retention is about average and a 1/2 inch ring of lacing is left.

3.5 S: This sure is interesting. Oddly the first thing that stuck out was a sugary, dried pineapple aroma. Earthy, spicy rye. Hops offer a mix of herbal, tropical, and earthy notes. Plum, currants, and brown sugar. Caramel and bready malts.

3.0 T: The nose is chaotic, but it somehow works. The taste is more chaotic and doesn't. I'm not sure what to make of this. It seems to be part black IPA, part barleywine, part brown ale, and part winter warmer. Again there's a mix of tropical, herbal, and earthy hops. Rye adds its characteristic earthy spiciness. Spicy like a winter warmer. Caramel maltiness with perhaps a touch of toast. Sweet plum and currants. Brown sugar and molasses. Not bad, but not particularly good either.

3.25 M: Medium body, but I swear it feels heavy on some sips and light on others. Plentiful carbonation bordering on too much. Bubbly. Smooth.