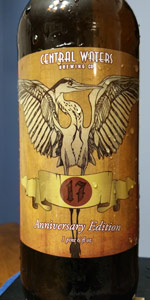 Notes: Seventeen is the product of blending two different bourbon barrel aged stouts to achieve a beer worthy of its forerunners. Barrel aging and blending is an art form, and we like to think we get better at it year by year. Happy Anniversary!
View: Beers | Place Reviews
Reviews: 64 | Ratings: 687 | Log in to view all ratings and sort
Reviews by Jugs_McGhee:

Huge thanks to Duff27 for the bottle!

Served cold into a tulip and allowed to warm over the course of consumption.

Expectations are high given the brewery; these cats always do great barrel aging.

Reviewed live as an imperial stout per the label.

HEAD: None. Just a khaki colour ring. No lacing.

Appears well-carbonated. Not a great-looking stout.

AROMA: Bourbon barrel is a bit assertive, seemingly overwhelming the base. A hodgepodge of vanilla, bourbon soaked wood, and a kiss of toastiness. It's not the rich bourbon profile I've come to expect from Central Waters. The base seems comparatively inexpressive, bringing only chocolate malts and dark malts to the table, along with cream.

Suggests a beer in which the bourbon barrel overwhelms the base instead of accentuating it.

No overt hops or yeast character is detectable, nor is any booze.

TASTE: The vanilla is lovely, but honestly the rest of the build is a bit forgettable. The bourbon barrel isn't even that expressive - some oak, sure, but no real toastiness or rich barrel sugars. The base beer is shockingly plain - some dark malts, chocolate malts, and cream - but that's it. Lacks any added intricacy; there's no coffee, vanilla bean, milk chocolate, et al. Pretty basic for a bourbon barrel aged stout. The barrel does overwhelm the base, but then the base doesn't bring much to the table. Balance is middling.

I just want something more than this no-frills build. Some roasted barley, marshmallow, burnt sugars, more of a bourbon presence...something. I'd stop short of calling it bland, but it does have a plain flavour profile and leaves much to be desired in terms of complexity, subtlety, and depth.

TEXTURE: Smooth and wet. Slightly overcarbonated. Medium-bodied. Adequately thick. Creamy. Could be softer, but it's comforting on the palate. Unrefreshing (to style).

There's no harmony of texture to taste. Its smoothness does help highlight the vanilla - which is the best aspect of this beer.

OVERALL: I've adored the other Central Waters bourbon barrel aged beers I've had, but this offering is oddly lacking. A disappointment, but still a nice brew. I wouldn't go out of my way to find another bottle. Honestly, Central Waters' more widely available bourbon beers are preferable. Won't excite or impress the discerning drinker. But it's drinkable, sure, a sipper though it may be - and it does hide its ABV well.

Don't sit on bottles of this if you've got 'em. Drink now.

A- Dark black body, opaque. Leaves a bit of an oily sheen on the glass. Nice one finger mocha collar and lacing. For the most part, looks quite silky and smooth for a stout.

S- Rich bourbon, oak. Not as clean as Sixteen was, but definitely brings more oak and roasted barley malt than its predecessor did. Good amount of chocolate, some cocoa rounds things out. Not a ton of complexity but very smooth.

F- Rich chocolate flavours abound in the beginning; taken over by smoky, slightly hot bourbon flavours and oak tannins; more roast and bitter malt; not quite coffee in character but more of a smoky type of bitterness, on the finish. It is certainly more bitter than Sixteen was- but in a way it offers more complexity and a different experience.

M- Medium-thick mouthfeel, no thinness at all. Rich bourbon flavours remain on the palate, a bit stinging and a bit warm, but nothing I would call hot or fusel. Good carbonation on tap, smooth and rich, moderately bitter finish.

O- It's a very tasty BA imperial stout; certainly offers more bitterness and complexity than Sixteen did. However, it seems a bit more like any other BA stout. Sixteen was almost unique in how decadently chocolate-forward it was with the bourbon aromas complementing it perfectly. Here, Seventeen is a big blend of chocolate, bitterness, and bourbon that is blended well and quite tasty; but in all honesty it seems a bit messy in comparison to its older brother. I anticipate the bottles to do very well with some time on them- to allow the bitterness to meld in a bit better with the rest of the components.

So I judged each category on its own, and this is what it came up with. I do this for all beers. Surprised me it turned out so high. But on second thought, not that surprising. It is supremely great, and actually not that hard to get. Definitely trade for it!

Smell: So complex. Hard to pick out at first. Biggest aroma is chocolate. Chocolate, chocolate, choklat. Next is vanilla. Big vanilla here. Then nice oak and booze, blended with coconut, which are all melded perfectly. The more it warms, the more the booze come out, though. But I let it warm to room temp, a little too much. Anyway, then we get some molasses, caramel, nuts...a little licorice , definitely. Very nice smell.

Taste: Well...so chocolatey! Nice! More chocolatey than BCBS, and less coconutty, but I'd say otherwise it tastes very similar and is of the exact same quality. I like the chocolate flavor and not the coconut so much, honestly, so I think I actually like this better than BCBS '14. Took me 3 bombers (not all at once!) to realize this, but I believe it is true after several side-by-side comparisons. Very high quality beer. Wisconsin beers are pretty underrated overall tbh, but that's a subject for another time :)

Overall: I can't stop loving this. Had three in my time, and every time it impresses me more. Get this, trade for this, it's not hard. It will make your day if you like BBA stouts, and if you don't like them yet, this will change your mind.

OMG!!! This is by far the best Imperial Stout in the world. No Joke. I have had my fair share of them, and once I tasted this I knew something was different. WoW! That is all I can say. Just WOW! You have to have one of these if you are a fan of the stouts. Have too!!!

A: Seventeen poured into a CW snifter on a cold February night - a beautiful thing - formed a discreet finger tall head. The foam contrived of tiny bubbles, chocolate milk like color and appearance, persisted for a minute before diminishing to a whisper on top of the beer and around the edge of the glass. The beer is midnight black with no signs of light. Agitation formed medium alcohol legs and a few spots of lacing on the side of the glass.

S: Bright bourbon character leaps from the glass. Oak and vanilla wood character is pleasant and sits just under the bourbon. A slight fruity (fruit roll-ups, cherry candy) sweetness that evolves into a candy raisin and prune malt character. Milk chocolate and semi-sweet chocolate chips at mild levels. Alcohol is apparent but mellow and not sharp or offensive.

T: Big bourbon character right off the gate. Dark chocolate, sweet caramel, toffee and raisins. Vanilla, tobacco and slight coffee notes from roasted malts. Middle of the taste comes the mellower chocolate flavors with sweet milk chocolate, cocoa and dark bakers chocolate. After taste is bourbon sweetness with caramel and milk chocolate. Balance is on the side of the bourbon and sweetness is moderate.

M: Mild carbonation with a medium alcohol warming in the chest. Also the bourbon / boozy tingling sensation is prominent in the cheeks and tongue (I enjoy it). Mild astringency that leaves the mouth a little dry with tannins . Body is big and viscous - without the bourbon probably too much, with the bourbon it cuts through nicely.

O: CW does what it does best. I need to try 16 side by side with 17 (which thankfully is possible) to compare, but If memory servers 17 had more bourbon and came off a little hotter then 16. The balance of chocolate to caramel malts also seemed slightly different. From memory I’m going to say I preferred 16, but I’ll alter this once that is tested.

Great nose, getting lots of coconut. Great stuff but I think 16 beats it. Cheers steasy66!

Damn this one is crazy good. I had this side by side with 16, and this one crushed it. Still tons of chocolate and caramel in this one and the mouthfeel was super creamy and perfect.