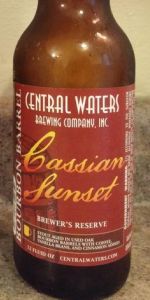 Notes: A bourbon barrel-aged imperial stout with local Emy J's coffee, whole vanilla beans, and cinnamon. The flavor profile of this wonderful beer boasts a lush mouthfeel, with just the right amount of creamy spice character to meld with the rich malt and barrel-aged profile.
View: Beers | Place Reviews
Reviews: 208 | Ratings: 756 | Log in to view all ratings and sort
Reviews by bennyman12:

Came as an extra in a traded from a very generous individual. Looks great! Love actually seeing a head on a barrel-aged stout. The cinnamon comes through most prominently in the nose, but on my palate it is all chocolate and vanilla. I would not guess there was a coffee component if the bottle did not say so. It is fairly thin, And I remember 16 and 17 being the same way. Very nice stout tho! And here's a vote for more impy stouts in 12-oz bottles rather than bombers or 750s!

Thanks to GreenBayBA for gifting me with three of these gorgeous elusive stouts.

Pours a muddy brown to black color with a firm sliver of yellow-beige.

You know, this aroma reminds me of smoked meats. It's strange. I'm actually getting a lot of dill here, as if I've just opened a tinfoil pack of smoked salmon. Did they do some secret ninja fuckery with sorachi? The herbalness is very apparent. Some slight coffee, maybe a faint tin note that could be called cinnamon. Was not expecting this, kind of pleased, kind of like our mediterranean suppers under my roof. Lighter fainter notes of melted milk chocolate bar.

Flavor is highly complex. It's like a puzzle you'd buy but it's more than 96 pieces but less than 140. Like a steak on a grill you are smelling nearby (we put herbs on steak too), but your beer also brings vanilla and coffee ( I swear I don't have my grill on) . Cinnamon, slight red hots, coffee, caramel, and slight chocolate bar all float around politely but never develop a foundation.

Feel is carbonated and hot to start, with a drying stickiness and slight coating on the palate. Substantial. Coating is like what you'd expect from vanilla beans.

Overall, it's what I'd rank as "highly decent, but not like Prairie or anything like that". I know their 4 pack price point and for what they go for it's worth picking up ANY of their 4 packs. Totally delicious, nothing wrong with this beer, lots to ponder on. I keep getting that meat thing, and that's fine with me.

Welcome to Happy New Taking the Central Waters Sunday (Week 719), which may be short-lived due to redundancy, but c'est la guerre!

From the Bottle: "A bourbon barrel-aged imperial stout with local Emy J's coffee, whole vanilla beans, and cinnamon. The flavor profile of this wonderful beer boasts a lush mouthfeel, with just the right amount of creamy spice character to meld with the rich malt and barrel-aged profile."; "Stout aged in used oak Bourbon barrels with coffee, vanilla beans, and cinnamon added".

This sounds fantastic! I recently spoke of heating beer in a double-boiler & this might be another candidate! I began by Pop!ping the cap, followed by a slow, gentle, C-Line pour into the awaiting glass. This, along with the dimpled bottom of the glass, caused a pseudo-cascade followed by the formation of three-plus fingers of dense, foamy, rocky, light-tan head with very good retention, leaving loads of lacing in its wake. Color was Black/Opaque (SRM = 44), allowing ZERO light penetration. Nose was redolent with cinnamon, underlain with chocolate, coffee, vanilla & a light smokiness. 8=O Mmm. The oak barrel aging brought out vanilla, coconut & wood, as well. 8=) Yum. Mouthfeel was medium-to-full, although I found it a tad thin for the style. The taste was exactly as advertised - coffee & cinnamon up front, followed by coconut & vanilla, backed up by a light chocolatiness. Oh man, I could warm this up, throw in a cinnamon stick, a dollop of whipped cream on top & we would be off & running. Once again, I found myself licking my lips following a drink of a beer. Joe Sixpack advises me that my method is "wassailing" NOT "mulling" & there is a difference! How do I suck, I mean, get sucked into these things?!? Well, I am telling you, as I have drank (& become drunk) through this one, it has been a revelation! The cinnamon was the big win with the rest of it as secondary flavors/adjuncts enhanced/fortified by the barrel aging. This was a great, big, great big beer for the holidays! Hohoho. Finish was dry, especially due to the inclusion of spices in the form of cinnamon. Muy bueno! Mexican Cinnamon Chocolate … did I invoke that or did a random synapse just connect & fire?

One of the best BA Central Waters brews I have had. Coffee, Vanilla, and Cinnamon are all present. The coffee takes the backseat while the vanilla and cinnamon mesh perfectly. Great mouthfeel and an outstanding beer!

A: The beer is black when viewed from afar and when held up to the light the edges of the beer are dark reddish brown in color. It poured with a short off white head, leaving just a narrow collar around the edge of the glass.
S: Light to moderate aromas of bourbon are present in the nose along with hints of cinnamon.
T: The taste has flavors of bourbon and cinnamon along with hints of coffee beans.
M: It feels medium-bodied on the palate and has a moderate amount of carbonation.
O: This stout is mostly dominated by flavors of bourbon and cinnamon—I hardly got any of the coffee and none of the vanilla beans. The cinnamon balanced off some of the bourbon flavors.

The last two reviews were kind of brutal and I disagree with them. This stout is one of the finest offerings Central Waters has, it is near perfect. The flavors are balanced and so tasty for me at least. I might even prefer this over Black Gold, that is how good this stout is.

I will say that if you drink this stout right out of the fridge, you are not going to agree with the above. This stout needs to warm up to fully enjoy like most stouts where the Vanilla and Cinnamon really shine closer to 60 degrees or so. Enjoy!

I’m willing to swill anything CW puts in a barrel, so I ran out & bought this without knowing anything else. 12 oz. bottle from the Midwestern master of barrel aging.

The pour is shadowy black & exhibits minimal head. The beer exhales vanilla like my crazy Medusa Head puts out oxygen. Plenty of barrel, light roast, & really, who needs anything else? Lovely.

Cassian Sunset - whoa! Foreshadowed by the label but not the nose, somebody tipped enough cinnamon in here to supplant a daily dose of Coumadin. The spice is up-front & off-putting, & it takes me a couple sips to alter my expectations & get my rioting taste buds under control (promise them barrel & give them cinnamon, & I’m lucky they’re not completely on strike). Light bourbon, & the vanilla rides higher as the beer warms. Dark chocolate arrives mid-palate, & the nearly forgotten coffee makes a dim, strangled appearance. Thick, warming, boozier than anything CW puts out except my beloved barrel aged barleywine. Twelve ounces will be enough, thanks.

I feel this would be off the foul pole (which should really be called a ‘fair pole’) without the spice; perhaps Central Waters just invested in a local cinnamon producer? Good beer, but the cinnamon is just too heavy-handed for this ink-stained wretch.

Quite good if a bit thin. Brown with some auburn tinges and a small mocha head that fades. Smooth cinnamon notes that strike me as wood, cedar, mahogany with subtle vanilla and coffee in the backdrop. Commonly one will get chocolate notes with stouts but those are absent or at least very subdued here to the benefit of the beer - it's more interesting, dry with an impression of sweetness from spices, quite woody and warming.

Pours a deep brown with a nice tan head. Nose is heavy vanilla. Taste is vanilla with some cinnamon, not much coffee or barrel for me. My biggest knock on this beer is like much of the BB Stout , a little thin on the mouthfeel. Overall, Very enjoyable beer, really wish this would have been a Fall/Winter release could crush these on a cold day at$13/4pk.

Poured into a 16 oz stiffer bottled sometime in 2017. Pours a very dark almost completely black, with a solid 2 finger head.

Mouthfeel is bigger than average, plenty of life, maybe a tad dry, and extremely drinkable!

Overall this is excellent, very smooth and easy drinking . Thanks GreenBayBA for this BA treat.

This is top of the line barrel aged goodness. There are so many notes of flavor well rounded throughout drinking this beer. The coffee, vanilla flavor, with a nice sweet cinnamon that gets those taste buds roaring, with after hints of a mellow hazelnut. This Stout is well aged and well put together. I had this fresh from this years batch and definitely on the hunt for a bottle of this! Well done!!!

This beer pours a pure black with a decent sized head. My first impression is that is smells like a really good fudge brownie, but then the secondary notes of cinnamon, nutmeg, and some roasty coffee come through. The flavor also starts with rich fudge, but here the cinnamon is much more apparent - in fact the spice-chocolate combo is rather reminiscent of a mole sauce - plus smoke notes of tobacco smoke, english toffee, and toasted walnuts. The mouthfeel is very, very soft and creamy. Overall this another great barrel aged beer from Central Waters. It is not the best from them, but still well above average.