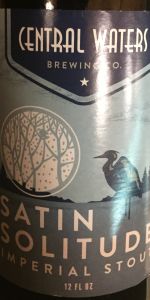 Notes: A liplickingly creamy stout prized for its drinkability, Satin Solitude is crafted with a mix of specialty malts, from caramel to chocolate to roasted barley, to achieve its deep dark appearance and satin-smooth finish. Best enjoyed by a crackling fire on a long winter's night.
View: More Beers | Place Reviews
Recent ratings and reviews. | Log in to view more ratings + sorting options.
Rated: 4.33 by Miles_Nilges from New York

This is a top tier stout, just as full and flavorful as some stuff I've had that were 2-3x the price. A variety of luscious dark malts all the way down. It's simple but effective

LOOK:
dark black color, small off white head, below average retention.
AROMA:
medium roasted barley,
TASTE:
roasty malt, touch of oak, that's about it. Simple and tasty with a touch of bitterness, but just lacking in any complexity.
FEEL:
porter like body (75%), dry,

Reviewed by jeffoert from Minnesota

Overall very drinkable (as the label says). It is nice to have an imperial stout not BA once in a while.

4.37/5  rDev +13.5%
look: 4 | smell: 4.5 | taste: 4.5 | feel: 4 | overall: 4.25
Pours a standard deep molasses black with a thick tan head that was larger than expected. It smells like sweet chocolate and coffee with hints of roasted hazelnuts and slight hints of toffee and caramel on the finish. The taste has the semi sweet chocolate up front with a slightly acidic coffee bitterness in the middle followed by a slightly dry nuttiness with an almost sweet warming alcoholic finish. It goes down very smooth, but the higher alcohol content is more apparent than I was expecting, but it doesn't detract from the quality of the beer. Overall an awesome imperial stout especially if you're tired of barrel aged ones. It's not so boozy you couldn't have more than one. Overall one of the best imperial stout I've ever had.
Feb 03, 2021
Rated: 3.93 by SierraFlight from Virginia

Rated by cmk550 from Wisconsin

Reviewed by MesaDan from Minnesota

3.3/5  rDev -14.3%
look: 3.5 | smell: 3.5 | taste: 3.25 | feel: 3 | overall: 3.25
Re-evaluation…bottle 6/'20: slight clean sweet nose; hue is chestnut with slight amber cast; head is tan and retaining; medium mouthfeel w/ soft carbonation, but still a bit thin, like the barrel aged version; taste has a slight upfront sweetness with a back throat bark bitterness followed by a dry finish. Similar to the barrel aged Brewer's Reserve stout without the oakiness or bourbon taste. Base may be the same. 1st review (~2015)...slight sweet nose and sweet / bitter front palate; the finish keeps you thinking of another taste (3.3).
Jun 04, 2020
Rated: 3.42 by Dougwillhike from New Jersey

Reviewed by NYNorseman from New York

4.29/5  rDev +11.4%
look: 4.5 | smell: 4.25 | taste: 4.25 | feel: 4.5 | overall: 4.25
Picked up a growler from my local tavern and my wife and I are enjoying a glass now. It is dark with copper highlights and it is in fact satin smooth! This is a robust beer with a chocolatey malty smell. My glass has some lacing clinging to the sides and I made a good choice picking this one up. It packs a bit of a punch but it is not overpowering and you could certainly enjoy several of these on a damp and cool night. This is a solid stout- a bit low ABV to be a strong imperial but overall, pretty tasty.
Mar 18, 2020

Flavor: Strong malty flavors of rich milk chocolate, chocolate milk, sweet cream, banana pudding, and caramel. Lots of chocolate with the bread and vanilla wafer providing support. The alcohol provides a slightly vanilla note, or maybe it's just the alcohol to begin with. A mild to moderate airy roast with minimal bitterness. The chocolate is mostly milk and sweet enough. Finishes relatively dry and clean for the higher ABV.

Feel: Leans heavier bodied as expected. Moderate carbonation. Finishes with chocolate on the tongue, but surprisingly relatively dry and clean. Appropriate amount of chocolate left behind.

Overall: A very nice drinking Imperial stout. Nice rich milk chocolate, cream, banana pudding, and wafer flavors. The banana pudding was unexpected though. I would say the banana pudding and whipped cream differentiate this one. Minimal roast, yet nice and dry. Hides the alcohol well, but also has a touch of vanilla from the alcohol.. The dry body despite the higher ABV really settles nicely. Rich, flavorful, yet dry and not overwhelming. Should compare to other standard or imperial porters. Pretty standard here, but nicely done. (Final Rating: 3.85)

4.18/5  rDev +8.6%
look: 4.25 | smell: 4.25 | taste: 4.25 | feel: 4 | overall: 4
Bottle to snifter.
The appearance was a fairly nice looking dark brown close to black color with a small off white semi-foamy level head softly sliding off. Just a little bit of concave lace sliding along my glass.
The aroma had some dark chocolate malts with a marshmallow to vanilla sweetness with some dark fruits/sweet side of anise then allowing a refined semi-sweet coffee to ashy roast.
The flavor followed through carrying out the strength of all of the prior mentioned aromas towards the sweet side. Subtle toasted nuts and dark bread slid in underneath. Mild aftertaste of sweet roast, vanilla/marshmallow sweetness, and roasted dark chocolate character.
The mouthfeel was about medium bodied,perhaps just a touch above with a fair sipping quality about it. Nice carbonation, perhaps just a wee bit under allowing some stickiness to come about. Finishes fairly smooth and creamy with the expected sticky chocolate notes, small touch of vanilla/marshmallow.
Overall, nicely done imperial stout somewhat drawn up as a milk stout. Would definitely have again preferably this time of year.

3.85/5  rDev 0%
look: 3.75 | smell: 3.75 | taste: 4 | feel: 3.75 | overall: 3.75
Poured from 12 oz. bottle into a stout glass. It pours a very dark cola color with a thin, medium-khaki head and lacing. It smells more like a Milk Stout than an Imperial Stout; it may be infected but it's fairly buttery with hints of cream and marshmallow. Fortunately, the taste redeems. There is roasted malt, coffee, chocolate, and caramel. As the glass warms, I'm also tasting nuts and earthy char. It's rather thin in body with mild carbonation, and for 7.7% it drinks easily. Overall, Satin Solitude is a good Stout but not particularly memorable.
Jan 25, 2020
Rated: 3.99 by craigbelly from Iowa

Reviewed by WebbFlyer from Minnesota

sweeter, almost milk stout like, a bit of a dark chocolate taste

rather light, pretty easy to drink. Not a bad stout. Perhaps better warmer?

Pours a nearly-opaque brown/black with little head but good lacing. Pours thin for the style.

The aroma is the best attribute of this one. Bitter coffee, lactose, and light char/smoke. Hints of ... coconut?

The flavor follows the nose but sweeter. Straddles the line between milk and imperial stouts, with a prominent lactose note, although there is plenty of espresso and chocolate as well. Sweet for the style.

The mouthfeel is thin for the style--medium at best. Could use just a bit more carbonation or "something" to help the finish and cut through the sweetness.

A decent brew, but one that seems like it is trying to be both a milk/cream stout and an imperial stout and, as a result, doesn't quite get there in either regard.

Reviewed by MercInc from Wisconsin

Rated by KegLegs from Minnesota

Reviewed by cardfan212 from Minnesota

Taste - Smell translates pretty much one to one on the tongue. Simple and tasty.

Overall - It's a good beer. Nothing groundbreaking or innovative, just a well made stout.

4.2/5  rDev +9.1%
look: 4 | smell: 4 | taste: 4.25 | feel: 4.5 | overall: 4.25
Bottled and possibly bottle conditioned
pours a jet black body with near perfect tan head
aroma is like Guinness export used to be when it was bottle conditioned and good quality
flavour is quite similar slightly sweet,woody, dry with a taste of candy stick cigarettes