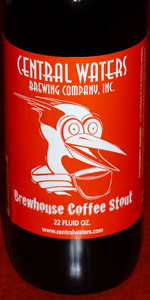 Notes: A coffee lover's delight! A wonderful stout infused with coffee that is specially roasted for us by Emy J's in Stevens Point, WI.
View: More Beers | Place Reviews
Recent ratings and reviews. | Log in to view more ratings + sorting options.
4.25 by akk14 from Illinois on Apr 13, 2022

Closing out the last days of winter with this tasty coffee stout. Hits on all points, nice cold brew coffee influence, delicious taste and smell, and abv well hidden. Killer deal at $10 for 6.

Clear cola color, the scent is boozy and distant, lots of coffee bean. Taste is so good, I'm not even a huge fan of these coffee stouts, but this is just done damn well. The hops and the dark grains and the coffee all meld into one flavor, I wasted one of these on a roast and regret it. World-class

Great value bang for buck.
Coffee coffee coffee. This is a load of coffee in a beer. Not to thick. Can’t taste alcohol.
Pretty delicious for $10 a six pack

Nice stout, which a heavily pervasive coffee flavor which argues against multiple glasses. . For it's depth, there is surprisingly little bitterness or aftertaste.

Bitter black patent malt upfront to the nose. There's a strong aroma of coffee. No notable sugar nor cream.

Smooth body with a nitro-like carbonation. The flavor is mostly coffee but there's a good dollop of Baker's chocolate in the mix. Not quite as dry as most stouts. Long, deep roast malt aftertaste.

Look is black with tannish head. Fairly prominent lacing. Aroma light on coffee and taste followed which is somewhat disappointing for me. Chocolate taste came through more. Bitter aftertaste, but not too dominant. Canned in Oct of 2019. Not bad, but not my favorite stout.

Poured from a can into a tulip.

Pours an opaque brownish-black (blackish-brown?) with a excellent three-fingered, big-bubbled, foamy tan head that lingers decently and gives way to an excellent ring of lacing.

The aroma is a remarkably balanced blend of roasted grains, caramel malt, and coffee in the foreground, with hints of vanilla, toffee, brown sugar, dark chocolate, smoke/char, cashew, and dark fruit. A tasty aroma.

The flavor is excellent, but a bit of a letdown after the smells. Caramel and brown-sugar sweetness hits hard, but is quickly offset by roasted malts, and coffee--lots and lots of excellent cold-brewed coffee flavor. A variety of chocolate flavors--milk, dark, semi-sweet, cake batter. A shade of booze warming the background.

The brew is certainly full-bodied, yet it never feels heavy or sticky. The carbonation is superb, and it has a drying, instead of a sweet or sticky finish.

This is one of the best coffee-forwards I've had. The coffee is very strong and present, yet it never overpowers the other things that are going on.

Canned on 10/24/19. 12oz can poured into a tulip. Pours almost black; small khaki head that fades leaving nice retention and lacing. The aromas have a balanced amount of coffee. Subtle hints of vanilla and chocolate. Malts are there. The flavors follow the nose. The coffee shines and is the star without completely dominating. More hints of vanilla and chocolate. Some roasted characteristics. Low sweetness. Moderate bitterness. Malts do their thing. Alcohol goes unnoticed. Mouthfeel is medium-bodied with moderate to active carbonation. It's sharp, fluffy, smooth and easy to drink.

This is a pretty solid coffee stout. Nice coffee flavors. Well done. I like it.

From the growler via Jungle Jim's Eastgate in a snifter.
This nice brew pours a dark blackish brown with a thin
cola highlight and a nice head of khaki foam that settles
to a thin ring, thin dusty layer, and sports some rather
nice lacing. Nose of coffee, light char, and dark sweet
malts. Flavors nail it with dark coffee with moderate
bitterness, touches of dark cocoa, and a thin touch of
cream amongst and smearing of dark fruit jam of
blackberry and raspberry. Nice mouth feel; medium full
body, medium light carbonation, and a rich coffee and
dark cocoa bitter malt finish.

Overall, a SOLID brew from a new to me brewery!

There are a few things that keep me here in Lancaster, PA. Two are my mother & the family home + her brother (my maternal uncle) & their family home. Another is our proximity to the major northeastern metropolitan areas & our (relatively) easy access to them, especially by/on public trans. The big one, though, is our insane distro! Goddam, we are the ONLY state outside of Wisco (my love) to get Central Waters! I met their owner/brewer many years ago during PHL Beer Week & it is only because of some connection of his that we see them at all. Obviously, we do not get everything, but I will take one of anything that we do get. This bomber was from The Beer & Beverage Shoppe on Roseville Road & those guys could not be more accommodating! In this case, I merely needed to pluck a bomber from the shelf.

From the Bottle: "Made with Fair Trade coffee specially roasted for us by www.EmyJs.com Ice Cream*Smoothies*Coffee*Tea".

I Pop!ped the cap & sat in rapt fascination & contemplation for a moment or two before moving on. When was the last time that I indulged in a bomber? How to handle one? What if it does not bond with me & wants to go home to its fermenter? Eh. I snapped out of it & went with a slow, gentle C-Line pour into the now anxious glass. Ooh, my, did it foam forth! Am I having Stout or cappuccino? The former. It created two fingers of dense, foamy, rocky, deep-tan/light-brown head with very good retention, but without much in the way of lacing. Color was Dark Brown to Very Dark Brown (SRM = > 27, < 34) with NE-quality clarity & ruby highlights. Nose was definitely of coffee, but not in an intense, overwhelming way. Instead, it was more towards a light roast, the kind of thing that I blend with the dark roasts to achieve a more mellow blend, Mouthfeel was big, soft & creamy. Wow! It was like having a well-endowed gal unleash the assets, except in the mouth & on the tongue. Hello. The taste was much like the nose - definitely of coffee, but in a lighter, mellower roasty way than so many of its contemporaries. It was not as rich or robust as my morning coffee, but that was fine. Mine uses several scoops of grounds & has to be coaxed into dripping through the filter. This was a much lighter, less roasty blend that was actually counterintuitively mellow. A mellow Coffee Stout?!? Holy sacrilege, Batman! But wait, Robin! It was a relatively big beer in a bomber (22-fl oz) format. Would you want intensity in quantity? Not me! This was like that mid-afternoon cuppa coffee that I often crave but do not have out of fear of lack of control. All I need is one of my coffees mid-day & I will be orbiting the Earth until well after Midnight. Ugh. This was just so pleasant as I drank it that I almost began to think that it may have been tea-infused. No, this was definitely coffee, but fatigue was setting in. It finished with a pleasant dryness that made me want an amuse-bouche or a small cake-like snack as an accompaniment. Perhaps a Tastykake of some stripe … YMMV.

Poured from 22oz bottle into glass. No bottling date information found but this has been in my refrigerator for awhile.
Dark brown colored body, with medium brown back lit highlights. One finger of light tan head, which settles back to an interrupted cap and ring. Some minor lacing but most slides back down into body.
Aroma of roasted malts and coffee.
Taste express a lot of the coffee flavor along with the roasted malts.
Medium mouth feel. Good carbonation.
I have enjoyed this beer over several years for its coffee flavor, and this pour exemplifies this. Rather straightforward, but done well.