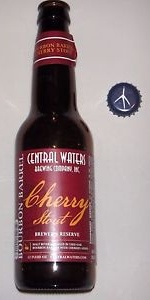 Quick review of a 2019 vintage. Not awful but certainly not what I have come to expect from Central Waters. This is like a chocolate flavored cherry cola.

I think this beer is very underrated on here. Just the right amount of cherry taste. Not syrupy or thick whatsoever. Smooth finish. I am very much enjoying this beer and will definitely pick up another 4 pack in the future. Another great beer from Central Waters.

Reviews here are all over the map, which makes me think this might not be a very consistent brew (or sensitive to storage issues). Mine poured with a limited head that quickly vanished. It's muddy and opaque, with a thin mouth feel that's more like a porter. The alcohol hits like a ton of bricks with not much sweetness to balance it out. Nose is basically cherry brandy with birthday cake. Overall, this is really lacking in my opinion. Tastes like someone dropped a shot in a beer.

12oz bottle coded 34419 (12/10/19 - nearly one year old) poured into a Spiegelau stout glass at fridge temp, no ABV listed on label. The beer pours very dark brown with red tinted mocha head. The head recedes to an irregular fluffy ring. The aroma is roasted malt, oak and vague fruit. The taste is tart cherry initially before the roasted malt, oak, bourbon and moderate bitterness transition to punctuate the middle and finish. The mouthfeel is medium bodied with less than medium carbonation and a dry oaky finish. No hint of the ABV in the taste or aroma. Overall, very good. The tart cherry and stout flavor mingle well for a complex and enjoyable beer.

Thin with and extremely subtle tartness from the cherries.

I'm on record as saying that I love it when a brewer delivers on his promises. A cherry stout should be big on cherries, and this one is for sure. Vintage 2019, poured cold from a 12-ounce bottle into a Master's Reserve whiskey glass and allowed to warm to near room temperature. Deep mahogany in color, with a finger of tan head and deep ruby highlight here and there. Big aromas and flavors of tart cherry and bourbon barrel take center stage as expected, with notes of dried fruit, licorice, molasses, and char creeping in on the back end. Medium bodied for a big stout, not at all syrupy and with good carbonation. Dry finish, with a little tannic astringence. Surprisingly not a whole lot of alcohol warmth. Well balanced with nothing overpowering here, just an outstanding and dangerously drinkable big stout. Highly recommended.

12 ounce bottle, 2019 vintage. Thanks to Brutaltruth for this brew! Served in a snifter, the beer pours dark brown/black with about an inch tan head. Head retention is decent, and there isn't much lacing at all. I like the aroma a lot, the brew smells like cherries, vanilla, bourbon, chocolate, caramel and oak. I think the taste is similar to the aroma, with tart cherry, vanilla, oak, bourbon, chocolate, dark bread, caramel and coffee flavors. Mouthfeel/body is medium, it's smooth and a bit coating and creamy with a moderate amount of carbonation. Does seem thin for a big stout, though. With all that being said, I thought it was tasty and would like to try this again sometime!

This beer pours super dark brown. Ruby highlights are visible when held to the light. It is topped with a feeble tan head that leaves no lacing.

The initial smell is chocolate covered cherries and vanilla. I even get a little caramel as it warms.

The taste is cherry and dark chocolate. I get a little black coffee in the finish. I get some booze.

Medium bodied with a smooth mouthfeel. It seems thin for a barrel aged stout.

It is a good beer. I wouldn't say that it is worth the price tag. Overall it is thin for a stout and lacking in barrel character other than the boozy taste. I wouldn't buy another four pack. It is not a drain pour though. I know a lot of people on here like dumping their beers after one unsatisfactory sip. I still respect the alcohol that this beverage contains.

12oz bottle poured into a tulip. Pours a dark brown with light brown hues; khaki head that fades leaving decent retention and lacing. The aromas have a subtle mix of cherry, cocoa and vanilla. Subtle bourbon aromas. Malts are there. The flavors basically follow the nose. Some cherries and milk chocolate. Subtle hints of vanilla. Mild tart characteristics. There's a sweetness to it, but nothing crazy at all. The bourbon is subtle, balanced and blends well with everything. Wood and oak is noticeable. Hints of black pepper in the mix. Malts do their thing. Finishes dry. There's a subtle warmth in the finish, but the alcohol is ultimately well hidden. Mouthfeel is on the lighter side of full-bodied with active carbonation. It's almost watery and thin, but in a good way. It's sharp, crisp and dangerously drinkable.

This is a solid brew. The bourbon characteristics don't dominate, but they blend well with everything. Balance is the key with this one.

12 ounce bottles were 5 bucks apiece in Waterloo. Nothing about the bottle's art signals fanciness, other than the price and the phrase "Bourbon Barrel" on its side.

It pours thick and dark. You have seen a stout. This one looks nice but the appearance deserves neither poetry nor any attempts toward straining out some fancy prose. It looks fine.

Smells nice. Robust, pleasantly rough. This probably would have been one of the most interesting beer aromas in 1997 or so. Today, everything is pornographic. Now, however, after a couple sniffs I realize they're pulling off some Houdini shit here and the cherry nodes are actually the roughest part of the beer, since the bourbon-aged stout-y nodes are just like vanilla and melatonin. This makes the aroma seem, at first, thinner and more accessible than it actually is. After you get hit by the ABV wallop after a sip or two, however, you learn to sniff more cautiously.

Tastes, likewise, incredibly old school but also incredibly unique. These magnificent bastards! They've actualized my sick desire of a beer I would have rated near-perfect in 2006! And it still holds up today, to those of us with less idiotic pallets. Remember: the cherries are real and they are tart and they flip the contemporary script by being the thing that smoothens out the very rough and aggressive (but pleasant) high intensity stout. Cherries up front, bit of vanilla in the middle but mostly bitter barley and some zippy hop nodes, finishing on a fireworks melange of stout and fruit.

From the 12 oz bottle in a snifter. This solid little brew pours a
dark brownish black with a thin head that dissipates quickly
to a thin ring with no lacing. Nose of bourbon and subtle cherry
with some oak and astringent booze notes among some subtle oak.
Flavors lightly exceed the nose with bourbon and brown sugar with
dank oaken notes and subtle vanilla drenched in cherry notes
along with touches of cola and light char. Mouth feel is medium
full verging on full, low carbonation, and a dry finish that is
a touch thin.

Overall, a solid brew but not as good as the standard imperial
from them.

Pours jet black with a thin, off white head that collects on outside ring of glass.
Smell of chocolate covered cherries. Plenty of sweet malt.
Sweet, tart cherries right away. Bakers chocolate and a little maple syrup. Some sweet bourbon.
Not a huge mouthfeel.

Consumed bottle in May, 2019 with 2018 vintage notched on label. Beer was acceptable overall. Cherry flavor was faint. Considering Bell's 30th anniversary Cherry Stout as my mental baseline for cherry taste, which may be unfair comparison.

This one pours a very dark brown/nearly black color, with a small white head, and not much lacing.

This one smells like chocolate covered cherries that are mostly chocolate, sharp oak, bourbon, and coffee.

There's not a ton of cherry here, but that's fine with me - I wouldn't want too much sweet tartness here. There's lots of barrel, mostly oak, but with some leathery and boozy bourbon too. There's some vanilla and caramel notes, and a big roasty coffee flavor as well, along with light strands of chocolate.

This is medium bodied, and pretty thin - but that's easily par for the course for Central Waters. It's drinkable despite a hint of booziness on the finish.

I almost always love stuff that comes out of Central Waters' barrel program. This is mid level for them, but still a nice little treat.

This really is not that good. Pours in this oddly unattractive limbo between dark brown and black with a faint head, little retention and less lacing. Aroma of NyQuil. Taste of way too much baker’s chocolate with a hint of strange sourness that was supposed to be, I presume, sweet? Feel is thin with little carbonation.

Don’t get me wrong: overall, this brewery is masterful when it comes to barrel-aged dark beers. This however was a total swing and a miss.

I prefer the tart cherry in this beer to the sweet cherry I have had in other beers. It does not have that cherry coolade finish. It is one of the best fruit flavored stouts I have had.