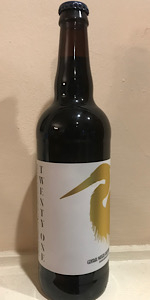 This is almost a bit too dry on the finish. There's not enough fullness or sweetness to support the extremely dry tobacco and herbal bitterness here. There's lots of barrel here, bitter, roasty, and super oaky.

This is semi-thin, which is usually the case with Central Waters, and the body isn't big enough to support the intense barrel character on this one.

There was definitely stuff to enjoy with this one, especially fans of big bourbon in their barrel aged stouts, but I could definitely imagine a better version of this beer overall.

Reviewed by BarleySane from Virginia

4.33/5  rDev -1.8%
look: 4.5 | smell: 4 | taste: 4.5 | feel: 4.5 | overall: 4.25
As usual, CW's anniversary beer brings all the traits that I love about their "normal" BBA Stout, but turned up to 11. Strong boozy heat and bourbon spice on the nose, but more of a sweet, vanilla/honey-forward bourbon like Four Roses or Evan Williams. Fudge and plenty of barrel oak and tannins on the palate, still with plenty of booze but enough sweetness to balance.
Feb 26, 2020
Rated: 4.5 by Montanabeerz from Montana

Notable pine, alcohol, cola and some wood. Needs some dark chocolate or sweetness.

Taste - Taste is much less harsh than the nose (which is not a knock on the nose). Charred barrel right up front, bitter chocolate, big bourbon, vanilla tons of oak. Really rich fudge.

Overall - Excellent BBA stout you could not ask for much more.

Reviewed by Strix from Wisconsin

Suitably thick for a big stout.

Not a perfect blend of flavors, but hitting some nice notes. An enjoyable brew.

My first impressions are that it's thick and exhibits charred brownie crust characteristics with toasty dark bourbon barrel. The light bourbon character comes without heat, but with a spicy rye-like accent. Dark chocolate and chocolate wafer populate much of the middle. Mature touches of sassafras, black pepper and dates compete with pastry characteristics of vanilla, marshmallow and fudge as it warms, and it becomes less thick and more drinkable than you'd expect.

This has a crisp fizz at first, which becomes a firm almost filling carbonation. The slick body finishes tingly semi-dry and semi-sticky with a warming swallow.

Reviewed by Vidblain from Minnesota

The beer features plenty of chocolate, and also a significant bourbon and barrel presence. It's definitely better balanced that Eighteen, but still a bit warm. Finish is clean. It drinks quite easily in spite of the bourbon.

It's an excellent beer overall. Recommended.

4.46/5  rDev +1.1%
look: 4.25 | smell: 4.5 | taste: 4.5 | feel: 4.25 | overall: 4.5
650ml bottle, served in a Central Waters goblet glass. Pours a dark black body, one finger offwhite head, good retention, splotchy lacing. Smell is cocoa, milk chocolate with a bit of marshmallow sweetness (like Swiss Miss), wet oak, a bit of smoky bourbon, oak and vanillin. It's a fairly straightforward bourbon-forward, big imperial stout, executed well with a bit of a hefty bourbon barrel presence that is typical for CW anniversary stouts. Flavour follows- big bourbon character, light vanillin, big milk chocolate, mildly dry oak presence. It's got a nice mild fudginess as well, though it doesn't approach that of CW16- which I hold as the gold standard for CW anniversary stouts. Mouthfeel is medium-fuller bodied, good carbonation, mildly bitter and dry cocoa finish. As far as CW anniversary stouts go, it's fairly straightforward and hits all the notes- in a baseball analogy, beers from this series will reliably hit doubles and triples all day, but grand slams are rare.
Mar 30, 2019