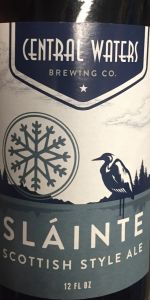 Notes: We have taken a traditional Scottish-style ale, with its rich malt characteristic reminiscent of dark fruits, and deepened its flavor with the addition of cherry wood smoked malt. This beer features a full body alongside drinkability - a rare commodity. We enjoy this seasonal throughout the long, snowy winters of Central Wisconsin. You should, too!
View: More Beers | Place Reviews
Recent ratings and reviews. | Log in to view more ratings + sorting options.

Taste brings on a light tea note, light tobacco note to compliment the cherrywood smoked malt/wood. Mouth feel stays true, smooth, non bitter aspect going on. Carbonation above average, barely, nice. Any dark fruited note is minimal, like the bitterness. I guess part of the reason I dig on this more than the average scottish beer is it lacks some of those things that are bigger in the ones I'm not as keen on.

Still prefer the bourbon barrel version, but this is one of the best either way.

Reviewed by wl2bill from Wisconsin

Rated by LennyBound from Illinois

4.09/5  rDev +6.2%
look: 3.75 | smell: 4 | taste: 4.25 | feel: 4 | overall: 4
Poured from 12oz bottle into glass. Stamped on bottle neck is '29917'.
Ruby brown colored body, which really shows red when presented to light. Long lasting beige creamy cap and ring. No lacing.
Has a bready malt aroma, with a hint of smoke and dark fruits.
Taste is dark, smoky malts and dark fruits, with a middle flavor similar to a bran muffin, and then the end is more like tea and cocoa. No bitterness. Has a dark roasted malt, chocolaty after taste.
Medium to fuller mouth feel. Good carbonation level.
A malt driven beer, but quite involved with the tastes of bread, smoke, tea, and chocolate. A little sweet too. The spices involved are subtle but present, and allow the beer to be a very good winter warmer.

4.83/5  rDev +25.5%
look: 4.25 | smell: 5 | taste: 5 | feel: 4.25 | overall: 4.75
Sláinte has a medium, beige head, a semi-clear, red (brown, with light shining on it) appearance, and no glass lacing. Aroma is of rich, spiced, brown, holiday breads, and the flavor is of the same, with cherry, brown sugar, a touch of chocolate, a touch of syrup, and essentially nonexistent bitterness. Mouthfeel is high medium, and Sláinte finishes midway wet/dry.

Rated by craftaholic from New York

3.83/5  rDev -0.5%
look: 3.75 | smell: 3.75 | taste: 3.75 | feel: 4 | overall: 4
quality brew, a great and rather classic take on the style, but a beer that seems to me somewhat simple for how evolved and dramatic a lot of the central waters beers are, especially the barrel aged stuff, this is a much more everyday sort of beer than i have ever really known them to make. looks the part and smells great, not as smoke and earthy forward as i thought it would be, sort of sweeter, richer, more caramelized, and a little bigger, but not lacking for grain depth, with a serious dried fruit and even a mild spice element. the yeast is also kind of cool, bready and european, almost english, but real frothy and hearty, which i think is great with the malts all over this one. fig jam, toffee, bran muffin, and maple to this in the finish, and lots of thick body but a little carbonation keeping it moving. i have a barrel aged scotch ale in the basement, pretty sure thats not same base beer, but this has me mighty excited for that, if you can do this, you can do that too. always impressed by central waters, they somehow still seem to fly under the radar more often than not...
Apr 24, 2017
Rated: 4.01 by smithj4 from New York

Reviewed by Benish from Utah

Taste: has a subtle earthy and tea-like taste with vanilla undertones. Nicely sweet with no bitterness. Taste kind of like a creme brûlée.

Mouthfeel: medium bodied with a little too much carbonation.

Overall: this really impressed. Exceeded my expectations because of the ratings. I have had scotch ales that I did not care for, but this is not one of them!

Rated by FMSmith from New York