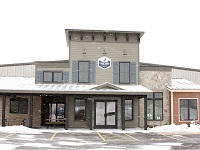 I have been here twice now and should probably do a review. Once was for a release and once was during “normal” operations.

This is a pretty large brewing facility as it seems to be three or four large pole barns that have been joined together. They have added on a kind of false store front that I think looks really good.

As you enter on non-event days, the ordering bar is to your left and it is right near the cooler for beers to go. There are a couple of different rooms inside. One looks like it can be used for private events and the other is a large taproom. There is another bar in the taproom. There is lots of wood, iron some low-key brewery stuff on display all housed under very high ceilings. Note when we were here for the release, they had a very large barrel room open that housed the band and some portable bars. They also had a large tent in use on that day.

They do have a nice outside patio. We took advantage of it last time we were there.

Service is friendly & I think I counted 12 or so beers on tap. Their beer is fantastic. From APAs and Reds right on up to awesome barrel aged imperial stouts, they hit all the right notes. During my last visit, I had a highbred of a sour and an APA and it worked.

Parking can be problematic during a release but they seem to do a good job and the rest of the tenants in the small industrial park seem to cooperate.

Well worth a stop and I think I will be here two or three times a year even though it is an hour drive.

This is just a very nice place. We go maybe three times a year as it is about 2 hours away. People are always friendly, the beer and the service are very good. Wish it were closer !

I'm always a bit surprised by how large Central Waters' brewing facility is - as compared with the size of their tap room. Releases tend to be a little congested and wild as a result, which is good and bad - lines are long and seating is limited. I'm sure warm month releases are better, but man, parking gets scarce, and finding a safe place to put down your beer isn't easy in the winter.

But, staff is friendly, selections are excellent, there's always tons of nice swag to be had, and bottles and cans aplenty. I like Central Waters a lot - just wish they weren't so far off the beaten path. Not exactly conducive to easy tourism.

Truly imparts the heart and feeling of modern Wisconsin brewing. Located in a field in Amherst Wisconsin, this brewery appears a small stone in the sparse landscape, Almost instantly i feel immersed in the atmosphere, the layout so casually implies the connection with the region and community, Please stop by for regular offerings if you have the inclination!

V- I walk into a beautiful tap room and smaller retail area. Very roomy and Industrial and has a cool lift up the garage door for warm days. I was there before the tap room was open, however. That didn't stop the fun. We are greeted buy a bartender at the door that let us sample anything we wanted to. After the sampling we took home many bottles. The bartender was very knowledgeable nice and Speedy service. It felt like we got the inside experience.
Q- Central Waters, of course the quality is very high. They had several beers on tap including Bourbon Barrel aged and Tequila Barrel aged beers.
S- my wife and I had the full attention of the bartender as we were there before the tap room was open. She took great care of us and we had a wonderful experience.
S- a wide variety of world-class beers!