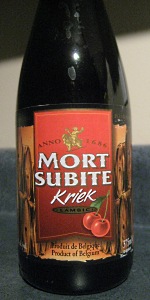 375 mL bottle from the LCBO; best before Mar. 2014. I haven't had any flavoured lambics in quite a while, despite the fact that they are generally my favourite 'fruit' beer. Needless to say, when I spotted this one on the shelf, I quickly grabbed it. Poured into a tulip glass.

Pours a beautiful, clear ruby-red colour, topped with one finger of sparkling, creamy off-white head with a bit of pinkish stain to it. It wilts away gradually over the next 5-6 minutes, leaving behind a dense, lumpy cap and collar, as well as smears of lacing on the side of the glass. The aroma is quite sour and funky, with lots of sour cherry pit and a few vinous notes. Some sweetness, but leaning toward the tart side on the nose.

Pretty yummy stuff, with sweet cherry and wheat malt dominating at first, and the sour cherry pit notes rounding things out at the end. The funky barnyard notes aren't dominant, but rather underlie the more prominent cherry infusion, with a few raspberry vibes as well. Reasonably well-balanced between sweetness/tartness, but it could use a little more of the latter for that puckering quality I love in these styles. Other than that, the mouthfeel is light and spritzy, with a good bite from the carbonation.

Final Grade: 3.63, a solid B grade. Mort Subite Kriek is flavorful, tasty stuff that I'd say is worth a try, but it still kind of straddles that line between alcopop and beer, so purists or serious lambic fans probably won't dig it that much. I really wish these sorts of brews were available year-round in my area, but for now it seems fruit lambics will remain a once-in-a-while thing for me. I rarely drink these styles in general, so it's fair to mention that I'm far from a connoisseur here. This might not be the best kriek in the world, but it's still tasty and easy to like, with a nice balance of cherry tartness, sweetness, and funky lambic goodness. A very quaffable brew that I would suggest as an entry point into the style for anyone curious.

Love love love this beer. Since belle-Vue went bye bye at the LCBO. (I suspect due to cherry juice) this is the only kreik we can get on the regular.

A - Poured with one finger of white foam on a clear, amber colored body. The head fades slowly and leaves thick lace.

T - A sweet, candy like cherry character up front with some malty caramel in the middle. Finishes with caramel, tart fruit, and dark sugar.

D - A very strong cherry presence with enough sweet and sour character to be eminently drinkable.

Small corked bottle, poured into a wine glass for lack of a better one while in Toronto.
It looks real nice, glowing cherry color, long lasting white head with a slight pink tinge, good lacing.
Aroma is cherry, some acidity, sugar and candy.
Light bodied, refreshing, sweet, perhaps a bit too sweet, but somewhat balanced by acidity and minimal sourness.
Good, but would be better with less sugar.

A: Pours a nice light rose color with a thin fizzy head. No retention and no lace.

T: Lots of sweet cherry with hints of citrus and candied sugar.

M: Rather light in body, would go as far to call it thin. Very fizzy.

D: It's not bad, your middle of the road kriek.

Rose wine look about it, pinky red, with a thin white head that became a wisp and collar very quickly.

Sweet cherryade smell, but with a sour twist too.

The taste was also sweet and sour, very cherry and getting more sour as the beer warmed.

A little on the thin side when compared to others within this style. It is almost watery once you get through the fruit flavours.

The sweet and sour mix suits my palate and I can see traditionalists pooh-poohing the sweetness and wanting more sourness, but I thought it fine.

The beer has a good inch head and a pink colour to it. The head retention is very good.

Pours a red touched ruby with a thick and frothy crème head. Nose is candied sugars. Flavor is cherries, sure. But it's just a sweetened seemingly artificial flavor profile. Clearly additives have been used. Feel is slick and sticky thick on liquid and the carbonation is standard. This is just like Lindemans. So if that is your thing, you'll be able to appreciate this more.

A: The beer is clear reddish amber in color and has a moderate amount of carbonation. It poured with a finger high off white head that died down, leaving a short head covering the surface and lots of lacing down the sides of the glass.
S: Light to moderate aromas of cherries are present in the nose along with some hints of oak.
T: Like the smell, the taste is dominated by flavors of cherries along with underlying notes of berries. No sweetness is perceptible.
M: It feels light-bodied on the palate and has a moderate to high amount of carbonation. The cherries contribute slight amounts of tartness.
O: This beer is easy to drink and the cherry flavors didn't seem to be artificial or too sweet.

On tap at Chez Leon.

T-This one is skewed towards being sweet rather than sour. Cherries are evident and pleasant.

M-Nice body-not as thin as some lambics. Quick dry finish.

O-This is a drinkable lambic with strong cherry flavor which skews towards being more sweet than sour but not overly sweet to the point of tasting artificial.


Mort Subite Kriek from Brouwerij Mort Subite
Beer rating: 84 out of 100 with 355 ratings