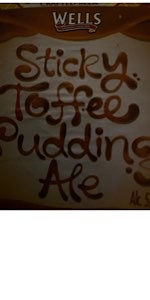 Notes: Two of the things Britain is renowned for across the globe are traditional ale and puddings. Following the success of Wells Banana Bread Beer comes the latest addition to the exquisitely crafted Wells ales range – Wells Sticky Toffee Pudding Ale.

Wells has been using age-old traditional brewing methods to perfect its ales since 1876 and Wells Sticky Toffee Pudding Ale is made to those same exacting standards. It is brewed with our own accredited Natural Mineral Water and the choicest English ingredients. As a result, it delivers all the satisfying, complex taste you’d expect from a true beer but with a unique, indulgent twist.

Using traditional British desserts as our source of inspiration, we discovered that the natural, rich flavours of Sticky Toffee Pudding could be exquisitely combined with darker malts to create a truly distinctive ale. With toffee and caramel hints and rich fruit aromas, Sticky Toffee Pudding Ale is an intensely satisfying beer.

Taste is a bit sharp and astringent. Molasses and vanilla come through. No noticeable sweetness.

The name sounds better than it tastes. Glad I tried it but I won't rush out for more.

Sticky toffee? Definitely - and, shockingly, it doesn't taste artificial. Could have better depth of flavour, but the toffee they're after is there in spades. Caramel, brown malt sweetness, faint herbal hop character, pudding-like tangy flavour, vanillin.

Balanced albeit simplistic, nailing its gimmicky titular flavour with aplomb. They accomplished what they set out to, though I wouldn't call the mouthfeel sticky per se. Smooth, wet, medium-bodied, not unrefreshing, well-carbonated.

A drinkable gimmick ale that I'd revisit and certainly a better beer than I expected given its premise. But it's far from a top tier beer regardless of how one approaches it style-wise.

Reviewed by James94 from England

3.95/5  rDev +14.8%
look: 3.75 | smell: 4.25 | taste: 4 | feel: 3.5 | overall: 3.75
I'm trying this beer at the Blackstone Pub & Eatery in Gadsden, Alabama. It poured a clear rich mahogany with thin off white head that is leaving some lace. The scent had Heath bar flare. The taste was nicely balanced and easy to drink with sweet toffee presence throughout. The mouthfeel was lighter in body with good carbonation. Overall its a good beer and great for last call...or after dinner.
Aug 01, 2019

3.06/5  rDev -11%
look: 3.5 | smell: 3 | taste: 3 | feel: 3.25 | overall: 3
L- Dark chestnut red, clear, pours with 1Cm fine pale tan head, very slowly reducing. Later to lacing.
S- Prominent toffee scent, over a mild toastiness.
T- ...follows the smell, clearly toffee'ish going into a nutty toastiness.
M- The somewhat richer than usual taste on top of 5% ABV yields something that feels like it could be higher than that. The balance is quite clever, the nutty toastiness balances the immediate toffee side.
O- How do you rate a beer that I now see is marked 'Beer with toffee flavouring'? I note that's flavouring instead of 'flavour' - presumably an ingredient - yet the only ingredients listed are hops (fuggles and goldings), malts (ale, crystal and chocolate) and barley. Where does the 'toffee flavouring' feature, I don't see it? Added to which...
The front main and neck lables say 'Eagle Brewery'. The micro-printed rear lable says it's brewed by 'Marston's (Eagle Brewery, Bedford, MK40 [etc])'. Marston's took over previous brewer Wells & Young's Ltd., who were based at the Eagle Brewery, in 2017. Confused, I am? But it's too much smoke+mirrors for me. Interesting trying it, but I prefer knowing what is in the beer I'm drinking.
Bought from BeersOfEurope. 500ml, BB: 31/3/2020.

Reviewed by jbclib7285 from Georgia

Feel: watery and empty. This is what i disliked the most about the beer. With toffee pudding in the name I was expecting something more substantial. Felt cheap.

Reviewed by dcotom from Iowa

4.6/5  rDev +33.7%
look: 4.5 | smell: 5 | taste: 4.5 | feel: 4.25 | overall: 4.5
I know I'm going off the reservation with this one, but it delivers what it promises and in a big way. Sampled cold from a tumbler, poured from 11.2-ounce bottle. Dark chestnut colored body, with a thick tan head. Good retention and lacing. Huge aromas and flavors of toffee and caramel, like a dessert fresh from the oven. Medium mouthfeel, not too sweet and just a hint of bitterness. Well balanced. Sticks to the palate on the finish, leaving a pleasant aftertaste. Better when served cold. This is some delicious stuff, well deserving of a place on your holiday table.
Dec 18, 2018

Reviewed by BishopJ from Pennsylvania

3.45/5  rDev +0.3%
look: 3.5 | smell: 3.5 | taste: 3.25 | feel: 4 | overall: 3.5
Look—good, nice brown ale color.
Smell—toffee sweetness predominates, followed by the bitter ale. If you like sweet in your beer, you can enjoy it here.
Taste—two tastes in a row. You taste the toffee first (reminded me of Universal Studios’ Butterbeer), with a quick ale bite at the end.
Feel—smooth, low carbonation as expected in a British bitter.
Overall—bitter is my favorite type of beer, so imagine my thrill of finding this at my local. I’m not a fan of anything too sweet and this beer sort of splits the difference. I can well imagine that this beer might polarize folks into two camps. Not sweet enough for some and too ‘twee’ for others. I enjoyed it, though. Would be a great beer over dessert or at the end of a long day.

Reviewed by Offa from California

Aroma is brown bread, dark dried figs, DR.Pepper, a bit sweet in an odd way, with some toffee/caramel. Pretty good.

Taste is odd, acridly shapr very burnt sugar, bitter, dry, thin of feel and character.
It does have something of a sticky toffee pudding character in smell, if not taste.

3.52/5  rDev +2.3%
look: 4 | smell: 3.75 | taste: 3.5 | feel: 3.25 | overall: 3.25
From the 12 oz bottle in a snifter. This decent English brown ale pours a
medium dark murky brown with a very nice head of off white foam that
settles to a thick ring, thin pooling layer, and displays some excellent lacing.
nose of nutty malts and toffee with touches of brown sugar. Flavors are
pretty much a let down from the nose with muted toffee and subtle cream
with touches of weak brown sugars and a more assertive hop that was
not detectable on the nose which is odd for an English ale from such a
great brewery. Very effervescent mouth feel; medium light body, medium
high carbonation that is bubbly, and a seltzer water like finish.

Overall, a decent brown but outside the norm for the style.

T - Starts with a quick hit of candied caramel toffee cream which quickly gives way to some delicate roast bitterness that carries through until the end. Ends with mild bitterness, some dark fruit, and a hint of caramel toffee and some sugary cloying on the very back of the tongue. Some light earthiness.

O - Glad to have tried once.

Rated by Satan_Presides from New York

3.28/5  rDev -4.7%
look: 3.75 | smell: 3.75 | taste: 3 | feel: 3 | overall: 3.25
Poured from just over room temp. Pours a nice brown with good head. Nose is pretty spot on - toffee pudding! That's pretty much all I get, other than chocolate. Taste is not quite what I expected. A bit bitter up front, with a weak toffee pudding flavor. Kind of like a weak burnt brown sugar, but bitter. Could definitely be sweeter and thicker. Higher ABV would have done wonders. Mouthfeel is light and a bit watery. Overall, not horrible.
Mar 31, 2018
Rated: 3.81 by TheBrewsky from California

Reviewed by Krajnyak from Pennsylvania